Struggle with Self Identity in "Girl"

Many people struggle daily with their own identity. It can be hard for most to express theirs due to pressure or lack of acceptance from friends, family, and society. This theme of identity struggle is explored in the stories told by Girl, Trying to Find Chinatown, and Mistaken Identity.

Girl by Jamaica Kincaid highlights the passing on of identity between mothers and young daughters. In a single sentence of dialogue, a mother relays life advice, such as how to uphold a household and act around other community members.

Don't use plagiarized sources. Get your custom essay on
“ Struggle with Self Identity in “Girl” ”
Get custom paper
NEW! smart matching with writer

Although the girl in the story seems to be very young, her mother is already worried about her future promiscuity. She projects the idea that her daughter’s reputation, possibly hindered by expressing her sexuality, will determine her level of respect in the community later in her life, and therefore must be repressed. Most of her advice is focused on maintaining a respectable front, such as being a good housewife and how to speak to people her daughter may not completely like.

The mother struggles with hoping her daughter will one day make her proud by following her advice.

The mother’s dialogue is interrupted only twice by her daughter – once to defend herself, and once to ask a question. The daughter has to defend herself against her mother’s practical, but borderline caustic advice. She struggles with one day being a young woman unable to express herself in her community in fear of losing respectability. She will one day be unable to express her sexuality, how she feels about people she doesn’t like, or overall act herself.

Later in life, she will likely struggle to find herself due to suppressing so many aspects of her identity as woman.

In Trying to Find Chinatown, David Henry Hwang spotlights ethnic identity as opposed than Kincaid’s theme of gender identity. In his play, two men have an encounter in New York City in which they end up learning a lot about themselves. A blue-eyed, blond-haired man named Benjamin approaches an Asian American named Ronnie for directions to Chinatown, revealing his ignorance. While he may not have been actively trying to find an Asian person to give him directions, he likely subconsciously believed Ronnie would be his best bet. Initially offended by what he perceives as a racist request, Ronnie questions why Benjamin immediately assumed an Asian American would know where Chinatown is. This leads to a dialogue in which Benjamin reveals his own Asian American identity, as he was adopted by an Asian American family. Thanks to Ronnie immediately calling out this stereotyping, he ends up finding out more about an integral part of himself.

Having majored in Asian American studies in college, Benjamin educates Ronnie on the subject, who was knowledgeable about it prior to their encounter. In turn, Ronnie opens Benjamin’s eyes to his own racist actions. Both men learn that they had been mistaken in the past about their own identities, and have each fallen victim to the danger of stereotypes.

Sharon E. Cooper begins a discussion of sexual identity in her play Mistaken Identity. When a closeted lesbian woman named Kali is set up on a date with a straight man named Steve by her brother, she ends up revealing her secret and opening up a discussion about why she has suppressed such an essential part of herself for so long.

Steve learns Kali has kept this part of her identity suppressed due to the disapproval of her Hindu culture and family and the threat of not seeing her nieces again. Kali is afraid of rejection and scorn. She suggests she told Steve, a stranger, in secret hopes he would relay that information to her brother. Deep down, she wants him to know. The story Cooper tells reflects how people’s identities are often mistaken at surface level, and there is always a deeper story to be told. Kali’s story is unique because while she has already found herself and knows her identity, she must grapple with expressing that part of herself to the world.

My own struggle with finding my identity stems from being the oldest child in my family. When I was four years old and my younger brother was born began a lifetime of striving to meet my parents’ expectations of being the elder sibling. I could never make a mistake, always had to be perfectly responsible and mature, while my little brother was the one who got to make mistakes and not have to sweat it. While I shed tears over my first B in school, or was grounded for the one time I was tardy in elementary school, he was applauded just for passing assignments and allowed to skip school entirely when he pleased. These two polar opposite expectations were a result of my parents’ stereotyping and who they thought we each should be due to our birth order. Once I went to college my eyes were opened more to who I am allowed to be. I can make mistakes and it’s not the end of the world, but finding my identity is still a process.

Almost all people are in the process of finding themselves whether it be expressing who they already know they are to friends and family such as in Mistaken Identity, or learning how to be their own person in a repressive society like the daughter in Girl.

Struggle with Self Identity in "Girl". (2021, Dec 02). Retrieved from http://studymoose.com/struggle-with-self-identity-in-girl-essay 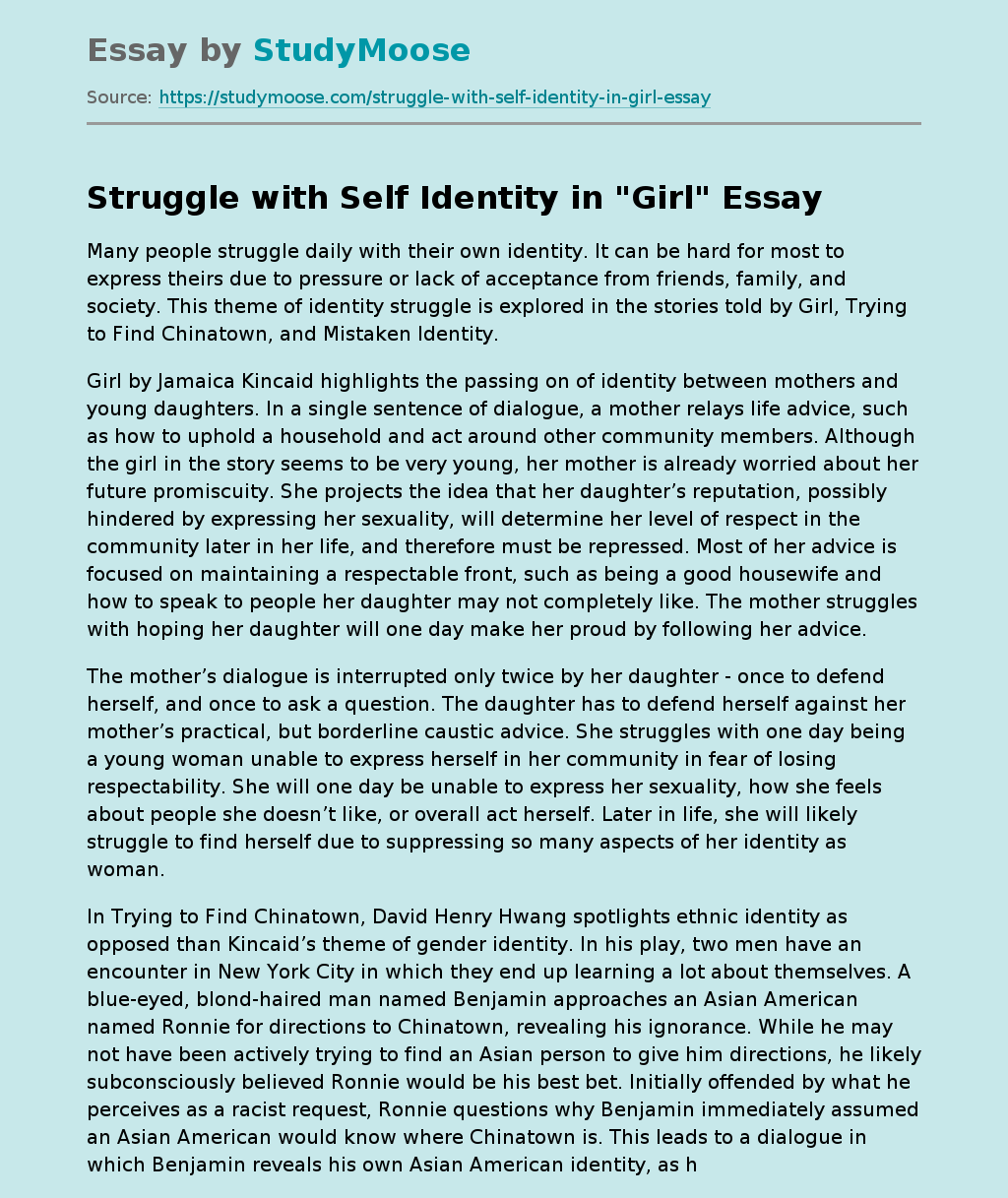