Leanita McClain, an African American journalist, was greatly acknowledge as a black African American middle class success. McClain was condemned by her own peers and was pated on the head by whites who believed her success was only based on talent than affirmative action . Due to prejudice whites and berate blacks, Leanita was forced to choose between the envy of her own race or for her own amentities. In McClain’s essay, “The Middle Class Black’s Burden, She uses percise Rhetorical Strategies to express her burden.

Those strategies are Compare/Contrast, Author’s Tone, and Logical Appeal.

McClain uses the rhetorical strategy of compare/contrast to depict her burden. McClain compared her lifstyle of her childhood to her success as a middle class black woman. Leanita was castigated by her peers simply because they felt she sold out her nation to work as a middle class african american. Others felt that she forgot where she came and that she characterized herself as white instead of black.

In her essay she stated ,” It is impossible for me to forget where I came from as long as I am prey to the jiv hustler who does not hesitate to exploit my childhood friendship”. With blacks passing judgements, a heavy burden was placed on the back of Leanita. This Rhetorical Strategy was very effective because it helps the reader understand how her life as a lower class affected how her life was as a middle class.

The second Rherorical Strategy McClain uses to express her burden was tone.

McClain’s tone throughtout essay is depressed and confused. Part of the tone is confused becuase McClain doesnt know if she should stand aside her nation or pursue her career in the middle class. It also shows depression because both sides are nagging at her and making her feel as if she’s unwanted from both. In her essay it she states, ” I have a foot in each world, but I cannot fool myself about either. I can see the transparent deceptions of some whites and the bitter hoplessness of some blacks. This rhetorical strategy was effective because it displays how the author’s depression she felt througout her life.

The last Rhetorical strategy McClain uses to depict her burden was Logical Appeal. All three were used for the reader to understand why she feel she’s torn between two worlds. In her essay McClain mostly uses ethos and pathos to explain her burden. Being an african american journalist in chicago, made her appeal as a figure that people would consider. However, judgements from blacks made her feel indifferent. In Mclain’s essay, My Turn, she states, ” Some of my liberal white acquaintances pat me on the head, hinting that I am a freak,[…] , I may live among them, but it is difficult to live with them. This personify her chose of rhetorical strategies. This strategy is effective because it helps the reader percieve the choice of words the authors uses. 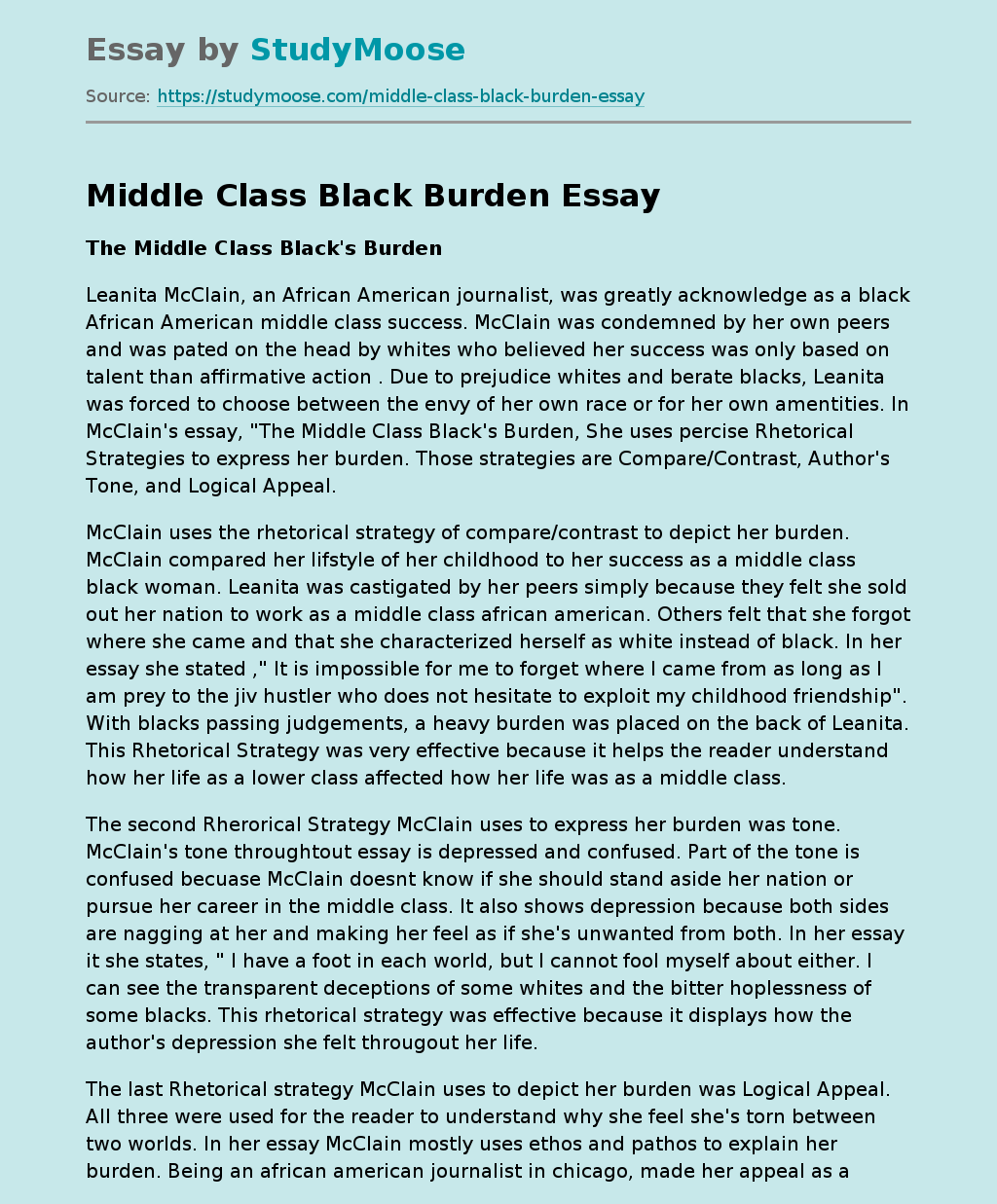