In the book “The Absolutely True Diary of a Part Time Indian” by Sherman Alexie, Arnold Spirit the main character struggles with being an Indian and going to Reardan, the all-white school where he wants to find hope. He struggles with acceptance because of his disability and he is an Indian. He also struggle with losing his best friend Rowdy as a friend, and he also struggles with losing loved ones. Though he has many, he copes with them and fixes them in the end.

Don't use plagiarized sources. Get your custom essay on
“ Absoulutely True Diary of a Part Time Indian Struggles of Arnold Spirit ”
Get custom paper
NEW! smart matching with writer

Throughout the story Arnold struggles with his disability. He is a very smart person but because of his disability his appearance makes him look like he is stupid. To top this all off he is also an Indian attending an all-white school. This causes the white people to make fun of him as well as the Indians and he feels different and unwanted by everyone. “And once I arrived at Reardan, I became something less than less than less than Indian.

Those white kids did not talk to me. They barely looked at me”(83). This shows that he was not accepted on the reservation as an Indian or at Reardan because of what he was. He had no friends at Reardan, not even a friend on the rez anymore.

When Arnold decided that he wanted to go to Reardan he wanted his only and best friend, Rowdy to go with him. When he told Rowdy about going to Reardan he felt like Arnold was abandoning him.

He got really upset and angry and made it clear they were no longer friends. “I stayed on the ground for a long time after Rowdy walked away…But I had to stand eventually, and when I did, I knew my best friend had become my worst enemy”(53). This shows that Rowdy resented Arnold so much for going to Reardan he didn’t want to be friends with Arnold anymore. In addition to losing his best friend he lost many other people, only in a different way.

One final struggle Arnold faced was losing many loved ones. He lost his dog, grandmother, Eugene (His dads best friend) and his sister. He not only blamed himself for the deaths but also many others blamed him because he left the rez and betrayed them in a way by going to Reardan and making friends with white people. “‘Your sister is dead because you left us. You killed her.’…Rowdy was right. I had killed my sister…It was all my fault”(211). This shows that Arnold felt like in a way it was his fault and some of the Indians on the rez felt the same. He blamed himself for every bad thing that had happened all his life.

Arnold had a tough life, he struggled to fit in, to keep his best friend and with losing many loved ones. Arnold slowly made friends at Reardan by just being himself. In the end he and Rowdy made up. They put the past behind them. Arnold also forgave himself for all the loved ones he lost; he also hoped that everyone else forgave him too. Losing loved ones is a normal part of life. No one should take the blame when it was never their fault. Making friends is also hard Especially when you are in a completely new environment or you are shy. Sometimes best friends will fight. It can last for a short time or a long time. Its important to remember we can not judge someone because of who they are or where they come from. Put yourself in their shoes; how would you feel? 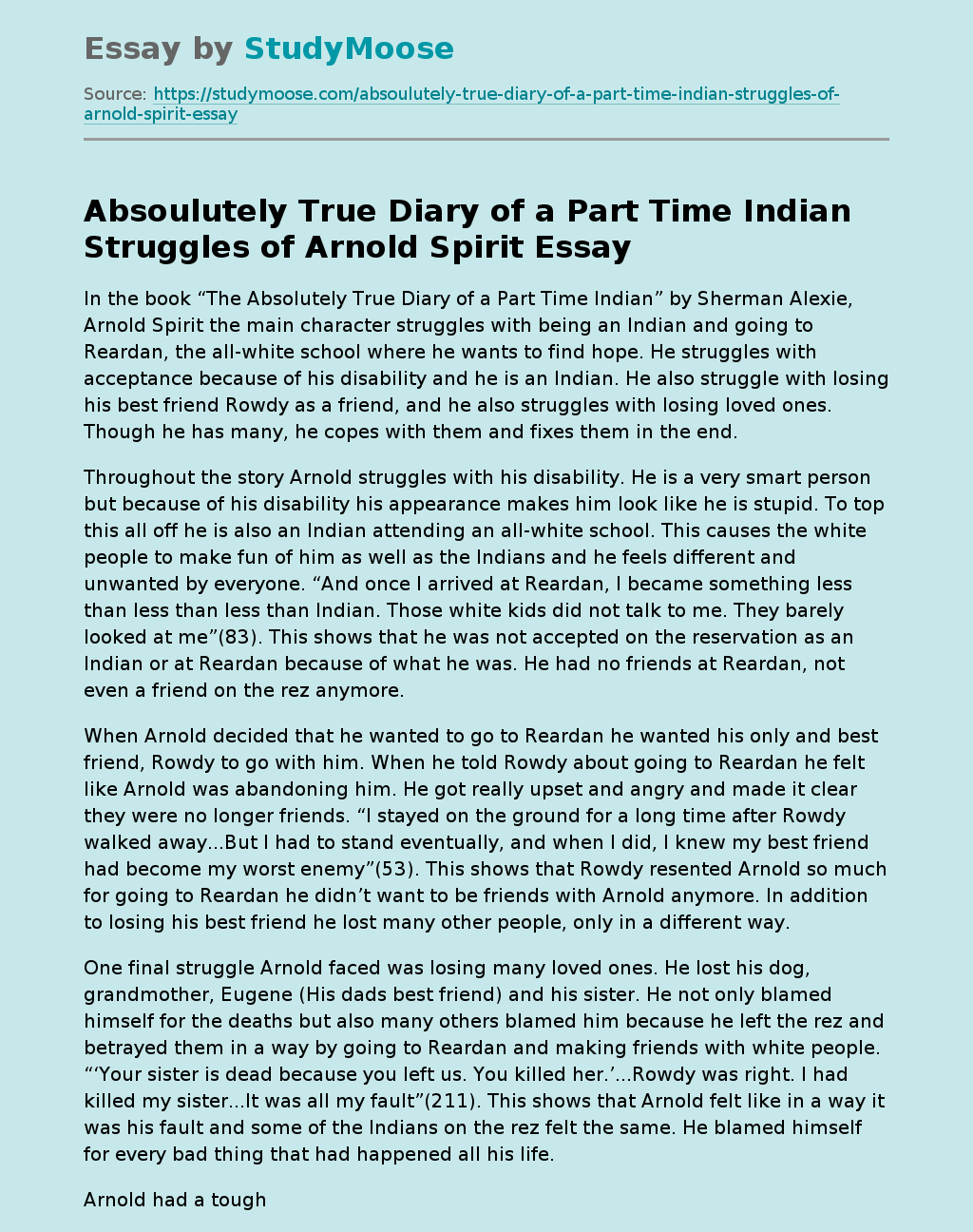