The story of The Metamorphosis is one of loneliness and horror

The story of The Metamorphosis is one of loneliness and horror. Kafka wrote in a fashion that allows a reader to interpret the story in a way that may be different each time it is read. Gregor Samsa, a young, hard working man, is transformed overnight into an insect and his entire world, has been turned up side down. The purpose of his existence is only to serve his family, but he never really gets the respect he deserves. The story describes how unappreciated Gregor is being treated which reveals the existence of selfishness and selflessness within the Samsa’s family.

Don't use plagiarized sources. Get your custom essay on
“ The story of The Metamorphosis is one of loneliness and horror ”
Get custom paper
NEW! smart matching with writer

Gregor is very important to the family’s welfare. As being the only working member, he has no choice but to take care of all the family responsibilities. For so long he wants to quit his work, as he complains on page 4 “oh God, what a grueling job I’ve picked… I’ve got the torture of traveling, worrying about changing trains, eating miserable food at all hours, constantly seeing new faces, no relationships that last or get more intimate.

” But he persuades himself every time by saying, “Besides, I have to provide for my parents and my sister”.

Gregor knows that the future of the family is dependent on him, thus he selflessly gives up his own interest and is enslaved by all of these obligations he has been given. But the family never concerns about him, all that mattered to them is what Gregor is able to provide.

Mr. Samsa puts the entire burden of the family on Gregor and treats him as a creature rather than his son. He informs to the manager about Gregor on page 10, “that boy has nothing in his mind but the business”. He never really understands Gregor and not even has the intention to.

After Gregor’s metamorphosis, the characters of each family member are disclosed more clearly by the way they handle the situation. It is deplorable. Gregor is unappreciated in every way. His father, Mr. Samsa feels a great deal of shame by his son’s condition; he reacts in a vicious manner. As described on page 19 and 20, pitilessly Gregor’s father drives him back, hissing and crying “Shoo! ” like a savage. And “from behind, his father gave him a hard shove, which was truly his salvation, and bleeding profusely, he flew far into his room.

The door was slammed shut with the cane. ” This is the attitude Mr. Samsa has throughout the rest of Gregor’s tormented life. Mrs. Samsa, on the other hand, often shows guilt and remorse throughout Gregor’s incarceration. She intends to make Gregor’s “cell” as comfortable as possible for him. However, she never makes any attempts to even meet or speak to her son. On Page 36, when she sees Gregor in his giant vermin form, Mrs. Samsa “cried in a hoarse, bawling voice…

fell with outstretched arm across the couch and did not stir”. She is scared of Gregor deadly, although she tries to live in a state of denial thinking that Gregor will return to normal some day, so she would feel better. But subconsciously, to her, Gregor is no longer her son but a bug. This kills Gregor emotionally, much crueler that Mr. Samsa. Nevertheless, Grete, who starts out as a devoted sister caring for Gregor, turns on him in the end, is actually the one that causes the most pain on Gregor.

She too thinks Gregor will come back, thus she takes care of Gregor selflessly and gives Gregor the hope of living, but once Grete knows that his brother will never turn back, she begins to withdraw from her duties of caregiver and hope giver. Although Gregor is abused and neglected by the people he has so long taken care of. He is still selfless until the end of his life. On page 54, before his death, “he thought back on his family with deep emotion and love” Gregor dies still loving his family. But the response of Mr. Samsa is saying “now we can thank God!

” on page 55. Despite of all the sacrifices Gregor has done and all the comforts Gregor has provided them of, they betray him callously. They are only concern with themselves and fail to realize that part of that insect that they have treated so cruelly is actually their family member. The selfishness of the family member and the selflessness of Gregor has indicated the theme of The Metamorphosis, which teaches us to live our life for ourselves first and others next or we too may end up leading a lonely and unhappy existence in this world.

The story of The Metamorphosis is one of loneliness and horror. (2020, Jun 02). Retrieved from http://studymoose.com/story-metamorphosis-one-loneliness-horror-11242-new-essay 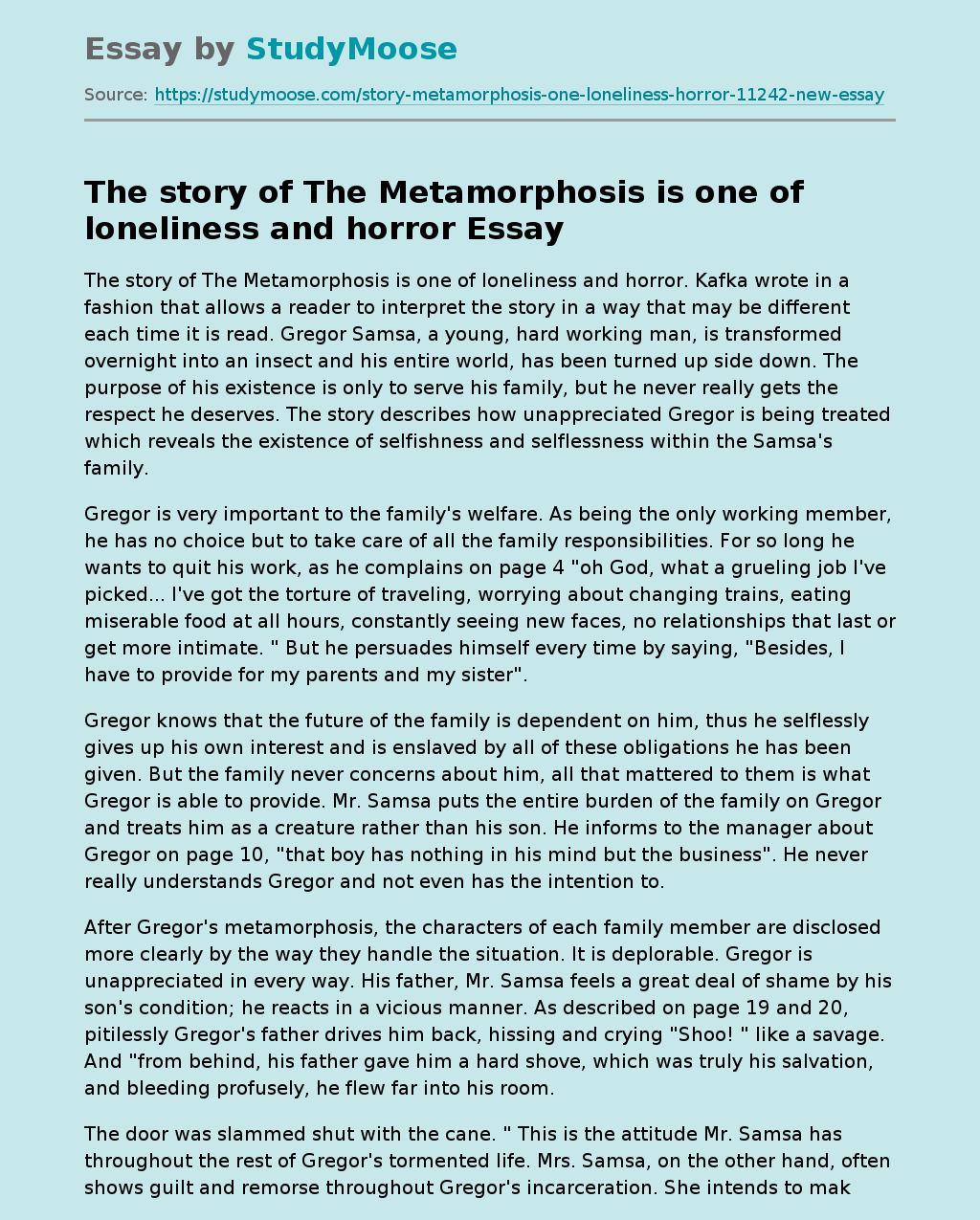