“Sredni Vashtar” Takes a close look into the life and interactions of and between Conradin; his cousin and mentor, Mrs. de Ropp and Conradin’s Ferret and God: Sredni Vashtar. It can be described as a horror story because of its character’s description, themes and setting. It shows the religious downfall of the protagonist, the death of the antagonist and the lack of coherence in society.

Saki emphasises the horror in the main characters, including both the protagonists and antagonists.

Get a verified writer to help you with Is “Sredni Vashtar” a Horror Short Story?

“Conradin” is described as a “ten years old” boy, skinny and sick who “will not live for another 5 years”. It is not a nice image for a boy, and it can either cause sympathy or apathy. However, the fact that he has a “rampant” imagination and he uses it to evade reality, intimidates the reader. The antagonist is Mrs. De Ropp, a high-class elder woman, which is Conradin’s “guardian and cousin”. Even if she does not admit it “she disliked Conradin”, which becomes obvious with some actions and details she has with Conradin, such as killing his hen and friend.

Sredni Vashtar is a ferret, a God and a religion, all at the same time. It’s difficult for a reader, especially if we took into account the social and religious contex, to not feel uncomfortable or intimidated with/by this character. It symbolises Conradin’s religious fail, it kills Mrs. De Ropp and is described as a fierce beast. Also it has complete control over Conradin, even that it’s not a thinking individual.

The maid is the other human character described. She is the contact point with society and ordinary lifestyles, in other words reality. She is described as a clumsy and “foolish” person, who lacked importance. This shows the author’s and protagonist’s opinion of society.

Despite the fact that is not described in detail, the setting has a lot of impact on the reader. First of all, the story is set during fall, the horror season in most cultures. It’s also the time when nature begins to die. The Edwardian mansion is described to have “many windows”, which commonly in literature symbolise eyes. This creates a feeling of constant vigilance, as if Conradin and the reader could not do anything without Mrs. De Ropp knowing. The lack of detail pushes the reader to use his own imagination to recreate the old Edwardian mansion, which can either create more fear or
reduce it, depending on the reader. The “cheerless” garden with “few trees” represents Mrs. De Ropp arid personality and decrepit physical appearance, which emphasises the regret and fear felt for the antagonist. The two main places Conradin spends most time on are his room and the toolshed. The first one is described as been “dark” and the second been at “dusk”. Light represents hope, so Sredni Vashtar, who lives in the tool shed, also represents hope.

The main themes are the children role in the high class society, how the protagonists fails to fulfil them and the consecuences. The reader can easily see the closed social and religious views Saki is trying to criticise: The edwardian high class social standards, based on pride, severe rules and inhuman punishments and the lack of everyday devotion for religion, despite which one. The protagonist contrast and completely break these rules: Conradin hated his cousin, lost and changed his faith, did not had manners and rejected society. As we can observe “Sredni Vashta” represents divinity/God’s fail, in a social context where religion was extremely strong and important in everyday life; This obviously drags reader’s attention. Saki also explores the importance of a close family, which he lacked because, just as the protagonist, he was raised in Burma by hated relatives. In the story Conradin did not have a close and loving family so become into a troubled kid, with psychological, health and social problems.

The language used to describe the protagonist includes a series of techniques Saki uses to emphasise specific characteristics or cause a certain effect on the reader. For example the religious downfall: Saki describes how Conradin thinks “church service was an alien rite” and instead his god was a ferret. Saki foreshadows Mrs, De Ropp’s death with Conradin’s hen death and with the prayers Conradin says to Sredni Vashtar: “Do one thing for me, Sredi Vashtar” This makes the readers pay attention to any details and do not loose interest, as well as creating a horror and suspense atmosphere. The contrast between the “cold afternoon” and the “warming daylight” is a pathetic fallacy which represents Mrs. De Ropp’s hope fading, anticipating her death.

The toast is a symbolism for the pleasure death can cause. This is shown when Mrs. De Ropp tells Conradin about his friend’s death and she offers him a toast, and when Mrs. De Ropp is killed, Conradin prepares himself a toast. The fact that is his favourite meal shows the sick mentality of the character, who celebrates his freedom but also death. Humor, sarcasm and dramatic irony are commonly used by Saki in “Sredni Vashtar”, which develop a creepiness sensation on the reader. For example the maid says after Mrs. De Ropp’s death “Whoever will break it to the poor child?”, this dramatic irony is used to emphasise the fact that society did not understood Conradin, and it’s humorous because the maid was described as a stupid character.

Get a verified writer to help you with Is “Sredni Vashtar” a Horror Short Story? 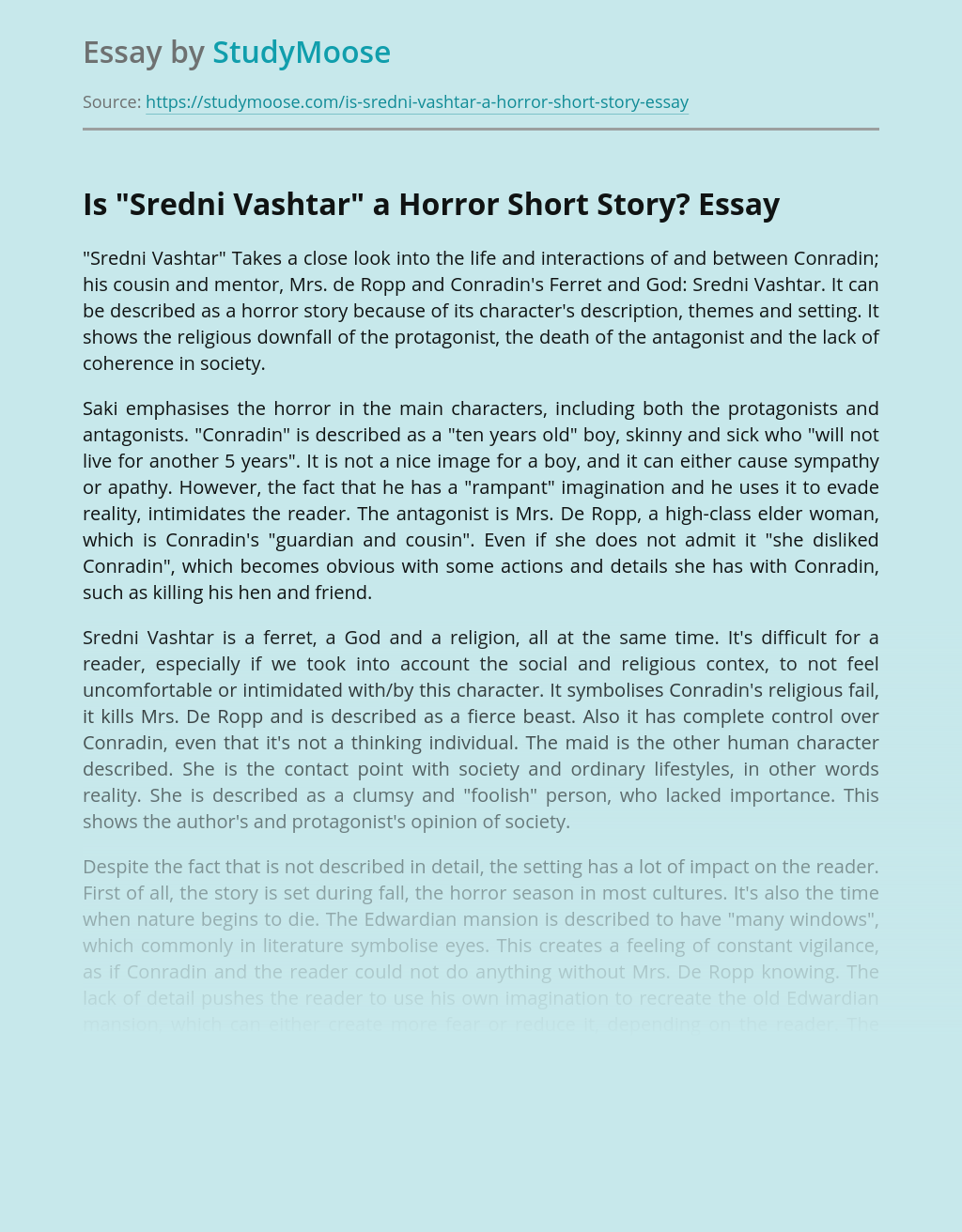 Sorry for the loss - Bridget Keehan

Introduction “Expect the unexpected,” is something that I heard many times. We should follow this rule while reading different genres of writing, because writers use irony to keep readers’ attention, and make their works more interesting. This research paper deals with one of Guy de Maupassant’s short story “The Jewelry” and with his virtuous ability...

Get Essay
Literary Devices in "By the Waters of Babylon"

In the short story “By the Waters of Babylon” by Stephen Vincent Benet the author uses structure to impact the readers understanding of truth by using the literary device Foreshadowing and another literary device situation Irony. “It is forbidden to cross the Great river and look upon the place that was the place of the...

“The Man Who Was Almost a Man” is a short story that chronicles the misfortunes of a teenage boy named Dave, and, unlike some of Wright’s darker stories, this text is a humorous satire. The texts welcomes its audience to come and laugh at Dave, who can easily be seen as a foolish character both...