Society in The Giver by Lois Lowry

The Giver, directed by Phillip Noyce in 2014, was originally a New York Times bestselling novel written by Lois Lowry in 1993. Both the novel and film recount the story of a young male, named Jonas, who lives in an equalized, literally colorless society which limits (controls) both an individual’s emotions and memories (Mitnick, Weide, and Noyce 2014). The narrative focuses on Jonas’s coming of age, where he receives the unique job of the Receiver of Memories (Mitnick et al.

Don't use plagiarized sources. Get your custom essay on
“ Society in The Giver by Lois Lowry ”
Get custom paper
NEW! smart matching with writer

Through interactions with The Giver, whom is the sole guardian of the community’s hidden history/memories, Jonas discovers the world in which he lives is not only corrupt but entirely immoral (Mitnick et al. 2014). Deciding that his community deserves the right to their memories and emotions, Jonas risks his own life to better suit those around him (Mitnick et al. 2014). Through the trials of Jonas and many others within the community, sociological concepts noted within the film include: the presence of a power elite, social controls, and a utopian society.

Proficient in: The Giver

Within The Giver, the sociological theory of power elite is the driving force behind many of the overbearing rules and policies within the community. Giddens et al. (2017) defines power elite as: “a small network of individuals who, according to C. Wright Mills, hold concentrated power within modern societies.” In Mill’s portrayal of this concept, the power elite are composed of predominantly Caucasian individuals as well as those who have closely connected concerns and ideologies (Giddens et al. 2017). Within the film, the term power elite is homologous to a group coined The Elders, particularly observing the Chief Elder.

When examining the racial diversity of the aforementioned group within The Giver, there simply is no diversity: all of the individuals are middle-aged, white, men and women, which directly aligns with Mill’s theory (Mitnick et al. 2014).

The Elders not only hold an abundance of patriarchal ruling power over the community but can manipulate the environment and its constituents in various degrees. For example, memories of objects as simple as a slay or snowflakes have been erased from the community’s consciousness to allow for management of emotions (Mitnick et al. 2014). Not only does the power elite (The Elders) within the film limit the human experience, but the patriarchal group decides which infants will when an individual dies and which infants are kept to be introduced into their perspective family units (Mitnick et al. 2014).

Other factors that Mill’s eludes to within the description of power elite but are not present within the film include: business interests (to increase individual net worth) and lateral mobility between leadership positions/roles (Giddens et al. 2017). It is also noted that if a presence of power elite is probable, the institutional centralization most likely occurred, encompassing political order, the economy, and the sphere of the military (Giddens et al. 2017). Within the film, The Elders are the power elite, the political force, behind the rules and policies that impose social control onto the community and its constituents.

For example, within the film, all societal members are expected to receive daily immunizations which regulate an individual’s emotions; however, when Jonas convinces Fiona to skip her immunization, she begins to see that their society is restrictive in ways she is yet able to comprehend or describe (Mitnick et al. 2014). The previous sentence is an example of an external social control due to Fiona’s defiance from policies subjected on her by The Elders; her non-democratic sentence due to the corruption in the power elite, jail time and ultimately euthanasia (Mitnick et al. 2014). However, when Jonas begins his journey to the outer rim, to release the memories, Asher [who is one of Jonas’s best friends] forgoes an internal social control, particularly demonstrating compliance (Mitnick et al. 2014).

Ordered by The Chief Elder to find Jonas, Asher complies with her demand to avoid any potential punishment despite betrayal of his best friend (Mitnick et al. 2014). Other social controls that are regulatory in nature and viewed throughout the screen play include: receiving a bike at nine (forbidden to ride younger), obtaining an occupation at 18, and a prompt eating and nighttime schedule/curfew (Mitnick et al. 2014). The aforementioned controls are enforced by The Elders for the supposed betterment of society and were cultivated through observational learning in which a behavior is motivated by observing others [behaviors] and its respective consequence (Dykstra-Crookshanks 2018).

The final sociological concept within The Giver is the basis of the films setting and aids in the development of the previously mentioned sociological factors, a utopian society. Characteristics of an utopian society include: a controlled size/development, regulation of weather, abundance of green and common spaces, proximity between functions, and limited stratification, among others (Dykstra-Crookshanks 2018). The overarching goal of an utopian society is to change a societies culture and improve upon lived experiences within the community (Dykstra-Crookshanks 2018). Within the film, the setting created by the director, Phillip Noyce (2014), is a picturesque image of an utopian society, containing bright, vivid green spaces with shrubbery that is cut to perfection and white geometric buildings that are sleek and efficient (Mitnick et al. 2014).

With this excess green space, comes a gathering of people to “common spaces” in which kids play and ride their bikes, of course only once nine years old (Mitnick et al. 2014). These visual aspects/ques of an utopian society may have not been possible if regulation of weather, including sunlight, temperature and rain were not attainable. The size of the community also aligns with the ideals of a utopian society in which all members can either walk or ride their bikes to and from work (Mitnick et al. 2014). Lastly, there is an equalized stratification of not only wealth but goods to each household/person such as food and even children within family units (Mitnick et al. 2014). However, as stated in the plot summary, this “perfect” society is based upon false ideals and essentially does not contain lived experiences due to a reduction in consciousness and overall memory formation.

The Giver directed Phillip Noyce, contains various sociological aspects throughout, but focuses on three primarily concepts: the power elite, social control, and an utopian society. Within the film, the sociological concept of power elite is delineated through the political power of The Elders; primarily the Chief Elder, who impacts the decision-making process of not only Jonas but his friends throughout the entirety of the screen-play. Also, social controls were used as both regulatory and punishment mechanisms and were depicted in two different subsets: Internal and external controls (Dykstra-Crookshanks 2018). The objective of these controls, to keep order and structure in not only Jonas but the entirety of the community. Lastly, the screenplay setting mirrored that of an utopian society. The “perfectness” of the setting, including the manicured lawns, modern yet simple housing, and equalized stratification of goods and resources was the picturesque example of an utopian society; yet fell short when examining the communities false ideals conjured by The Elders.

Society in The Giver by Lois Lowry. (2021, Dec 02). Retrieved from https://studymoose.com/society-in-the-giver-by-lois-lowry-essay 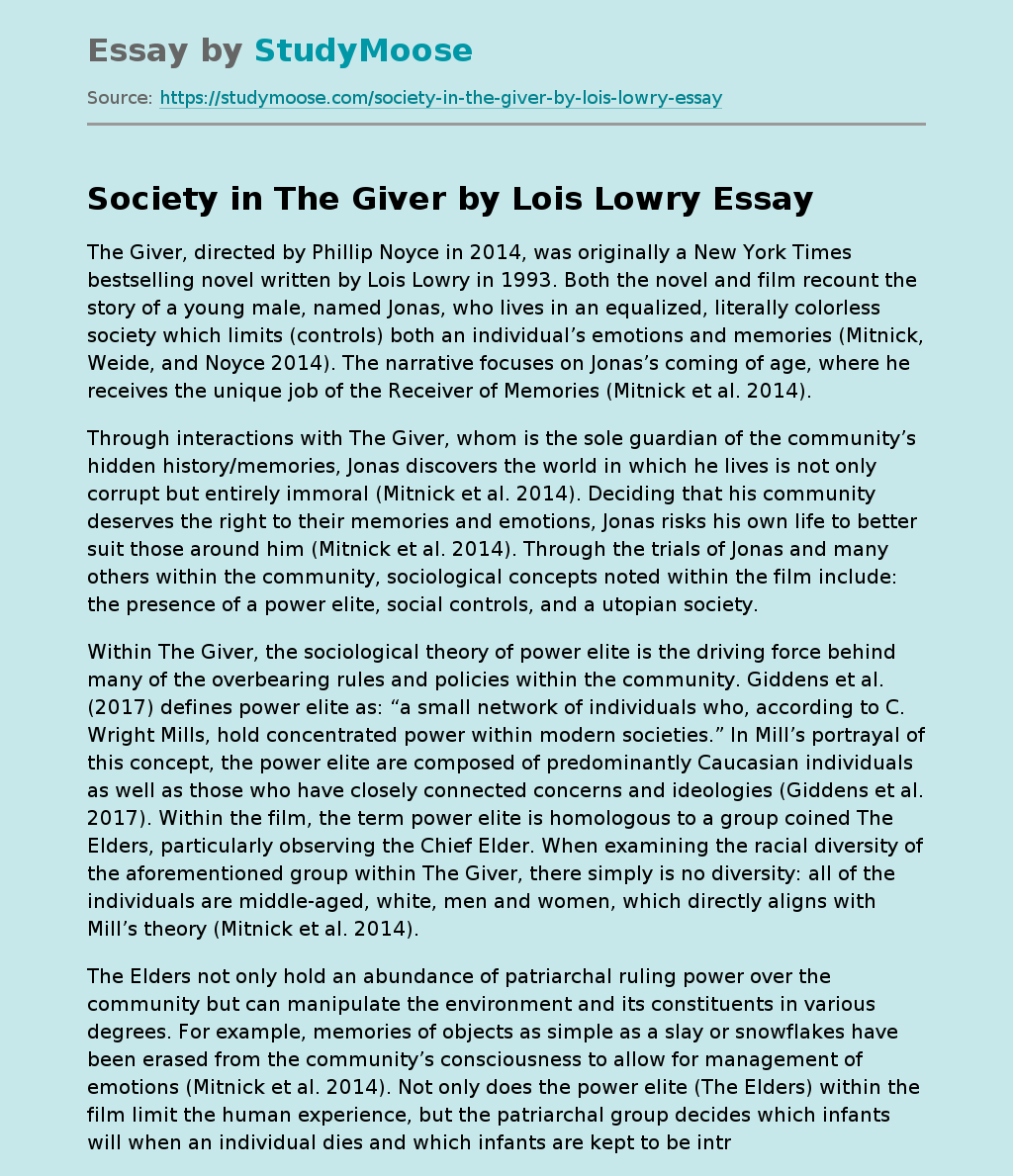