Summary of Novel The Giver by Lois Lowry

At the beginning of the story it begins when Jonas the main character was selected to be the Receiver Of Memory when the Chief Elder explained that the community only has one Receiver, who will train Jonas personally. The Chief Elder also explains that ten years ago, the previous selection of the old receiver failed, so they have selected Jonas because they couldn’t have a second failure. The Chief says that the Committee chose him after years of observing him and that they have had no wrong doubts about his selection.

Don't use plagiarized sources. Get your custom essay on
“ Summary of Novel The Giver by Lois Lowry ”
Get custom paper
NEW! smart matching with writer

Jonas has shown intelligence, truth, and courage, which is The Receiver job. The Chief also warns Jonas that he will face pain and sadness beyond what the rest of the community has experienced. As the Receiver, Jonas has the ability to gather wisdom during his training and finally, he has the power to see beyond, which neither he nor the rest of the community has seen.

Afterward Jonas became the Receiver he meet the Receiver (The Giver) and they both began to start out easy, the giver gave Jonas a happy memory which was the first time seeing a rainbow for the 1st day of training, then the giver started to give him harder painful, and sad full memories, hunting elephants, being burned, hunger, and a battlefield, the giver never wanted to give Jonas those hurtful memories, the giver believes that Jonas is not ready to be a Receiver Of Memory, He doesn’t want him to end up like the Old Receiver Rosemary she could deal with all the pain and suffer neither and wanted to quit which she couldn’t because that’s against the law so she went to Elsewhere and hasn’t come back.

The giver still has memories of her playing the piano with him when she was the receiver.At the end of the book When Jonas found out about everything about the Community secrets and what the chief could do to him if he tell his friends about love, color, or having fun with a sled, also when he found out that his father that takes care of newborn babies and Jonas’s father is going to kill a baby boy called Gabe for being different from the other babies in the nursing room, Gabe wouldn’t stop crying and he was different from the rest.

When Jonas found out he couldn’t let Gabe die so Jonas took Gabe and protected him from the evil community and tries to leave the Community boundaries to go in Elsewhere, which Jonas cannot allow this to happen, so he takes some leftover food and his father’s bicycle, which has a child seat, and leaves, on his own courage and strength instead of on the memories that the Giver had promised. Jonas has broken serious rules against leaving at night and taking food. Jonas and Gabe eventually see waterfalls and wildlife, and when Gabe saw a plane, Jonas realizes that the toddler has actually seen a bird. The experience of animals and wildflowers after a life of Sameness makes Jonas extremely happy. At the same time, Jonas begins fearing starvation. However, he also knows that he could not have stayed in the community if even to remain well fed. He never would have had love a real color, and Gabe would have been dead. When Jonas finally sees hills, it is difficult for his sprained ankle to control on a bicycle, and the weather with cold rains makes the journey harder. Both Jonas and Gabe cry in their hunger and weakness and Jonas fears that he will not be able to save Gabe, let alone by himself.Jonas begins to sense that he is approaching to Elsewhere.

However, he realizes that he might not make it, now that they are faced with snow. Jonas stops his bike and holds Gabe against his chest while they huddle in the blanket. He tells the scared, hungry toddler about snowflakes before grabbing the bicycle and making an attempt to climb a steep hill. Exhausted, Jonas thinks about how easy it would be to go to sleep in the snow, but he pulls himself together and gives Gabe a memory of sunshine, although it is much weaker at this distance from the community. They hug each other, feeling briefly new, and Jonas begins to walk up the hill. The memory fades after a few moments, but Jonas forces himself to continue, his will to survive the snow. After he falls due to lack of strength, he again manages to find a memory that he passes to Gabe, but when the memory fades, he feels colder.

Jonas wishes The Giver had given him more memories of warmth. He continues to the top of the hill. His exhaustion body was tired, but he suddenly feels happy, remembering his family, his friends, and The Giver, and as he reaches the top, he feels certain that he knows this place, although it is not from The Giver’s memory. He finds the sled at the top of the hill and sleds down the hill with Gabe, heading toward a place that he knows will be Elsewhere. Finally, he forces his eyes open and sees Christmas lights in front of him. He hears music and singing for the first time, and he even thinks he hears it from behind him in the place he left, although this might only be an echo.The song that relates to Jonas leaving the community was Somewhere over the Rainbow. This song related to Jonas, when he wants to go past the other side of Elsewhere, so people can see the memories of the past. This song is going past the rainbow, like Jonas is going past the boundaries

Summary of Novel The Giver by Lois Lowry. (2021, Jun 20). Retrieved from http://studymoose.com/summary-of-novel-the-giver-by-lois-lowry-essay 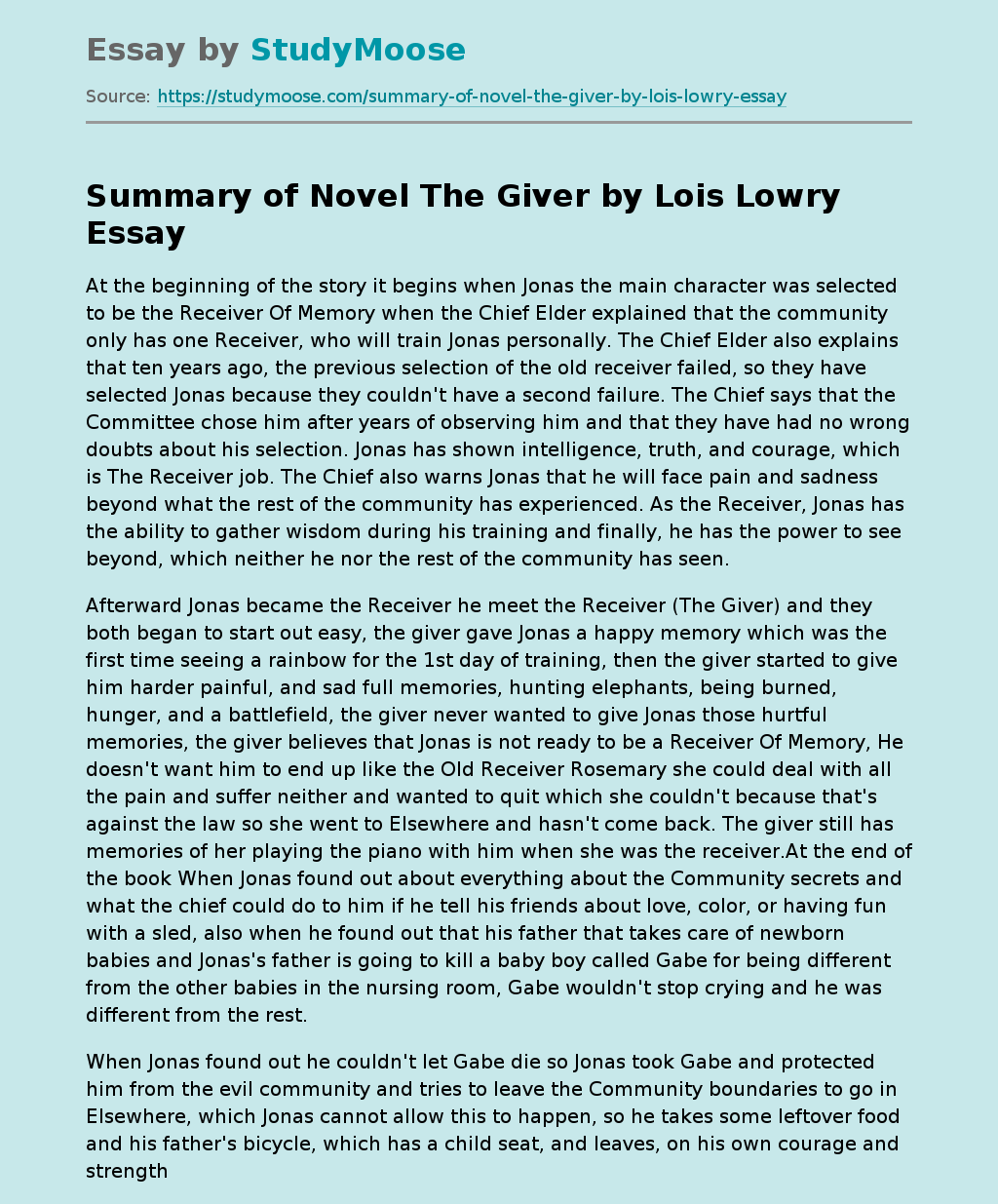