One of the lesser characters of Shakespeare’s play, King Lear, is the character of Edmund. Edmund is the illegitimate son of Gloucester and was loved despite being a bastard child like his brother. In any good play about tragedy, what makes it work is the villain or the emissary of evil. Despite the equal love that was given to him, he plotted to frame his brother as the one who would murder their father. He was willing to betray his father to please the sisters, Goneril and Regan.

He is also the cause for the rivalry between the sisters.

Edmund’s character is opportunistic and short-sighted. His ambitions will lead him to join forces with Goneril and Regan. The injustice done to the situation of Edmund has failed to justify his succeeding actions. For a moment, his illegitimacy may evoke sympathy but it will quickly disappear once his true character is known. Edmund rejects the laws of society to follow the laws that he views as more practical and useful to him which is strength and cunning.

His desire to use any way possible to meet his needs make him depict a villain who has no conscience.

To get rid of his father, he pretends to be regretful and states that his nature which is to honor his father must give way to the loyalty that e feels towards his country. Edmund, along with Iago in another one of Shakespeare’s plays, Othello, is one of the most famous villains of Shakespeare’s literary works and there are often comparisons between the two villains.

Although there really are similarities between the two, there are also differences that make them distinct from each other. While Iago was born with nobility, Edmund was an illegitimate child.

This fact is what haunts him. The goal of Iago is clear. He intends to bring down the one who angered him. The task of Edmund was even more difficult. In order for him to succeed, he has to bring down the whole community. He has to change the world where being an illegitimate child is acceptable. Both Iago and Edmund have never felt love for anyone but themselves. They don’t treat the women that are close to them nicely. They are only using the women as a means to promote their own evil interests.

Yet Edmund’s very personality has attracted the evil sisters because they consider him a dangerous man. The sisters wanted to play with fire. Both Iago and Edmund were willing to do their best to have power and control everyone around them. In the end, when both of their plans have fallen apart, Iago has remained unrepentant whereas Edmund has shown remorse and regretted his actions. Edmund’s motivation and driving force is to fight against those people who are in power, the traditional beliefs and values and the society in its structure.

He believes that the revolution would be a worthy cause and all his planning will put him in power and be the one sitting on the throne. Edmund would probably like to rule alone but he admitted to himself that he needed a queen which was either Goneril or Regan in order to produce an heir to the throne but he is neither worried nor concerned if both women would kill each other. When Edmund realized that Edgar has wounded him fatally, he is comforted with the fact that the one whom he considers an equal was the one who would kill him.

Edmund tried to reverse the death sentence that he had ordered on Cordelia. He is quite fatalistic about his impending death. He just waits for death to take his life for he soon thought that his soul is headed for purgatory (King Lear 2008). The play, King Lear, is about an old king who has decided to relinquish his responsibility of running the kingdom and wanted to divide that power and responsibility between his daughters and future husbands. The king would like to enjoy his retirement while he was still being considered a king.

The play describes the impending disasters and consequences that would result from his decision. This was worsened by his failure to recognize genuine love from the false love that is shown by his daughters and those that were around him. The play also tells about the king’s eventual fall to madness and his realization about the true nature of authority and love. It is a play about love, truth and justice that examines the human condition and questions whether there is such a thing as absolute truth or only what is the truth for each self.

It is not only about a king and his divided world but also about a father, his possessions and his three daughters. The central character of King Lear represents the frailty of humans that are of old age. Two of his daughters, Gonoril and Regan reflect the selfishness, duplicity and cunning of man while his other daughter, Cordelia, reflects the values of truth and honesty. The human personality is seen to its depiction of greater degree and the tragedy that the king undergoes because of overwhelming pride as he journeys anger, despair, madness, patience, humility and the realization of the goodness and truth.

King Lear reflects his emotional state on the physical nature and the elements of the weather. He connects the disorder of the cosmos to the disorder in his family resulting to broken relationships. Gloucester believes in astrology and thought that the eclipse was the reason for the breakdown of human society since they produce unnatural effects. He considers the eclipse as the results upon the human beings and he maps out the disorders that is present in human relationships and the disorders in physical nature to elaborate and unconventional means.

King Lear has violated nature and the law of the nations by dividing the rule of his kingdom. His actions have brought chaos to his family, the society and the state. Gloucester in turn has broken his family relationships because of his wrong judgment against his legitimate son. Being against the natural state of things, Edmund breaks the social standard as an illegitimate son and forced the rules of nature and rebelled against tradition. King Lear is also about political authority and will as much as it is about family relationships.

He is not only a father but also a king and when he gives up his throne to the unworthy sisters, Goneril and Regan, he brought not only himself and his family but all of Britain into cruelty and chaos. Edmund begins his rise to power, the kingdom is suffering from civil hardships there is the realization that Lear has destroyed not only his own authority but also that of Britain as well. The stable and orderly manner that Lear reflects has fallen apart and chaos has ruled in their place. 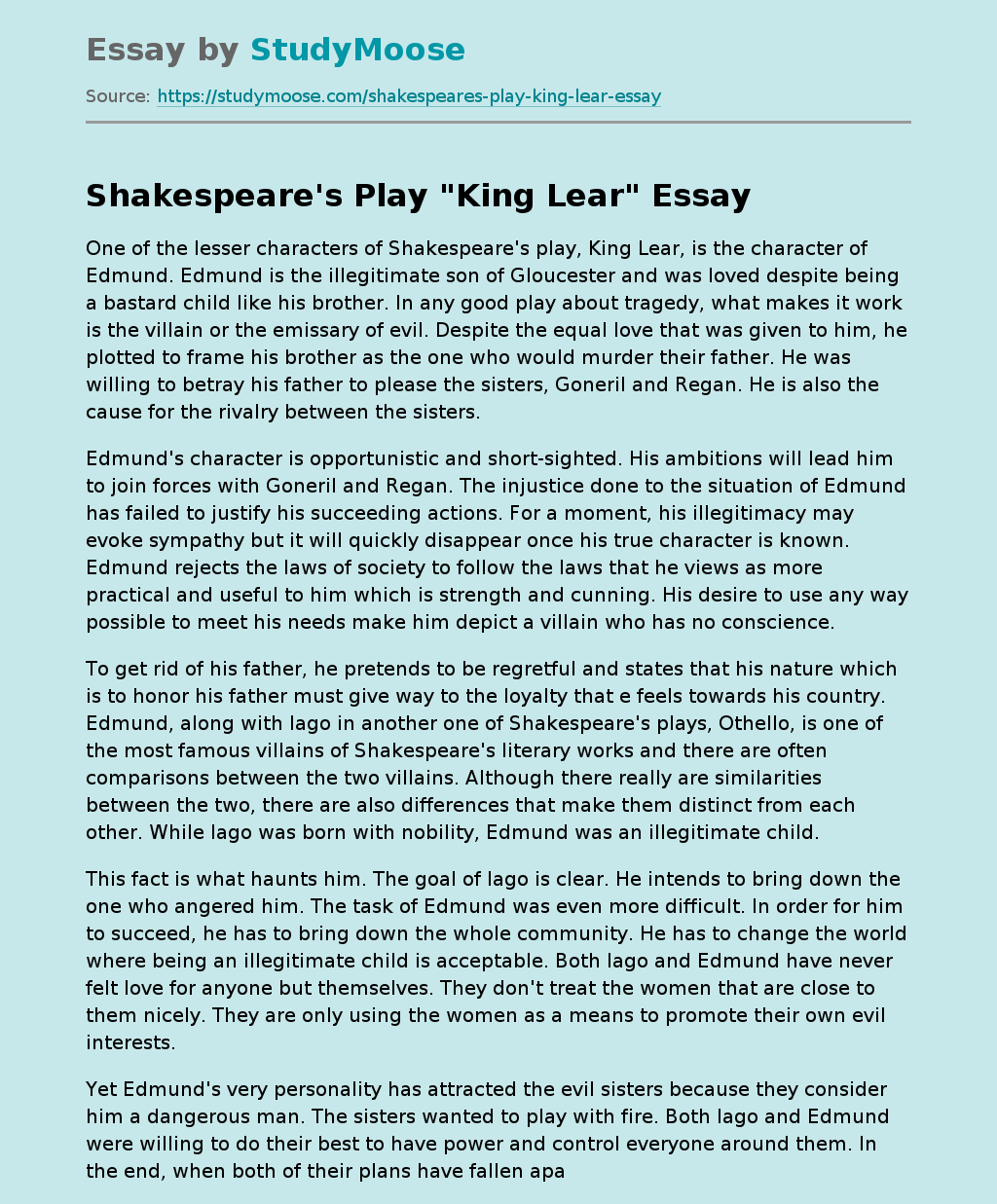