A Mexican Tejano in American Texas

As young Tejano boy who lives in Texas with family, friends, and a community with respectful ordinance and order for law. One has experienced a life drastic change when two frontiers are met in Texas for the demand for independence, land, and property in my land. A Tejano life becomes a change for one when the United States fight in battle for Independence with Mexico, and ultimately change the characteristic and the effects of a Tejano life-for a boy.

What is a Tejano? We are known to be the first descendants to grow families in Texas.

Don't use plagiarized sources. Get your custom essay on
“ A Mexican Tejano in American Texas ”
Get custom paper
NEW! smart matching with writer

From 1600’s through the late 1800’s, Tejano’s are extractions of the Mexican and Spanish groups that first colonized the Texas frontier. I have lived many years in Texas prior to the revolution and I helped create the areas first plaza’s, politics, missionaries, plantations, ranches, and developed roadways. “I am a Tejano!” San Antonio de Bexar where I was born, part of the Spain’s colonial holdings in the New World.

My father Bernardo H. Reyes had immigrated to Texas from the State of Veracruz, Mexico. My father’s European heritage and devoted craftsman skills. My father: Bernardo H. Reyes surged as a forerunner in the society of San Antonio. He devoted his work as a mayor (Alcalde), of San Antonio, Texas to which was heroic to a Tejano son. He hoisted us in the European section of the plaza, and sent my older blood brothers and me to Mexico for better schooling.

In change, school was subject to change for me. My advantages in school came to an end. At the age of 13, my father passed unexpectedly forcing us to return home to supply support to family back home in 1811 and 1813. The Anti-colonial revolutionaries took over many towns as I watched violently defeating our Mexican military. My older brother Danny Reyes,
fought with the Mexican Army, also, helping the rebels in the fights, he was discharged when they discovered the event leading to a Battle of Alaz’n in Coahuila-y-Tejas, on June 20, 1813.

Tejano’s contributed to a stable cultural effect throughout the economic region in Texas. My people ranched and furnished a true historical value to Texas with families cultivated a new transition of a foreign Spanish flag to the Mexican flag. From people who wrote the laws that define Tejano life and also invited Angelo Immigrants-Whites. Tejano life was important in unifying the community for a military purpose of the reconciliation to settle in Texas. Tejano cultures were very distinguished with a very strong sense of community. In 1821, one was told there was a population of 4,000 Tejano’s in Texas. The early Spaniards had originally brought with them a good associating for neighboring brothers-which was identified as the barrio. The barrio was reinforced on the Texas Frontera when the early expeditions came to settle in Texas. People came together as families creating communities around the missions which made Texas a home to Tejano’s to settle. The term “Tejano” has been used to identify ones people and as a Tejano boy historically. I knew that Texas was the heritage of Spaniards to Mexican culture, and is now forced to see a new transition take place-with the United States for Independence.

Between 1821 and 1836, Texas was the land that introduced two frontiers in the Battles of American Military and Mexican Military for Independence, land, and power. Culture and social commerce were competitive during these condemning years. A political dominance for Mexican lands was well-catching when new settlers migrated into Mexico. In September 1810, before the United States migrated, New Spain was afraid that the first movement for freedom would lead to independence by a Mexican Priest named Miguel Hidalgo (My Uncle). His main ambition was to create a movement that would be independent country from Spain. Ending Texas the New Constitution gave a self-governed
province by making a new state of Coahuila y Texas. In 1810 Mexico declared its independence from Spain after a protracted struggle. In September 1821, after three hundred years under Spanish rule, Mexico obtained its sovereignty and became a New Mexican empire. Years after in 1836, the Alamo took battle in the front and in 1846 the Battle of the Mexican American War lasted two years ceding nearly half of its territory from Mexico to the United States. These were The Battle of the Alamo followed by the Mexican-American War in 1846. Changing the political forces during for Tejano’s in Texas.

Anglo is a prefix indicating a relation to English white people in 1821 (“American History”, 2012). When the Anglo Men first appeared in Texas, Tejano settlement composed three areas to separate the regions in Texas. The Nacogdoches region, the Bexar Goliad Region along with the San Antonio river. Each of the population fluctuated independently in its region from others between the Nueces River and the Rio Grande, but shared certain trademarks in many similarities, which was military. Spain closed the Mouth of the Mississippi to foreigners from 1784 through 1795 due to 50,000 Americans settlers crossing. It was difficult to return across the Appalachian Mountains. The Americans were trying to set plantations for their crops in Louisiana and Texas during this time. Thomas Jefferson Threatened Mexico for a war over this new transition. Philip Nolan became the first Anglo American to cross the borders to sell horse trading in Texas but was arrested by Spanish borders. In Mexico City foiled our plans. Mexico was afraid about the reports that American immigrants were flouting Mexican laws and entering illegally, causing the Tejano population to be outnumbered to a rate of ten to one. The Mexican government excluded the importation of indentured servants to Texas and I was then surrounded by angle white settlers.

Conclusion
It is evident that Tejano laws laid much of the foundation for a prosperous Texan society and community. Eventually, American settlers fight for
Independence with Mexico in the Mexican-American War, changing the effects, cultures, and territories-for Tejano’s. Indeed, the history of Texas can never be complete without the story of his origins and founders of an eminent Tejano.

A Mexican Tejano in American Texas. (2016, Mar 23). Retrieved from https://studymoose.com/re-a-mexican-tejano-in-american-texas-essay 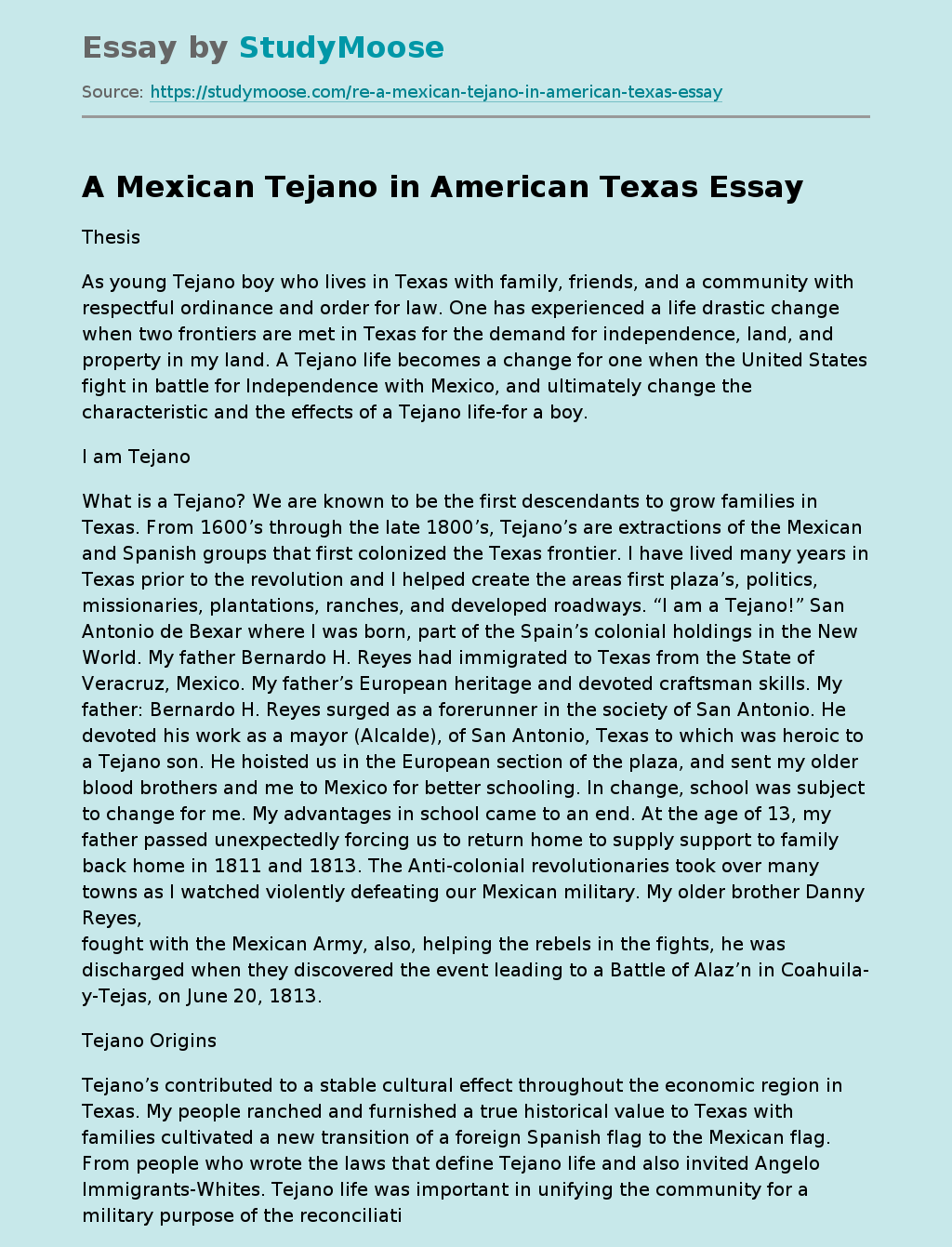