A strong, intelligent man, Martin Luther King Jr., once said, “Our lives begin to end the day we become silent about things that matter,” and what mattered 50 years ago, was finding a sense of equality in the world. That each person could feel as if they were all equal to one another, without feeling misplaced, but at home. King took a stand for people too scared to let their words be heard, taking on the walls that stood between segregation and equal rights.

Don't use plagiarized sources. Get your custom essay on
“ Racial Discrimination ”
Get custom paper
NEW! smart matching with writer

James T. Patterson educates his audience in his article, The Civil Rights Movement: Major Events and Legacies that about 7 million slaves were brought to America in the late 1600s. These slaves were sold to North America from the European settlers. Our country became dependent on the slaves for the production of crops, such as tobacco and cotton (Patterson Par. 1).

Slavery ended in 1865, after the long battle of the Civil War, which began in 1861. The end of the war granted millions of slaves their freedom, citizenship, and the right to vote, no matter their race.

Unfortunately, most white people were not okay with this occurrence, so they created certain laws that were designed specifically to give blacks unequal treatment. Along with these new laws, an organization called the Ku Klux Klan was formed to intimidate and stop the advancement of black people in society.

Segregation then came in to play in 1896, when black people were said to be equal to white people in society but were made to be separated by their color. Whites and blacks all had their designated areas, where the different race could not enter. For example, public restrooms had signs outside that stated which bathroom was for which race to use. Looking from the outside in, there was much realization that specific places for blacks were in bad condition in comparison to places designated to white people.

Oppression was the basis of segregation. Two ladies, named Susan Bohmer and Joyce Briggs, defined oppression as “attitudes, behaviors, and pervasive and systematic social arrangements by which members of one group are exploited and subordinated while members of another groups are granted privileges.” Since black people were separated by the color of their skin, and not given the same rights and privileges as white people, it entitled them to be labeled as oppressed. There are still groups today that experience oppression. (Patterson Par 2).

Eventually, in 1964 the Civil Rights Act gave way to protect citizens from discrimination, by prohibiting segregation in schools, public places, and employment. Within the following year, this act created equal voting rights between races (Patterson Par. 4).

Robert M. Entant explains in his article, The Black Image in the White Mind: Media and Race in America, that after much hardship and fight for equality between races, our nation witnessed the first African American male and female become Secretary of State in 2001. Eight years later, Barack Obama became the first African American to become President of the United States of America. These explicit events gave proof of how far our nation has come to give all races the right to not be discriminated against (Entman 2). Although today many blacks have overcome the white domination, they tend to carry insecurities of their past with them, as they continue to feel lower than the white race.

Many potential students may not want to participate in the lessons provided, for they feel uncomfortable or just do not care about the problem at hand, but will be forced to partake in the lessons. These lessons will be as mandatory as a math class or English class. They will have no choice in the matter, as they need these lessons to improve racial discrimination rates in our society today.

Racial discrimination is a learned accusation, usually influenced by an authority in a person’s life. Even through not everyone recognizes this problem; it is still an issue in many lives. With that said, my solution will potentially give relief to the world, giving everyone the chance to feel equal to one another. This solution may not make dramatic change in a short period of time, but if the students I teach, give effort to making our world an equal place, lives will change.

“The ultimate measure of a man is not where he stands in moments of comfort and convenience, but where he stands at times of challenge and controversy.” This inspiring quote came from the intelligent mind of Martin Luther King Jr., the man who took a stand for equality in the world. After his long fight against racial discrimination his life was taken for standing in the darkness of challenge and controversy. Our world may not be completely healed and safe from our history but we are learning that we are all human, no matter what race we are, or the history that trails behind us. 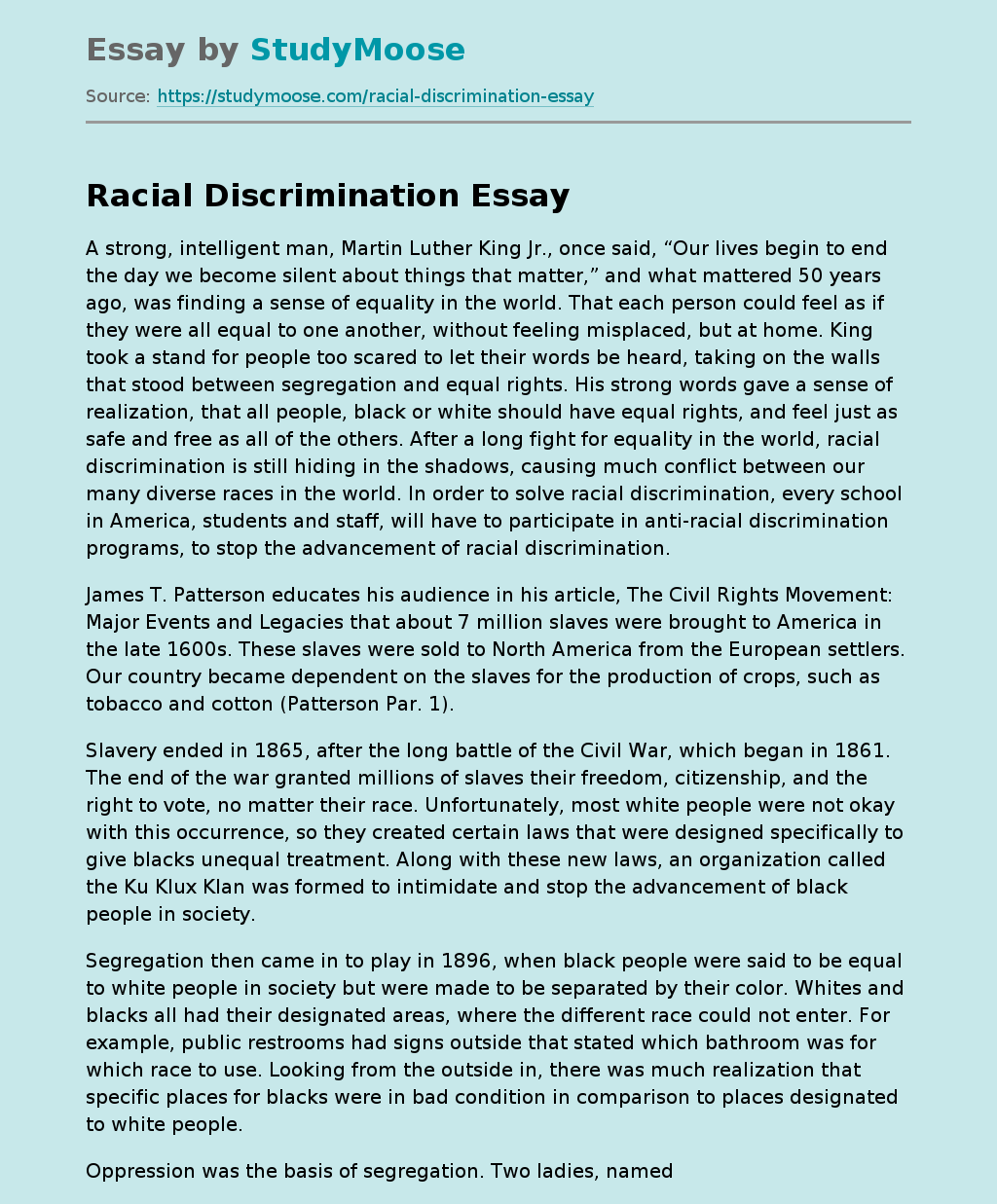