How would you like to be treated certainly because of your cultural, beliefs, tradition or even color? Well this is happening everywhere every day. This is called racial discrimination. So what is racial discrimination? It is not knowing anything about someone when you look at them, but disliking them anyway and treating them differently, not because of who they are, but what they are.

In addition Racism started from the past and is still active today. Racism in the past was simply violent especially in the early 20th Century.

Don't use plagiarized sources. Get your custom essay on
“ Racism And Discrimination Today ”
Get custom paper
NEW! smart matching with writer

When slavery was ended in America in 1865 racial tension occurred. As the free slaves, where allowed to move freely around the land a majority of the white population still saw them as slaves and did not want to interact and socialize with them.

One example of racism is that Research has shown that teachers expect black children to fail Not only are black children played in lower sets; they themselves believe that they are certain to fail.

This is proof that racism is every where and occurs from any age group.

Racism has always been around. It is one of the world’s MAJOR concerns TODAY. A number of people are naïve of how much racism undertakes in our society today. Racism can be seen in incidents of racist abuse, harassment and discrimination. Racism is the discrimination of a person because of the race that they have inherited.

Racism can be said to anyone. It is certainly severe that these things change, but these past few years, many people in all countries have been saying malicious and discourteous things about one another’s tradition.

I can’t stress to say that racism is harassment, it is Mistreatment. People think it’s amusing to torment a person because of their color, their accent, culture and sometimes even how they are not good in something, this is all racism.

There are numerous diverse types of racism, for example racism because of skin color, birth place, religion etc but they all got a couple of things in common. All kinds of racism are dreadful and create a negative and sometimes dangerous emotional response. Racism not only leads to social problems but in severe cases it causes mental illness and violence for example self harm, depression and the harming of others.

In most cases it causes the target to feel deserted, depressed and livid as most of you people previously know from experience but what you people didn’t is that in the most severe cases racism leads to suicidal thoughts and the miserable thing is that in the worst cases these thoughts are carried out and its usually by a young teenager.

That’s a young person with their whole life ahead of them claiming their life because a few people can’t accept them because they are a little different. Many riots have been caused all around the world due to racism. As John F. Kennedy had said” This nation was founded by men of many nations and backgrounds, on the principle that all men were created equal.” A statement which directly states the importance everyone has in this world and the equality everyone shares regardless where you are from or what color you are.

Racism is always going to occur but their will always be a chance to reduce it. Truth speaking there are no different races, but only one race. The human race. Thank you for listening! 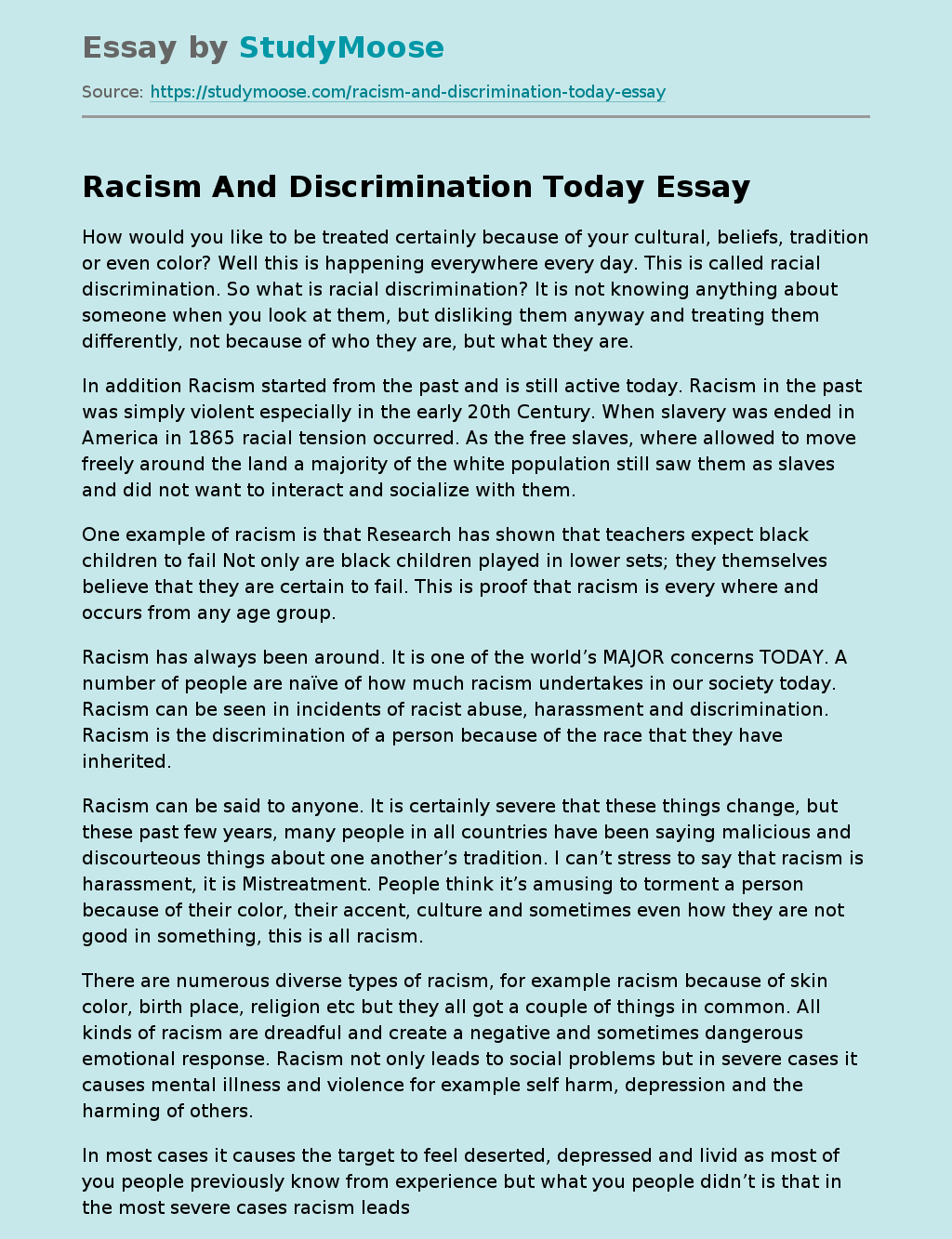