Poetry Analysis of the poem "I, Too" by Langston Hughes

The poem I, Too, written by Langston Hughes, uses excellent language, vivid imagery and strong sounds to express the poet’s feelings towards racism. I, Too is an anti-discrimination poem, which shows the injustice of racism. The poem is very effective because of its genuine emotions.

The poem is situated in America and describes a black man’s personal experience with racial discrimination. He is treated as if he is an embarrassment to the white people, and made to feel inferior to them.

Don't use plagiarized sources. Get your custom essay on
“ Poetry Analysis of the poem “I, Too” by Langston Hughes ”
Get custom paper
NEW! smart matching with writer

The poet is trying to show how America “covers up” her racial discrimination “problems.” He also wants to convey the importance of racial equality. He wants the reader to understand that this is not just a personal experience, but a voice of his people.

The man is enraged at how he is treated, but he knows he is strong enough to fight back. This is shown in the line, “But I laugh,/ and eat well,/ And grow strong.” The following stanza’s tone is of warning and caution. The man warns the people, that he will become powerful, and that no one will dare to harm him in the future. Then in the next stanza, the tone changes once again. The man is much calmer and speaks proudly that one day “they’ll see how beautiful I am/ And be ashamed.

” In the last line, the tone is once again patriotic.

The poem’s structure is irregular. The poem begins and ends with single lines. In between there are 3 stanzas, all of which have different number of lines-6, 7 and 3. The purpose for the irregular structure is to create an effect of unequalness, symbolizing the discrimination he is receiving.

The poem’s use of simple language helps to clearly define what the poet wants to express. The saying that “strong people don’t waste words,” is shown here, as the poem is short and to the point. It could also reflect the uneducated class, or the clarity and simplicity of their just complaint. The poem is also made more effective by using words with deeper meanings. For example, the word, “brother,” means family and symbolizes equality and acceptance. Another example, “sit at the table,” has its literal meaning, and also a second meaning, indicating politics and being involved in making decisions. The fact that the poem is short and simple but can express so much meaning shows how the diction of this poem adds to its effectiveness.

Likewise, the use of imagery in this poem adds to the poem’s effectiveness. The poet uses a lot of domestic images. The reader can picture the large house of a wealthy family, the kitchen- the servant’s quarters- and the dining room. The poem also contains a few metaphors and symbols. Metaphors and symbols are used because they say what we want to say, more vividly and forcefully. In the line, “I am the darker brother,” the person is comparing himself to a family member. It is clear that he is not part of his employer’s family, but here the word “brother” symbolizes equality and acceptance into a society.

An example of symbolism used in this poem is seen in the line, “They send me to eat in the kitchen when company comes.” It has two meanings. The literal meaning means the employers send him away when guests arrive. The other meaning means America trying to conceal her racial “problems” to show the world a different image of the country. Another example is “I’ll sit at the table.” The literal meaning just means to sit at a table, but it also symbolizes being in charge and making decisions. These comparisons and symbols illustrate the point so well that they increase the effectiveness of the poem.

The poem is of irregular rhythm as it is more effective this way. A steady rhythm would make the poem sound as if life was going along smoothly- not the effect the poet wanted. Instead, its irregular rhythm gives the poem a solemn feeling. This rhythm mirrors the uneasy and unsteady social relationship between blacks and whites in America.

The poem “I, Too,” is a poem about discrimination. Through the unjust actions done to the man, the reader is shown how unequal privilege and decision making power is in American society. However, also through the man’s strength and bravery, the reader can see hope in the world- hope that one day, all people will be equal. The poet’s use of great imagery and sound helped to make this poem an effective anti-discrimination poem.

Poetry Analysis of the poem "I, Too" by Langston Hughes. (2016, Jun 20). Retrieved from https://studymoose.com/poetry-analysis-of-the-poem-i-too-by-langston-hughes-essay 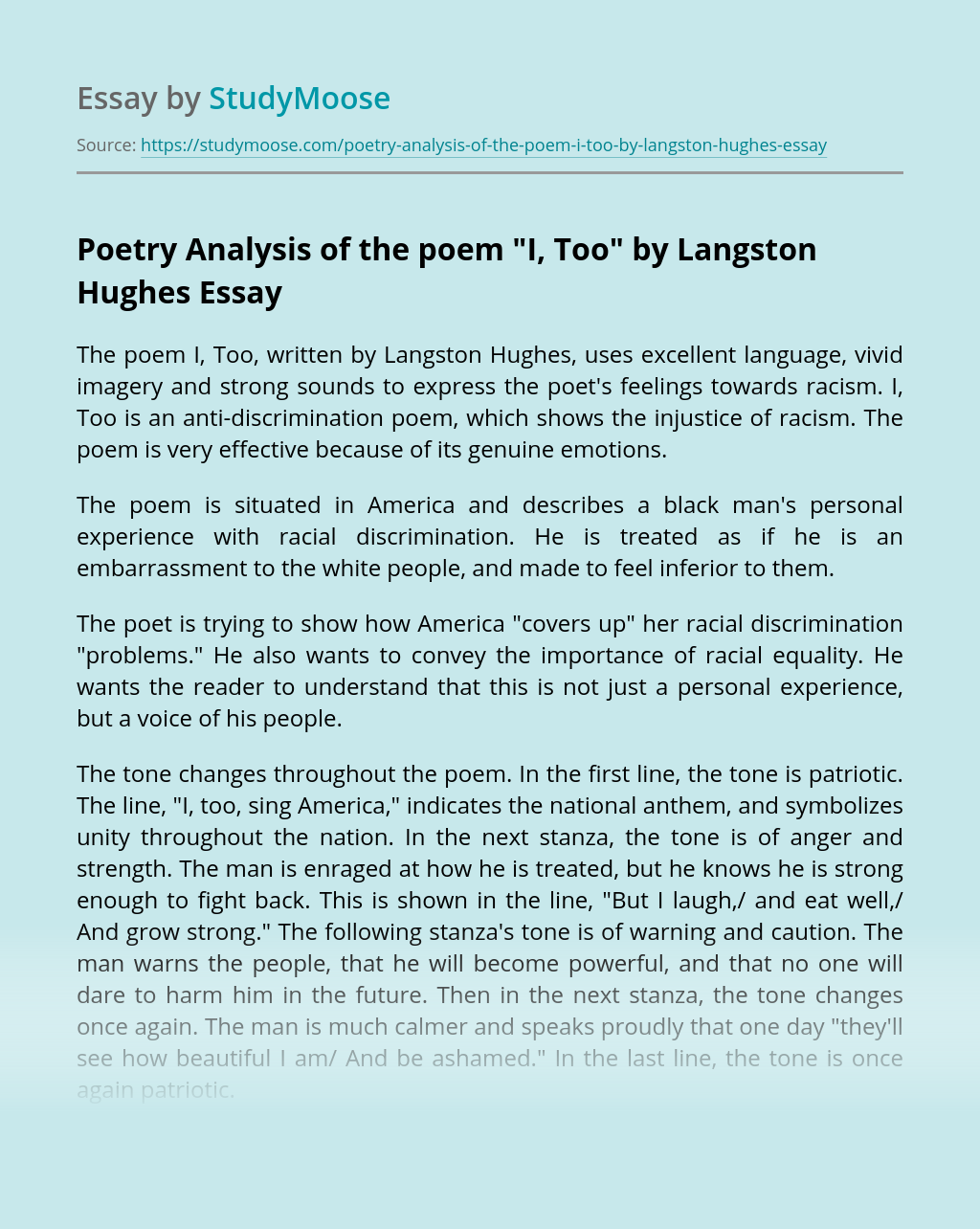