It is generally agreed that discrimination based on racial or ethnic origin is morally wrong and a violation of the principle of equality. Race refers to groups of persons who are relatively alike in their biological inheritance and are distinct from other groups. Ethnicity is a cultural phenomenon referring to a person’s identification with a particular cultural group. Racism in its most general sense can be defined as “social practices which (explicitly or implicitly) attribute merits or allocate values to members of racially categorized groups solely because of their ‘race’”.

Don't use plagiarized sources. Get your custom essay on
“ Racial Discrimination in the Criminal Justice System ”
Get custom paper
NEW! smart matching with writer

Solid evidence of discrimination exists in many stages of the criminal justice process, including the police use of deadly force and the application of the death penalty.

There are at least three aspects to racism: personal prejudice; ideological racism, where culture and biology are used to rationalize and justify the superior position of a dominant culture; and institutional racism, where the policies and practices of institutions operate to produce systematic and continuing differences between racial groups (Banks 67). To determine whether racial discrimination exists within the criminal justice system, criminologists have conducted research studies that have examined the major decision points within criminal justice systems in the United States (Banks 68).

Many report suggests that racial discrimination does occur at some points in the criminal justice system. Following the Rodney King incident, the report of the Independent Commission on the Los Angeles Police Department (also called the Christopher Commission) (1991) found that there was excessive use of force by LAPD officers and that this was compounded by racism and bias (Banks 69).

An agreement about racism exists among criminal justice administrators, policymakers, and academics. The conclusion that racial discrimination is proven to be in the justice system certainly does not follow from the research on the subject. But a majority of scholars would certainly agree that there is a substantial body of evidence proving that racial bias inheres in certain practices and policies of both the criminal justice and juvenile justice systems.

The controversy about racial discrimination in the criminal justice system remains unresolved. While most research proposes an absence of systematic racial discrimination, there is agreement among researchers that acts of discrimination does occur at specific decision-making points. Regardless of the conclusions of research studies, there is a widespread belief among minorities that the system discriminates against them and is therefore unjust (Banks 84). 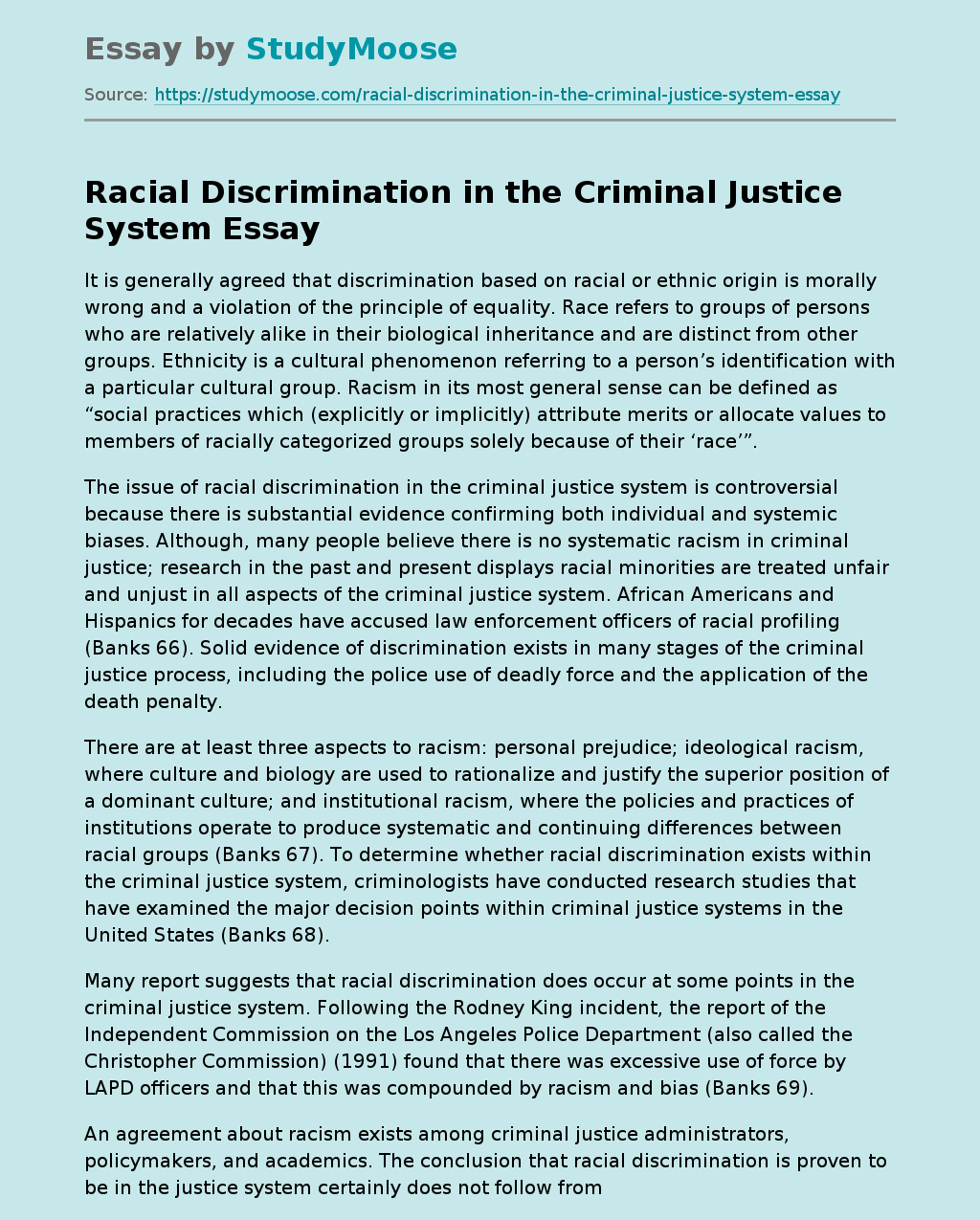