The expectations of society for the criminal justice system are to punish and rehabilitate individuals who have committed crime. Punishment and rehabilitation are two acknowledged objectives of the criminal justice system, Retribution, which is based on “an eye for an eye, a tooth for a tooth” philosophy, simply means punishment and vengeance for what evils have done. While rehabilitation, as Nicholas Tan (1999) noted that “is the idea of ‘curing’ an offender of his or her criminal tendencies, of changing their habits, their outlook and possibly even personality, so as to make them less inclined to commit crimes in the future”, the main aim of rehabilitation is to help prisoners to get some skills in prison, so that when they re-enter into society, they can adapt quickly to the new environment.

Debates over these two notions have lasted for a long time, many would argue that the main purpose of prison systems is to punish people who have committed criminals. While this should be the secondary function of prisons, the most important function should be rehabilitating criminals back to the society, not just retribution.

As a recent survey showed that over 60 percent respondents agreed that prison should reform prisoners, rather than punish them (Human Rights and Justice Studies, 2000). In this essay, it will argue that rehabilitation is a more efficient way to help prisoners rather than retribution by illustrating advantages of rehabilitation.

Some theorists throughout history have argued that the primary purpose of prisons is to punish criminals for what they have done, criminals should get punished when they break the law.

When they are sent into prisons, as punishment, they certainly do not have rights to watch TV, access to internet and so on. However, some people may disagree with this, because going into prison is already a punishment, criminals have already lost their freedom, they should not suffer extra punishment by being denied other human rights while in prison.

After all, punishment is not the ultimate goal of prisons, redemption from sin is the basic aim of prisons. The root of all crime is due to the lack of education and training, if prisons prevent offenders from receiving education or learning information from outside, then after released, they may feel alienated from society and not be accepted by society, and employers will not employ those who do not have knowledge or job skills which will deteriorate the situation of recidivism. Therefore, rehabilitation should be the main purpose of prisons, for it promotes the humanizing belief in the notion that offenders can be saved and not simply punished (Nicholas. T.,1999).

However, some people are afraid that if allow prisoners to receive education or access to internet may provide an environment to make better criminals. Whereas Dr Paul Fauteck (2006) argued that the prison education programs are not “coddling criminals”, society in general benefits from prison education programs. The basic aim of receiving education in prisons is to help them reintegrate and rehabilitate into society, so that they will not be alienated from society.

Receiving education in prisons does not necessarily suggest prisoners will commit high technological crime after they get released, in other words, the possibilities for offenders to commit high technological crime after they receive prison education are quite remote, after all, in some cases, prisoners can be educated to understand why their actions were wrong, and be allowed back into normal society with the possibility of positively effecting society (Wikia, Inc., 2007). Contrarily, if prisons do not provide educational materials, then the possibilities for recidivism will be very great because of the rejection of society.

While some dissenters controvert that rehabilitation is not efficient on helping criminals, because statistics have shown that more than half criminals got rearrested after they released about two or three years. In fact, criminal rehabilitation works to reduce recidivism, it is a cost efficient form of crime prevention (Paul. F, 2006). For example, some medicine could work to cure some offenders, and indeed, the most recent studies show that they do work. Such programs include pro-social modeling programmes, and some sex-offender treatment programs.

This research demonstrates that the net effect of treatment is, on average, a positive reduction of overall recidivism (re-offending) rates of between 10% and 12%, which would promote a reduction in crime (Nicholas.T., 1999). From this perspective, it is easy to say that rehabilitation helps to reduce the rate of recidivism, if prisons do not provide these treatments or knowledge, then nothing will ever change. Moreover, rehabilitation can also help them to realize that being in prisons are disastrous which is a good way to stop them re-entering into prisons.

To sum up, retribution theory focus more simply on punishment which is very barbaric, and it should not be encouraged in modern society. While the notion of rehabilitation is more humanism and flexible, it can help prisoners by providing education and trainings, so the true aim of prison systems should rehabilitate and reform criminals, not simply punish them. 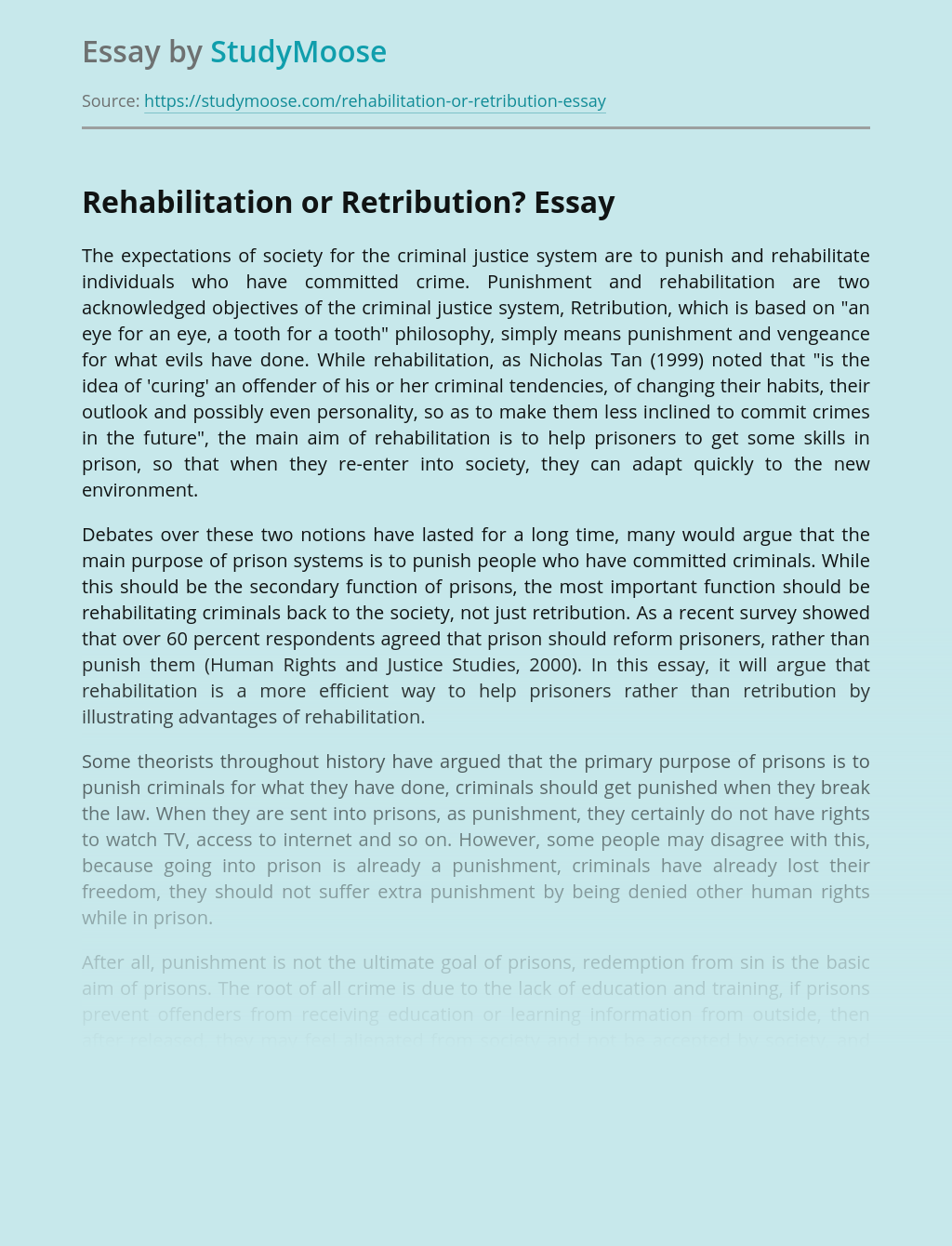 Don’t waste time
Get a verified expert to help you with Rehabilitation or Retribution
Hire verified expert
$35.80 for a 2-page paper
Stay Safe, Stay Original