Pushing Paper Can Be Fun

1.Organizational and Personal Outcomes – What performance problems is the captain trying to address?

Behavior- Officers not doing paperwork, or when done, is incomplete. Result – Cases being lost, due to poor reporting.

The officers lack motivation and perceive filling out reports as boring.

2.Goal Statement – What would be a desirable outcome?

A desirable outcome would be that officers perceive their jobs to include paperwork, and that they understand the value and importance of filling reports adequately and correctly in an assigned time frame.

Don't use plagiarized sources. Get your custom essay on
“ Pushing Paper Can Be Fun ”
Get custom paper
NEW! smart matching with writer

3.What has the Captain already tried doing to solve the problem?

To help motivate the officers, team competitions were established. These were based on the excellence of the reports. The competition provided no reward.

An idea suggested to the Captain is to include financial rewards as incentives, based on the number of conviction records. These are also related to motivational factors.

4.Using the MARS Model to diagnose the possible causes of the unacceptable behavior and to explain what the Captain should do to resolve the situation.

Motivational: The police officers are lacking motivation when it comes to doing paperwork. Their paper work is frequently put off or completed inadequately. They are aware that promotion is not based on how well they complete paperwork; rather it is based by simply staying on the force for a certain number of years.

Ability: I would assume that officers do not receive adequate training on proper report making while attending the police academy.

Also some officers may have more of an aptitude than others when it comes to writing.

Role Perceptions: The officers perceive their job as peace, law and order. They think of paperwork as boring and routine. A possible issue is that they don’t understand the value attached to providing an adequate and correct report. This perception may have been established due to improper training, the rookies are being taught by other officers, who themselves have never been formally trained. The personalities of the officers as well as their personal values play a role in how they perceive their job to be.

Situational Factors: The case did not mention any situational factors; however there is one possible factor. There isn’t enough funding for rewards, so little, that layoffs are being considered. This poses a problem in that, if officers are laid off then there is less of them to perform the task, thus making the issue worse, not improving it.

First off in order for things to improve, it needs to start with the Captain. He himself claims the work to be routine and boring; this attitude passes down to his fellow officers. Something as simple as changing his perception, would help motivate the officers.

Secondly, all officers including the Captain should be retrained. This will insure consistency throughout. Fewer cases will be lost, and establishing future incentive plans will be must easier.

Thirdly, The Captain could decrease the hours officers spend out on the streets, and allocate more time for the officers to complete their paper work.

Motivation by Punishment: If a case were to lose due to a faulty report, then the officer responsible for filling the form would have to attend a training session. To avoid the officers from falling back into the same habit, he could also punish them with a week of traffic duty. (I believe most cops prefer to be fighting crime, not issuing traffic tickets).

Motivation by Incentive: As the case study mentioned, the police station is experiencing a budget crunch. An affordable method could be to provide officers with free perks, for completing their paper work adequately, correctly and on time. Such things as: first pick of the squat car, which area/street they prefer to patrol and being able to choose cases that interest them most.

Pushing Paper Can Be Fun. (2017, Mar 05). Retrieved from https://studymoose.com/pushing-paper-can-be-fun-2-essay 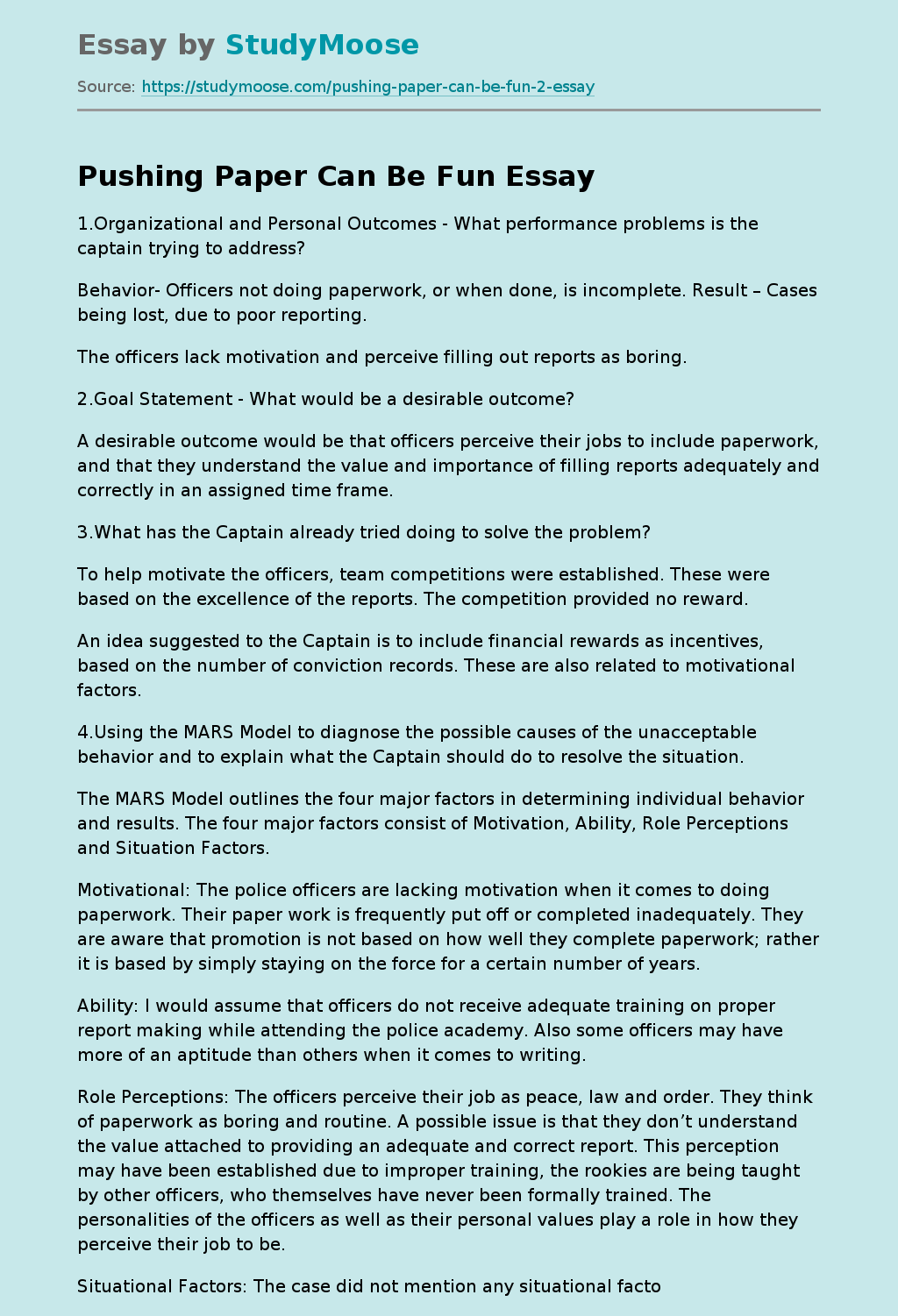