Three inmates could be released from prison today. Two of them will end up right back in the system within three years. This statistic should be enough to conclude that America’s prison systems are failing miserably with the rehabilitation of inmates. How is it plausible for every correctional facility to think isolation, segregation, and overcrowding could possibly benefit the crime rate? Instead of converting these inmates into proper citizens, the system has found ways to hold them down. To suppress their inspiration to change.

Don't use plagiarized sources. Get your custom essay on
“ Prison Reform ”
Get custom paper
NEW! smart matching with writer

For many inmates, those bars do not only imprison their bodies, but their motivation and determination as well. US prisons are breeding grounds for violence. These places are supposed to reform inmates into law abiding people. Instead, they turn even the harmless criminals into the most violent ones. One man is sentenced to one year due to drug trafficking. Another man is sentenced to life without parole for several brutal murders.

Despite the different levels of their crimes, they could possibly be bunked together in the same cell.

This right here is a prime example of what the DOC will do to hold an inmate down. By involving non-violent criminals with heinous ones, they are creating a situation of fear and defense. The man who is in for excruciating violent behavior could easily try to hurt his cell mate. He has nothing to lose. Is the man with minor charges expected to not defend himself? No. That’s where the violence sets in. When you mix completely different criminals together on purpose, there is going to be an outbreak of violence.

Everybody has those weeks where you just feel like you need to get out of the house. As if staying home doing nothing one more day would just make you rip your hair out. Imagine having to do that for anywhere up to six months or longer. Not just in a wide open house, but in a small, confined cell. No human contact, nothing to keep you busy, sometimes even going hours without food. This happens daily in the American prison systems. Solitary confinement has been a method used for years in the US.

Such isolation can take a huge toll on anybody’s mental stability. Often these inmates are thrown into a single cell, and basically forgotten about. These prisoners are treated like dogs instead of human beings. Do these officers realize that each one of those men have someone who cares about them? For every inmate in that facility there is someone who loves them. Another flaw of the DOC is the hiring process of correctional staff. I have a great deal of thanks for those who have put their safety on the line to control inmates. However, I also believe they have much to do with the violent outbreaks. For some officers, this position is like a power trip. While there are many honorable officers, you can tell they love the future of the inmates riding in their hands. I have witnessed first hand CO’s getting inmates all wired up knowing the inmate will get themselves in trouble. Often these officers act just as childish as the prisoners!

The only difference is the uniforms they’re wearing. The requirements to become a correctional officer is to provide security and to enforce the rules, not to contribute to the chaos! As a new inmate entering the system, there is one factor that everybody recognizes about you…The color of your skin. Instead of providing a place where segregation is at a minimum, prisons all across America are dealing with gang violence and race issues. These issues are known as “Prison Politics” to some. No matter who you are, or where you’re from, when entering prison you become identified by your skin tone. The level of gangs and cultural groups are so high, that often inmates have no choice but to follow the crowd. Sure, they could choose not to cooperate in the gang life, but where does that leave them? Then they will become the targets with no defense. The pressure to become accepted is so important in prison survival, that some inmates will throw away their morals just to protect themselves. Prison officials often condone the promotion of racial segregation. If one person of a specific race was found suspicious, they have the right to lock down every person of the same nationality.

They often bunk same races together to cut down the risk of altercations. This is probably for the best at the time being, but it makes you wonder why they don’t attempt to do something about gang involvement. You hear about classes on drug intervention, schooling, and religion. Why don’t they have a class on racial acceptance? I’m sure it wouldn’t convert the beliefs of many inmates, but it would at least show some effort to bring down the segregation rate. The release of an inmate should be one of the most exciting moments of their lives. It should be a time where they finally get to put all of the knowledge and inspiration they have gained to use. It should be a new stepping stone for them to create a new lifestyle without their past lagging behind them. Sadly, this is hardly ever how it works out.

In the past generation, the process of parole and release has started lacking structure. It is very rare that an inmate is individually prepared to face the real world. Instead of carefully considering ways to provide help upon release, they often just let them go on their own with no support from the inside. I understand these are grown adults, but when you are facilitated for so long, there is a need for preparation for the outside world. When these inmates are faced with the outside realities all at once, they just go back to their old ways. They are not given the support they need to make it through life on their own. These prisons confine these inmates for years, harboring their every move.

Yet when they are released, they do not help them along one bit. Something is obviously wrong here. The prison system has a long way to go before it becomes effective. More people need to start paying attention to these correctional departments. The cause seems so minuscule until someone you love becomes the victim. These prisons are inhumane, chaotic, and lacking necessary resources. Until prison systems of America reach a solid stability of rehabilitation, the inmates will continue to involve themselves in crime. These places should be for improvement, not corruption. 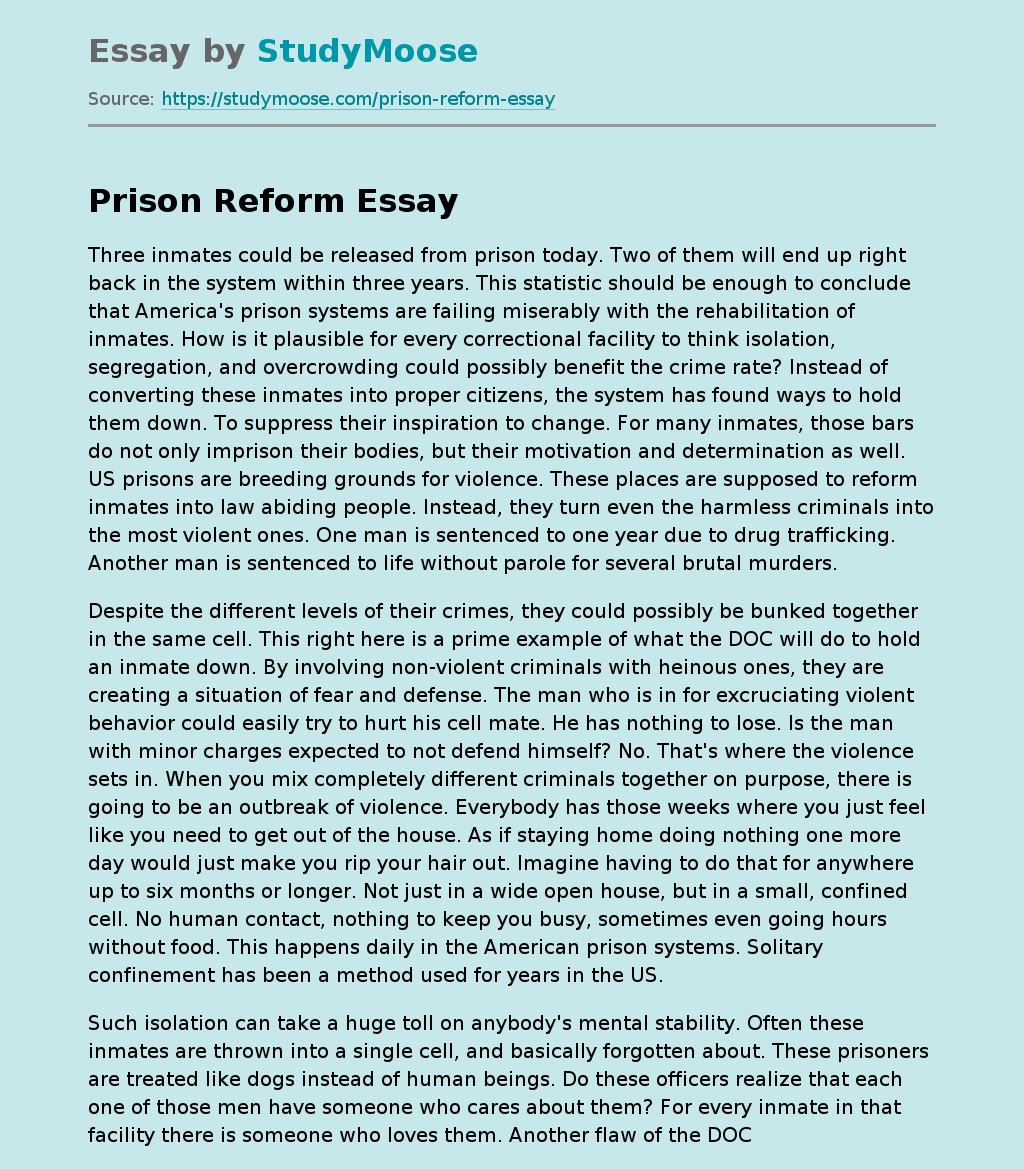