It seems impossible to define Dr. Faustus, from Christopher Marlowe’s play “Doctor Faustus,” as being anything other than tragically flawed. Faustus is not evil, foolish, or rebellious. Faustus’s flawed nature rests solely on his own prideful, overly-ambitious ways. Even so, the question still remains as to whether or not such an all-encompassing flaw should result in the damnation of one’s soul. Faustus is obviously confused as to the nature of religion, but attempting to justify Faustus’s punishment through any sphere other than religion would be improper considering the implications of the play.

Don't use plagiarized sources. Get your custom essay on
“ Dr. Faustus as a Tragically Flawed Character ”
Get custom paper
NEW! smart matching with writer

While Faustus’s punishment is obviously upheld by the Christian religion, his behavior, in a moralistic fashion, suggests that his soul is not deserving of such damnation. During the initial Prologue, the Chorus, reminiscent of earlier Greek tragedies, prepares the reader for the tragic story of Dr. Faustus, a man whose “swollen and cunning” ways lead to his inevitable downfall (Prologue. 20) . Faustus, who eventually will “mount above his reach”, is compare to Icarus from Greek mythology who flies too close to the sun and drowns (Prologue.

The Chorus tells us that this is most assuredly not a story about “pomp of proud audacious deed,” but of a man whose ineptitude leads to his eventual fall from grace (Prologue. 4-5). The Prologue serves to begin the story by focusing on Faustus, comparing him to any other tragic hero of Greek literature, and letting the reader know that even though they may sympathize with Faustus position, he is essentially damn for the beginning of the story.

Because of the inclusion of a Chorus it the play, Marlowe is reiterating the fact that Faustus should still be considered a tragic hero.

Like Achilles, Faustus has a flaw that will lead to his demise, but the damnation of Faustus would be the equivalent of damning great Greek heroes such as Achilles or Hercules. As Faustus’s character is revealed through his initial speeches in the first chapters, his flaws of pride and ambition become apparent. Faustus begins by contemplating the merits of various forms of science. He deems the study of rhetoric, medicine, and religion to all be unworthy subjects for a variety of selfish reason. Even when he decides to pursue a study of magic, he does so in hopes that magic make him “a mighty god” (1.62).

This initial decision is instrumental in much of Faustus’s character development throughout the play. Faustus considers two important alternatives, the study of medicine to help people or the study of religion to learn of God. Faustus decides that neither of these goals is personally profitable for him at that time. His shortsightedness when deciding which subject to study is in direct correlation with his other various displays of pride and selfishness. Shortly after beginning his studies of dark magic, Faustus summons Mephistopheles, one of the demons at the service of Lucifer.

Here and many other times throughout the play, Faustus displays signs of guilt and remorse, and even considers repenting of his misdeeds. Because of these various vacillations on the part of Faustus, many times throughout the play two angels, one good and one evil, appear to present arguments as to why Faustus should or should not repent. Even the early arguments that convince Faustus to enter into his pact with the devil are aimed at his ambitious pride, telling him he may one day be king of all Germany.

Later in the play, he is convinced to remain in league with the devil because of all the money and riches he could make through his powers. Faustus proves that he is unable to consider the long term ramifications to his decision. Even when his own body revolts against the pact, congealing his blood to prevent his signature, Faustus seems unaware of the negative consequences of his actions. His lack of foresight has confined his logic to considering only the short term gains associated with this pact. In another particular instance, Faustus again shows uncertainty in his convictions toward the devil.

This time, the simple arguments presented by his angelic representations are not sufficient to easy Faustus’s mind. In order to relieve his misgivings, the devil and his demons parade images of the Seven Deadly Sins before him. These sins, all representatives of tragic flaws themselves, encourage Faustus, and he delights in this parade. His enjoyment of the sinful display points to a need within Faustus to recognize tragic flaws or sin within others. He is reassured by this display because he sees a common connection with these other various sins, and is able to relate to them.

Throughout the play, he continues to build himself up by seeking dramatic flaws in other characters. During a previous discourse with Mephistopheles, Mephistopheles tells Faustus that he is constantly “tormented with ten thousand hells in being deprived of everlasting bliss,” but Faustus only seems to delight in Mephistopheles admission of weakness (3. 77-80). Instead of recognizing Mephistopheles statement as a warning toward the horrors of Hell, Faustus chastises Mephistopheles for his lack of “manly fortitude” (3. 85). Faustus’s conversation with Mephistopheles reveals his own blinded nature.

Even when presented with the raw, uncensored truth of Hell, Faustus is unable to comprehend the vital information that is being given to him. Faustus is too prideful, and here, as in the parade of sins, he reaffirms his own position by delighting in the infirmities of others. As Faustus wanders, displaying the powers that he has obtained from the devil, his inevitable demise becomes apparent. Initially, Faustus has high hopes of obtaining his lofty goals. He rides through the heavens in chariots drawn by dragons and is even able to confront the pope, but, as his time on earth begins to wane, his performances become less impressive.

He has transformed from a hero with a tragic flaw into a comic display of simplicity and waste. Everything about him is rather unimpressive. He is reduced to playing pranks on horse-coursers and performing tricks for royalty. In Vanholt, he appears to be just another rouge or clown. As a response to his own demise, Faustus comments to himself, “What are thou, Faustus, but a man condemned to die? ” (10. 24). While his flaws become more and more apparent throughout the play, the idea that Faustus deserves harsh punishment becomes more ambiguous as the play continues.

Many of his tragic qualities seem to be the direct result of his inability to comprehend the true nature of God, as presented through the Christian faith. In his initial consideration of religion, Faustus is unable to focus on forgiveness or salvation, but only sees that all men are condemned to death for their sins. He is constantly reminded by his angel companions that God’s forgiveness is available to him if he only repents, but Faustus finds himself unable to do so. He confuses Mephistopheles statement that Hell is everywhere to mean that “hell is a fable” and simple a continuation of an earthly existence.

Because of his apparent naivety toward religion, Faustus character is able to effectively question the legitimacy of his punishment, even though he has been warned of it consistently throughout the play. It is because of this ambiguity that Faustus is able to remain a sympathetic character. It is apparent from the beginning of the play that Faustus is a tragically flawed character, but, by its end, the reader must decide what becomes of a tragic character whose flaw prevents him from overcoming the need for grace and repentance in his life.

Faustus is a character overcome by the expectations of grandness in his life and a pride that he will someday meet these expectations. Because Marlowe places Faustus within the context of a struggle between the acceptance and denial of traditional Christian values, the reader is forced to judge Faustus within the circle of Christian ideology. Faustus denies grace and, through this particular ideology, deserves the punishment of being condemned to Hell, but, in a strictly moralistic fashion, in may seem to many that Faustus has previously found his Hell on earth and is undeserving of an eternal damnation. 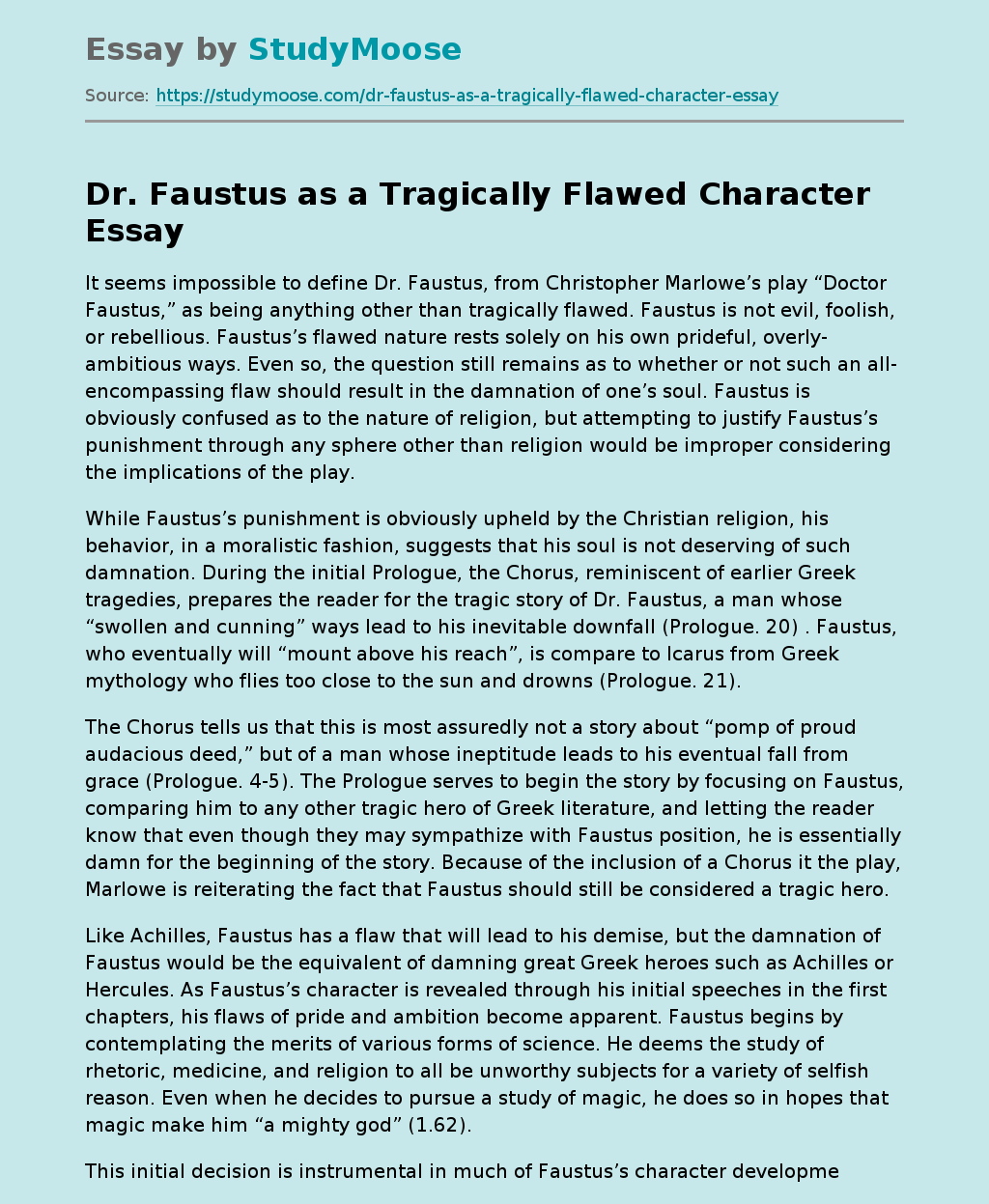