Doctor Faustus chose to be damned, although the evil spirits may have influenced him, Faustus always wanted wealth and honor. Faustus was very intelligent but with all the knowledge he had pertaining to logic, medicine, and law, it was never enough for him. With his quest for all that he could know he would never be satisfied unless he was a magician of the black arts. The damnation of Faustus’s soul was his own doing; it is exactly what he wanted.

Turn in your highest-quality paper
Get a qualified writer to help you with
“ Doctor Faustus’ Damnation ”
Get high-quality paper
NEW! AI matching with writer

Only by selling his soul too Lucifer could Faustus obtain all the he desired, having ultimate knowledge.

The beginning of the play shows Doctor Faustus is already interested with the black arts and magicians. “These metaphysics of magicians/ and necromantic books are heavenly! / Lines, circles, schemes, letters, and characters! / Ay, these are those Faustus most desires.” (lines 49-52). Faustus has an undying need for knowledge that he can only get through the means of selling his soul. Obviously Faustus had no hesitation when he has summoned Mephastophilis for the first time and demands that he be his servant for twenty-four years.

This shows that Faustus does not care what he must do to become an honored and wealthy person.

However the good angel and the evil angel appear to him and try to influence his deal with Lucifer. Faustus is having indecisive thoughts on if he has done the right thing. “Ah Christ my Savior! seek to save/ Distressed Faustus’ soul!” (line 256). The good angel is trying to tell Faustus that he can still repent and his soul will be saved, but the evil angel is reminding him that if he stays with the deal that he made, he will be wealthy and honorable.

Faustus only considers repenting for a moment and then disregards that. “O this feeds my soul!” (line 330). Through his own thoughts and free will, Doctor Faustus brought the damnation onto himself. He had the opportunity to repent more than once, but even then that wasn’t enough to make him see his fate.

Faustus was not a sympathetic figure; he was simply out to do whatever necessary for his own personal gain. Although his dearest friend The German Valdes and Cornelius, they greatly help Faustus’ journey to damnation. 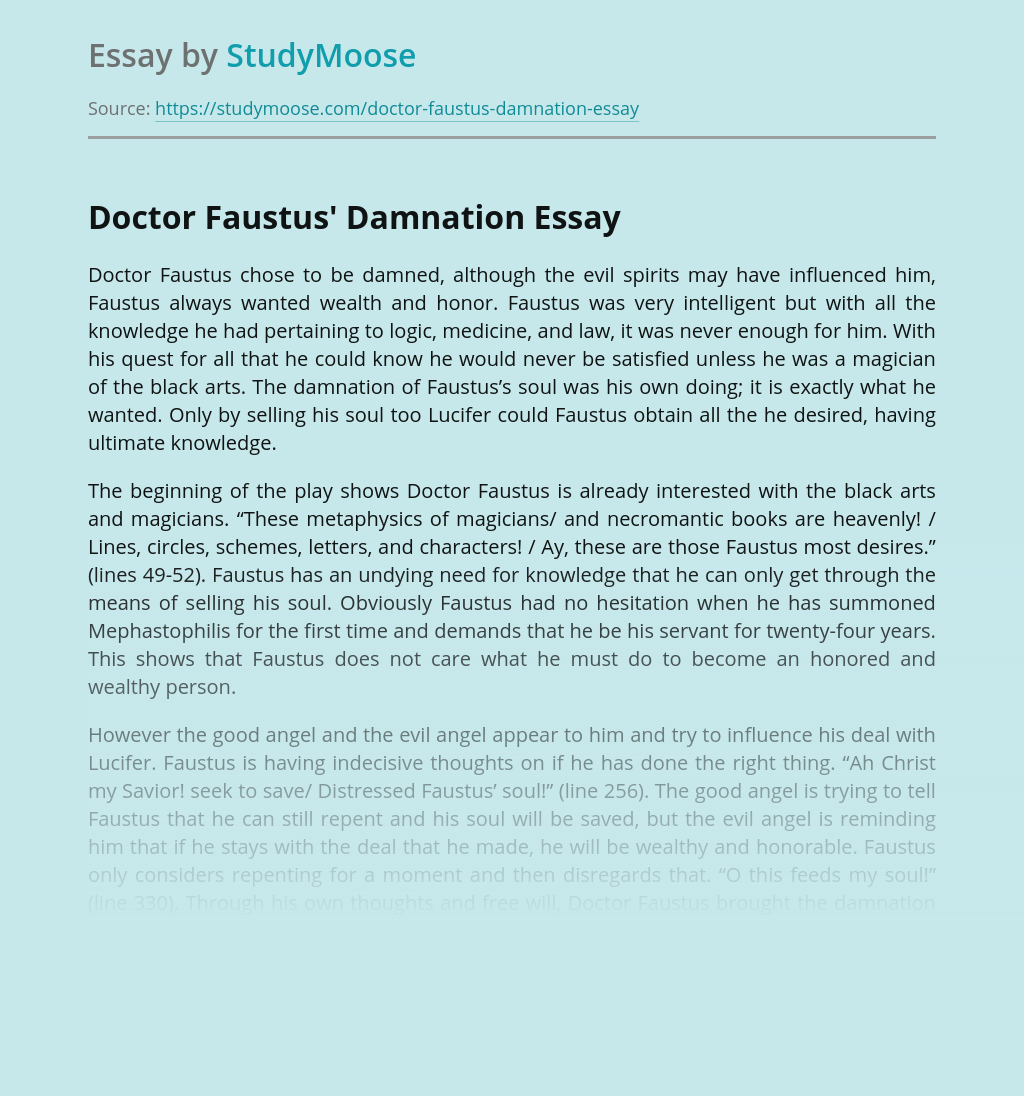 Turn in your highest-quality paper
Get a qualified writer to help you with
“ Doctor Faustus’ Damnation ”
Get high-quality paper
Helping students since 2015
Stay Safe, Stay Original