Doctor Faustus is a play about a Faustian bargain in other words a deal with the devil, where the main character Doctor Faustus makes a deal with Lucifer the prince of hell. This deal was selling his soul to Lucifer for worldly gain. Faustus wanted knowledge and power, he used his power in the form of magic and necromancy. The deal made for these powers he was going to enjoy the powers and knowledge for 24 years then he would be dammed for all eternity.

Faustus being a clever man fully uses the 24 years with no regard for abusing his powers, he gains knowledge no other mortal has and in doing so becomes almost akin to a god. Doctor Faustus is an explorative play on human nature and what drives desires, on his mission to gain knowledge and power, shows the inner motives and making of Doctor Faustus and his tragedy of individualism.

The protagonist Doctor Faustus is a well-educated scholar who is driven by his desire for knowledge and power.

This desire for knowledge was successful in the sense that Faustus gained knowledge that no other mortal should have access to but fell short in the realization that while Mephistopheles was given to Faustus to answer his questions and guide him with his new powers he was never a true servant to Faustus as he had thought. The demon was only a true servant to Lucifer and was only allowed to answer the questions that Lucifer deemed okay. The illusion of “knowledge” was on a short leash and was never to the true extent of Faustus’s desire. The second desire is for power, this power takes the form of magic and some necromancy. This power corrupts Faustus from a once wise doctor to a clown and prankster. He uses his gifts for entertainment, he performs unimportant magic tricks like conjuring. He is reduced to childish pranks like Turing himself invisible and stealing food from the pope during his dinner. The two desires of Faustus are trivial and never used for good other than self-gain and entertainment, he foolishly uses his powers and is blinded by the sheer extent of them until the final hours of his twenty-four years, and only then does he no longer question the realness of hell and only then begins to beg for repent from a god who he had strived to become. His desire for power was too blinding and turned a sharp man into a fool.

Doctor Faustus’ tragedy is not a simple one of a sinner who is too late to repent for his sins but is that of misunderstanding his circumstance and the value of freedom. Instead of relying on his own wit and cunning the easy route is provided and is not seen at the full price of the deal made. Doctor Faustus unable to realize the repercussions of the deal led to his inevitable downfall. The argument could be made that he did fully understand what the deal was and the prospect of bivalence was too great to turn down even with the risk of eternal damnation to be true.

By using symbols, foreshadowing, and description, the author shows a man torment by his quest for individualism. 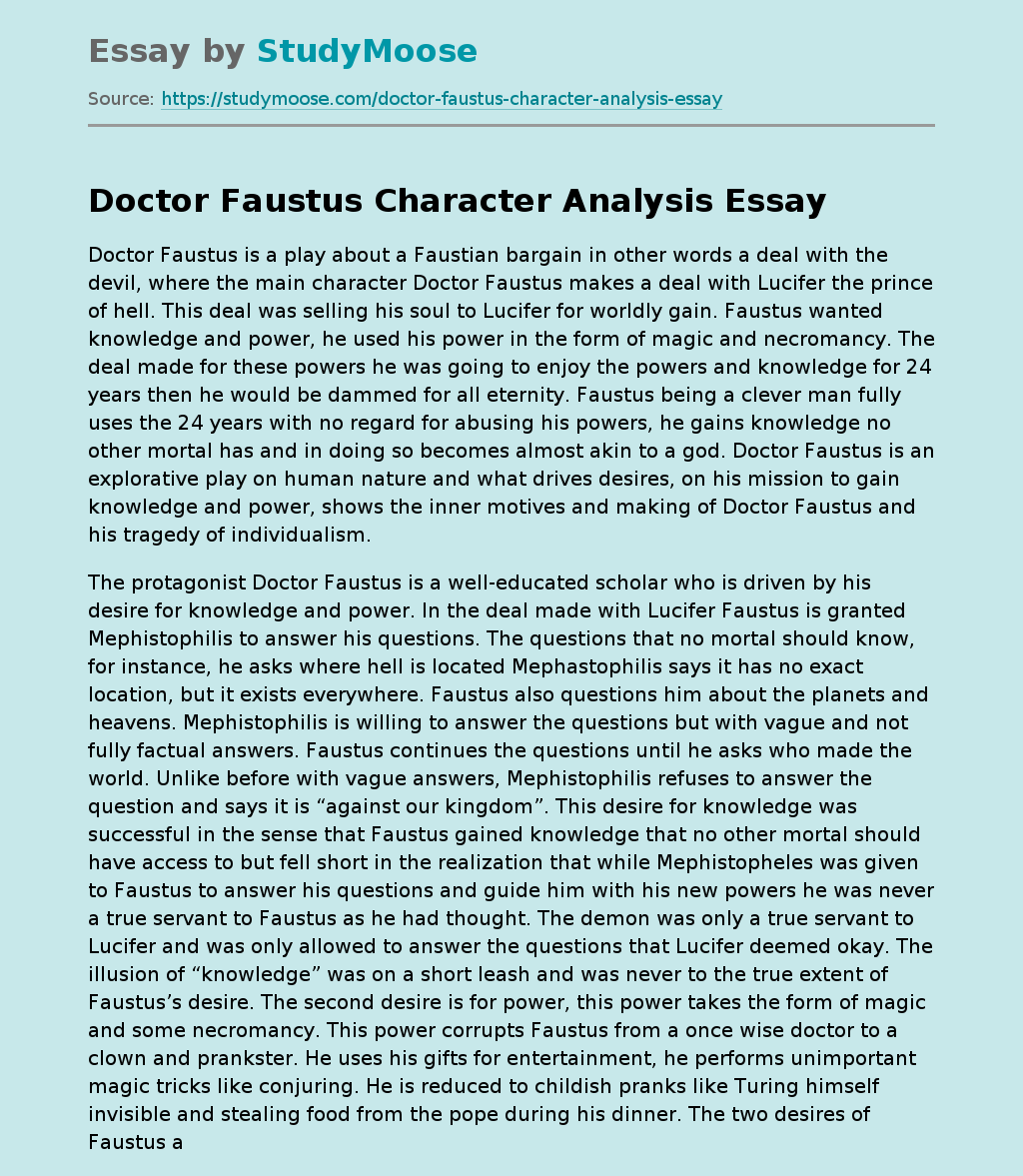