Outline On The History Of Halloween

SPECIFIC PURPOSE:At the end of my speech, my audience should understand three important points of the history of Halloween.

THESIS STATEMENT:The three most important points of Halloween can be summed up by looking at its origins, how it came to include jack-o-lanterns and bobbing for apples, and how it is celebrated today in the 21st century with trick-or-treating and haunted houses.

When the leaves start turning different colors and falling off the trees, when the temperature starts falling and the sun starts setting a little earlier each day, it makes me think of Halloween.

Don't use plagiarized sources. Get your custom essay on
“ Outline On The History Of Halloween ”
Get custom paper
NEW! smart matching with writer

Most people think all Halloween is about is dressing up and going trick or treating. It didn’t start out as a going door-to-door and getting candy event every October 31st. In fact, Halloween originated as a Celtic festival more than 2000 years ago.

When I was a kid, Halloween was my favorite time of the year. It wasn’t even because of all the candy and the dressing up, but for the overall atmosphere of it.

I have always loved all things scary and fall has always been my favorite season so naturally every year I look forward to the end of October every year.

The three most important points of Halloween can be summed up by looking at its origins, how it came to include jack-o-lanterns and bobbing for apples, and how it is celebrated today in the 21st century with trick-or-treating and haunted houses.

I.Beginning somewhere around 800 BC, The Celts celebrated “Samhain”(pronounced “sow-in”), according to the book entitled “The Celts” by Nora Chadwick.

A. Samhain is a festival to recognize the end of summer.

1. The Celtic celebrated Samhain near the end of our month of October, which was the end of the year for them.

2. It often involved a big feast because it was the end of harvest also.

B. The Celts believed that the veil between this world and the next was thinnest at this time of year.

1. Friends and relatives who had died would often return, with their souls inhabiting an animal – often a black cat.

2. Black Cats have remained a symbol of Halloween even today.

C. In celebration of the recently completed harvest, Celts would give offerings of food to the Gods.

1. They often went from door to door to collect food to donate to their deities.

2. Also, young Celts would ask the townspeople for kindling and wood, and take it to top of the hill for the Samhain bonfire.

3. These are the two possible origins of the modern “trick or treating”
ritual.

1. Sacred bonfires were lit on the tops of hills in honor of the Gods.

2. The townspeople would take an ember from the bonfire to their home and re-light the fire in their family hearth.

3. The ember would usually be carried in a holder, usually a turnip or gourd.

E. The Celts felt nervous about walking home in the dark on account of the evil spirits.

1. They dressed up in costumes and carved scary faces in their ember holders.

2. They hoped that the spirits would be frightened and not bother them.

3. This is why we carve pumpkins and children dress up for Halloween.

II. For the next eight centuries, the activities going on at the end of October began to change.

A. According to website “The Origins and History of Halloween”

1. Jack was mischievous Irishman that had tricked the Devil into climbing an apple tree.

2. He then cut a cross symbol in the tree trunk, thus trapping the
Devil in the branches.

3. At his death, he was unable to again access to Heaven because of his meanness and the Devil would not allow him into Hell because of the apple tree incident.

4. He was forced to walk the earth endlessly but the devil took pity on him and gave him a

piece of coal to light his path.

5. Jack put the coal inside a hollowed-out turnip that he had been eating.

6. This is the reason we light “jack-o-lantern” pumpkins on Halloween night.

B. Apples were considered have long been associated with female deities, and with immortality, resurrection, and knowledge.

1. One reason is that if an apple is cut through its equator, it will reveal a five-pointed star  outlined at the center of each hemisphere.

2. This was a pentagram — a Goddess symbol among the Gypsies, Celts, Egyptians,

3. Unmarried people would attempt to take a bite out of an apple bobbing in a pail of water, or suspended on a string.

4. The first person to do so was believed to be the next to marry.

5. This is where the ritual of “bobbing for apples” originated.

C. All Saints’ Day was a holiday to recognize the saints who were without their own day, and to celebrate saints that the Church had failed to recognize.

1. It originally was held on May 13, but was moved to November 1, possibly to distract Christians from celebrating Samhain.

2. Halloween was originally called All Hallows’ Eve which means the evening before All Saints’ Day.

III.Starting in the 20th century through present day, Halloween has become a major folk holiday in

A. Trick–or-Treater’s go from door to door and collect candies, apples and other treats.

1. Halloween is the holiday when the most candy is sold.

2. It is second only to Christmas in total sales of any holiday.

B. Scares and spookiness are a big part of Halloween.

1. Local community organizations put on fundraising events like haunted hayrides, scary walks through the woods, etc. to raise money for their programs.

2. Privately-owned organizations take old houses or abandoned buildings, throw in a few scary monsters here and there to create a haunted house.

1. The earliest hell house appears to have been created by Rev. Jerry Falwell in the late 1970’s, according to the “Halloween Spooking, Christian Style,” American Atheists news release, 2001-OCT-27.

2. A Hell House consists of a group of horrific presentations within a type of haunted house where a customer walks through a sequence of scenes designed to create terror and revulsion.

3. The intent is to convert the unsaved public to Christianity and to promote certain conservative Christian beliefs like the wrongs of abortion, homosexuality, and sex before marriage.

4. The last scene is different, typically a portrayal of heaven where visitors are then asked to accept salvation by repenting of their sins and accepting Jesus as Lord and Savior.

Having seen how Halloween in modern times has evolved from its humble beginnings as an end of the growing season celebration, it is interesting to see how much festivities centered around the 31st of October have changed over the last 2000 years. It has gone from an end-of-year festival around 800 BC to a time when kids go door-to-door around their neighborhoods dressed up like their favorite cartoon characters. Halloween is just a fun day for everybody. It can bring out the kid in all of us.

Outline On The History Of Halloween. (2016, Mar 09). Retrieved from http://studymoose.com/outline-on-the-history-of-halloween-essay 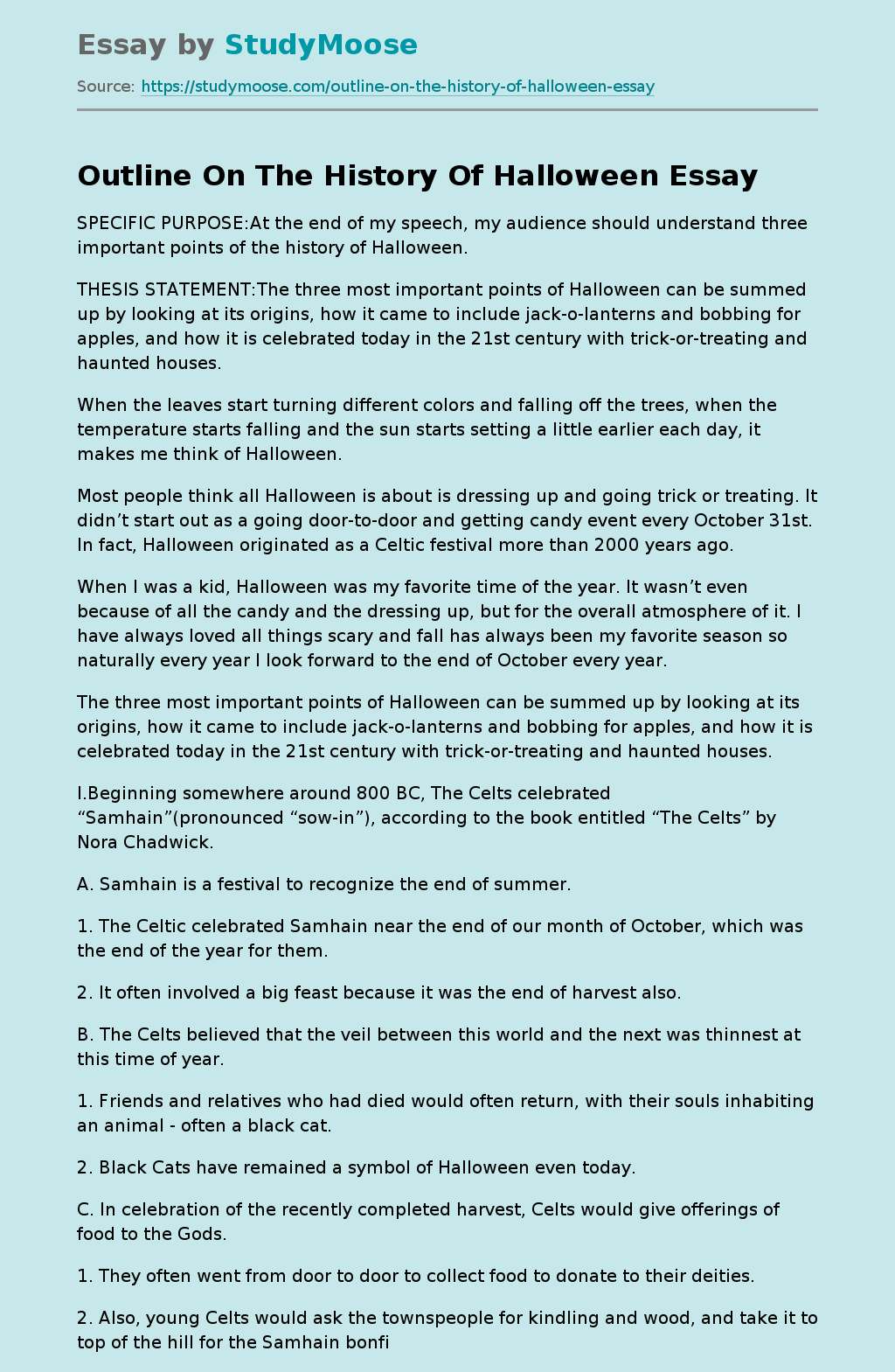