Why Do We Dress Up on Halloween?

My favorite part about Halloween is wearing costumes! It’s the one day of the year where you can really express yourself and just be happy, or so I thought. This year I decided to wear my awesome Rainbow Dash costume, hoping to spread some kind of message. However, when I walked into class, hardly anyone was wearing a costume! It felt so awkward sitting in class with a ridiculously colorful costume, with brightly colored wings while taking a math test! It just felt like an embarrassingly ordinary school day! On the other hand, there were a lot of stories on the news about people wearing inappropriate costumes ruining their career or studies.

Don't use plagiarized sources. Get your custom essay on
“ Why Do We Dress Up on Halloween? ”
Get custom paper
NEW! smart matching with writer

I was overwhelmed by the many reports I had seen on just that one day! In short, my 2018 Halloween memory ended up becoming a disappointment because of the many disturbing details I had observed throughout the day. Although dressing up for Halloween has been a tradition for many, many years, the true spirit Halloween may be on it’s last leg.

As the “times change” so do old traditions. I believe wearing costumes for Halloween should cease to continue because, in this age and time, people wear costumes that are insensitive to the many people in our nation, while business retailers use Halloween for marketing and profits.

Halloween, 2000 years ago was a festival in which the Celts believed that ghosts of the dead would return to them. So they built big bonfires and wore costumes, made of animal resources to drive away from the ghosts (Halloween 2018).

Today, costumes aren’t made of animal resources, that’s just ridiculous! The tradition that started out to drive away ghost has changed in which now we drive away the good in people. In fact, many people are wearing costumes that are racist, discriminatory, and inappropriate to today’s new American society. Likewise, Lara Prendergast in The horror of Halloween costumes, writes, “Halloween is changing. It is no longer night of uncouth revelry. It has turned into an opportunity for political posturing, a moment to show that you understand what’s acceptable and what’s not”(Pendergast). Here, Pendergast shares how society pressures are influenced into Halloween costumes to show a strong opinion. She emphasizes that Halloween traditions are evolving into something bad and I agree. Furthermore, Aaron R. Hanlon, a professor at Colby College writes his observations of the tradition on wearing costumes. He says, “ It’s likewise entirely reasonable for a black student to be angry when someone who doesn’t have to endure what she endures chooses a blackface party costume that disrespects her heritage or recapitulates the scars and wounds of her ancestral past.

At the same time, the fact that she feels angry because someone else is ignorant or insensitive in no way contravenes two demonstrable facts: One, those past scars and wounds really happened; two, the racism that inflicted them then still produces related scars and wounds of another sort today” (Student Activists Care About Issues, Not Hurt Feelings). Here, Aaron R. Hanlon describes how a person would react if they were offended by a biased costume. Since the response he gives is negative, it is a strong reflection on how other Americans would react when they feel discriminated against. Tom Kludt, a journalist on CNN Business reporters about how popular figures in American culture are supporting discriminatory costumes. One figure he mentions is Megyn Kelly a host on NBC, who made a rude comment in support of racist costumes. He quotes Kelly, “Particularly on race and ethnicity issues which, far from being healed, have been exacerbated in our politics over the past year,” Kelly said. “This is a time for more understanding, love, sensitivity, and honor, and I want to be part of that. I look forward to continuing that discussion”( Megyn Kelly apologizes for defending blackface Halloween costumes). This emphasizes the point that racism-related issues are getting worse and instead we as Americans need to shine a light on the good values of life. Megyn Kelly’s last claim brings light on how this is a topic that just can’t be ignored anymore.

It’s easy to think that wearing Halloween costumes helps express or show interest and imagination of people, especially kids, but when one looks at today’s trends, many Americans are wearing sexually inappropriate costumes on Halloween. For instance, “ people generally choose costumes that help to explore a different or alternative side of their personality” or life (Psychology: What does your Halloween costume say about you?). Halloween costumes are chosen to match people’s desires. But how far can someone’s desires go in order to cross the lines?. On Halloween, you should encounter ghosts, goblins, monsters, princesses, and heroes. However this Halloween, you would encounter mostly females wearing little to barely any clothing as a costume. Does sexy even sound like Halloween to you? For one, it’s scary! I have to admit, I always feel uneasy whenever I see someone with very little clothing on them. When I was little I wondered why people wore costumes like that instead of the Disney Princess costumes all the girls were wearing. Whenever I went costumes shopping the adult aisle was filled with mostly sexually themed costumes, making shopping very hard. Moreover, Sarah Seltzer, a journalist for The New York Times writes, “Halloween allows women to abandon all pretenses at beauty by becoming literally monstrous, or alternately to reach campy skin-bearing heights that would normally be frowned-upon (Watch Out For Exploitative Halloween Costumes). This unwanted attention puts females in danger and leaves kids with a bad image in their heads.

Even so, Americans spend thousands of dollars on buying costumes, only helping retailers and businesses earn benefits and profit at the expense of the American people. Darice Britt a writer for South University claims that “Halloween is the second-largest commercial holiday”(Halloween Is Big Business). I agree with Britt’s claim because Halloween is no longer the holiday it once was. Halloween started out as a religious holiday. However, today companies like Rubie’s, Halloween City, and Party City have a huge increase in sales and profit on Halloween. A study from the National Retail Federation (NRF) shows “ this year as $2.8 billion will be spent on costumes overall. Specifically, celebrants will shell out $1.1 billion on children’s costumes, and $1.4 billion on adult costumes. It is clear Fido and Fluffy will not be forgotten: Americans will spend $350 million on costumes for their furry friends”(Record Number of Americans to Buy Halloween Costumes). This shows how much money Americans will spend on buying Halloween. Clearly, Americans are wasting a lot of money on costumes and these startling numbers shown proves it. My family and I used to spend nearly 70 dollars to buy a costume for my sister and I. Now after looking at the NRF’s study, I might as well reuse my costume for another year.

The tradition of wearing costumes on Halloween should cease to continue because it fuels for negative emotions, hate, and discrimination, as well as being a holiday for big businesses and companies to make a profit. Instead of wearing costumes, another positive tradition should replace it. On Halloween, we should try to be kind and respectful towards others. We should not be the fire for hate but instead the candle for peace. Furthermore, news channels and broadcasters should have more reports on how some people are actually doing good things on Halloween instead of focusing reports on all the negative and bad actions by others. We should have more discussion on how to be respectful and peaceful. That way we would be one step closer to a brighter future. Like how Mahatma Gandhi once said: “An eye for an eye will only make the whole world blind”(PEACE QUOTES).

Why Do We Dress Up on Halloween?. (2020, Oct 02). Retrieved from https://studymoose.com/why-do-we-dress-up-on-halloween-essay 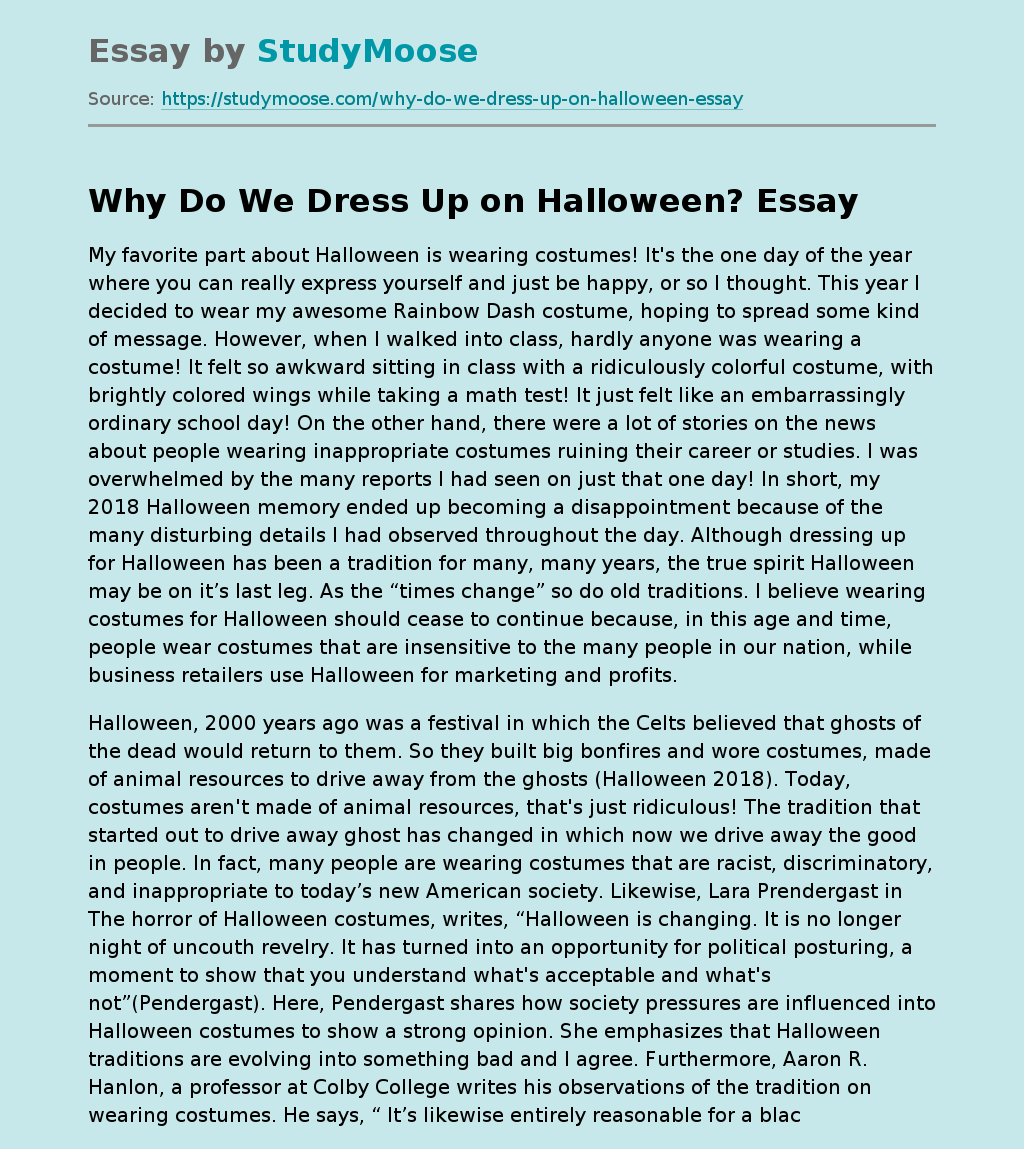