The Fascinating History of Halloween

What is Halloween? Halloween originated from the holiday Samhain (an Irish tradition), but after the Romans captured their territory, they blended traditions and created their own; similarly to when Halloween first came to the Americas and mixed with the traditions and customs of the Europeans and Indians. The activities associated with modern-day Halloween, pumpkin carving, trick or treating, bobbing for apples, and the telling of ghost stories, is not just one distinct culture, but the combining of many. Over time, the popular holiday has been adapted or evolved to have become what we celebrate today.

Don't use plagiarized sources. Get your custom essay on
“ The Fascinating History of Halloween ”
Get custom paper
NEW! smart matching with writer

Samhain, or more commonly known as Halloween, is an ancient Irish festival that helped form the roots of the now widely celebrated holiday. It is believed that the Celts saw the year as divided in two halves, a lighter half and a darker half, and that Halloween represented a time when our world and the otherworld was at its thinnest. As illustrated by Maria Marzullo, “the Celts celebrated an interesting holiday called Samhain […] which like All Saint’s Day celebrated the dead.

Samhain marked the time of the year where the veil between the realm of the living and the realm of the dead was at its thinnest meaning souls could pass through the worlds. The dead could roam the earth and the living could find themselves in the world of the dead” (Marzullo). For this reason, October 31st was referred to as Oíche Shamhna and November 1st as Lá na Marbh or Day of the Dead.

According to research, it was in the eighth century when Pope Gregory III declared November 1st All Saints Day: “the tradition originated with the ancient Celtic festival of Samhain when people would light bonfires and wear costumes to ward off ghosts.

In the eighth century, Pope Gregory III designated November 1 as a time to honor all saints. Soon, All Saints Day incorporated some of the traditions of Samhain. The evening before was known as All Hallows Eve, and later Halloween. Over time, Halloween evolved into a day of activities like trick-or-treating, carving jack-o-lanterns, festive gatherings, donning costumes and eating treats” (History Editors). It’s interesting to read how pumpkin carving and trick-or-treating were not part of the beginnings of Halloween, but rather pieces brought in by other cultures and adaptations. My family, friends, and I would get together every year and carve pumpkins, not because of the rich history, but because it is seen as a fun and creative activity. Most people today do not know the complete origins of Halloween or any of the activities they partake in during the holiday, but that doesn’t stop us from still enjoying the festivities even if they are variations or completely new traditions. Comparably, to how the Romans conquered the Celtic territory, combining two of their own festivals, with Celtic traditions.

Next, is how the Romans controlled Celtic lands for over four hundred years, and the two festivals, Feralia and Pomona became part of what would one day be Halloween: “the first was Feralia, a day in late October when the Romans traditionally commemorated the passing of the dead. The second was a day to honor Pomona, the Roman goddess of fruit and trees. The symbol of Pomona is the apple, and the incorporation of this celebration into Samhain probably explains the tradition of bobbing for apples that is practiced today on Halloween” (History Editors).

The Fascinating History of Halloween. (2020, Oct 02). Retrieved from https://studymoose.com/the-fascinating-history-of-halloween-essay 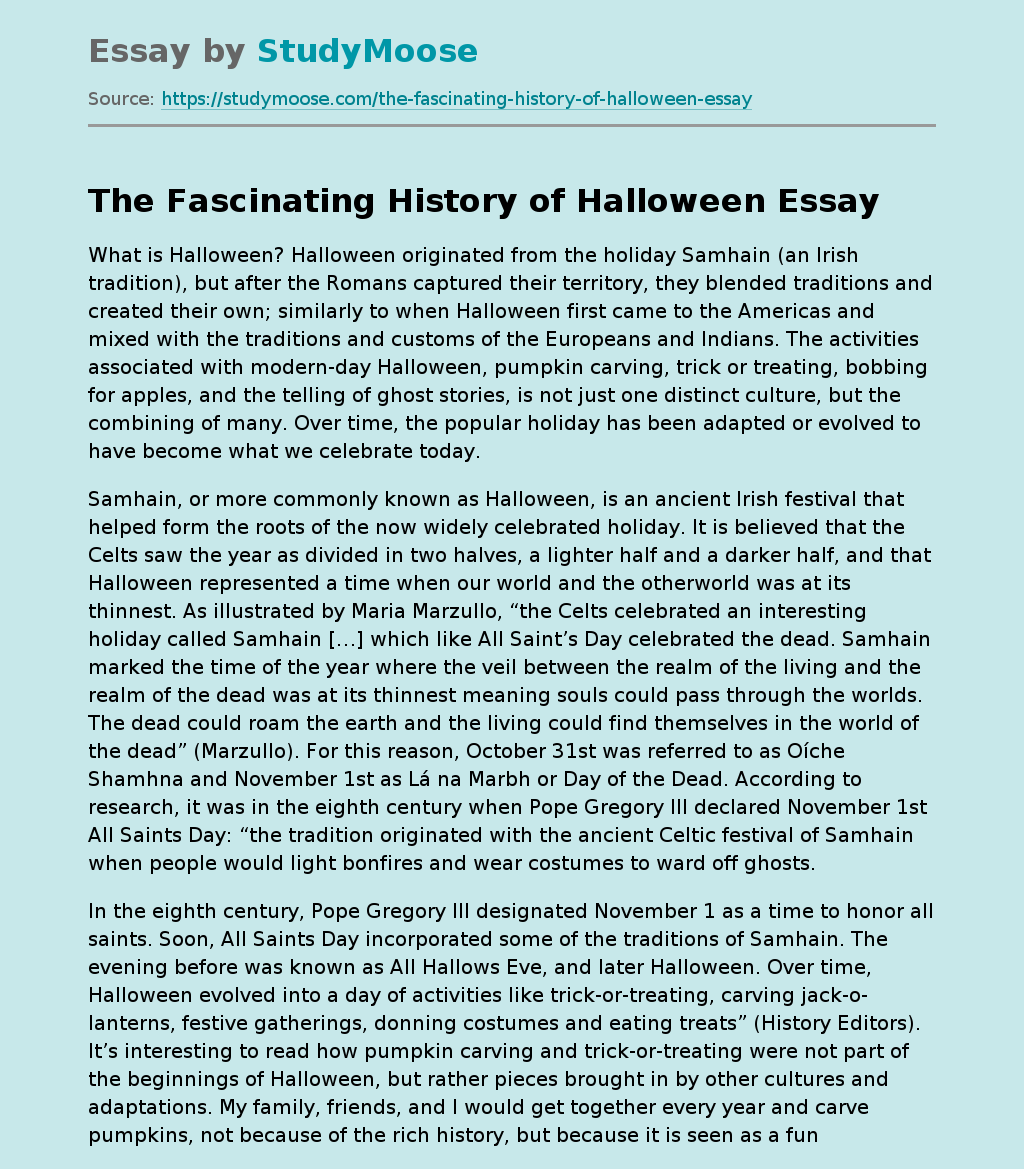