AN INTRODUCTION TO CONIC SECTIONS

There exists a certain group of curves called Conic Sections that are conceptually kin in several astonishing ways. Each member of this group has a certain shape, and can be classified appropriately: as either a circle, an ellipse, a parabola, or a hyperbola. The term “Conic Section” can be applied to any one of these curves, and the study of one curve is not essential to the study of another. However, their correlation to each other is one of the more intriguing coincidences of mathematics.

Turn in your highest-quality paper
Get a qualified writer to help you with
“ Conic Section ”
Get high-quality paper
NEW! AI matching with writer

Put simply, a conic section is a shape generated when a cone intersects with a plane.

There are four main types of conic sections: parabola, hyperbola, circle, and ellipse. The circle is sometimes categorized as a type of ellipse.

In mathematics, a conic section (or just conic) is a curve obtained as the intersection of a cone (more precisely, a right circular conical surface) with a plane. In analytic geometry, a conic may be defined as a plane algebraic curve of degree 2. There are a number of other geometric definitions possible. One of the most useful, in that it involves only the plane, is that a conic consists of those points whose distances to some point, called a focus, and some line, called a directrix, are in a fixed ratio, called the eccentricity.

Traditionally, the three types of conic section are the hyperbola, the parabola, and the ellipse. The circle is a special case of the ellipse, and is of sufficient interest in its own right that it is sometimes called the fourth type of conic section.

In mathematics, a parabola is a conic section, created from the intersection of a right circular conical surface and a plane parallel to a generating straight line of that surface. Another way to generate a parabola is to examine a point (the focus) and a line (the directrix). The locus of points in that plane that are equidistant from both the line and point is a parabola. In algebra, parabolas are frequently encountered as graphs of quadratic functions, such as

The line perpendicular to the directrix and passing through the focus (that is, the line that splits the parabola through the middle) is called the “axis of symmetry”. The point on the axis of symmetry that intersects the parabola is called the “vertex”, and it is the point where the curvature is greatest. The distance between the vertex and the focus, measured along the axis of symmetry, is the “focal length”. Parabolas can open up, down, left, right, or in some other arbitrary direction. Any parabola can be repositioned and rescaled to fit exactly on any other parabola — that is, all parabolas are similar.

Parabolas have the property that, if they are made of material that reflects light, then light which enters a parabola travelling parallel to its axis of symmetry is reflected to its focus, regardless of where on the parabola the reflection occurs. Conversely, light that originates from a point source at the focus is reflected (“collimated”) into a parallel beam, leaving the parabola parallel to the axis of symmetry. The same effects occur with sound and other forms of energy. This reflective property is the basis of many practical uses of parabolas.

The parabola has many important applications, from automobile headlight reflectors to the design of ballistic missiles. They are frequently used in physics, engineering, and many other areas.

A circle is a simple shape of Euclidean geometry that is the set of all points in a plane that are a given distance from a given point, the centre. The distance between any of the points and the centre is called the radius.

A circle is a simple closed curve which divides the plane into two regions: an interior and an exterior. In everyday use, the term “circle” may be used interchangeably to refer to either the boundary of the figure, or to the whole figure including its interior; in strict technical usage, the circle is the former and the latter is called a disk.

A circle can be defined as the curve traced out by a point that moves so that its distance from a given point is constant. A circle may also be defined as a special ellipse in which the two foci are coincident and the eccentricity is 0. Circles are conic sections attained when a right circular cone is intersected by a plane perpendicular to the axis of the cone.

In mathematics, an ellipse is a plane curve that results from the intersection of a cone by a plane in a way that produces a closed curve. Circles are special cases of ellipses, obtained when the cutting plane is orthogonal to the cone’s axis. An ellipse is also the locus of all points of the plane whose distances to two fixed points add to the same constant. Ellipses are closed curves and are the bounded case of the conic sections, the curves that result from the intersection of a circular cone and a plane that does not pass through its apex; the other two (open and unbounded) cases are parabolas and hyperbolas.

Ellipses arise from the intersection of a right circular cylinder with a plane that is not parallel to the cylinder’s main axis of symmetry. Ellipses also arise as images of a circle under parallel projection and the bounded cases of perspective projection, which are simply intersections of the projective cone with the plane of projection. It is also the simplest Lissajous figure, formed when the horizontal and vertical motions are sinusoids with the same frequency.

In mathematics a hyperbola is a type of smooth curve, lying in a plane, defined by its geometric properties or by equations for which it is the solution set. A hyperbola has two pieces, called connected components or branches, that are mirror images of each other and resemble two infinite bows. The hyperbola is one of the four kinds of conic section, formed by the intersection of a plane and a cone. The other conic sections are the parabola, the ellipse, and the circle (the circle is a special case of the ellipse). Which conic section is formed depends on the angle the plane makes with the axis of the cone, compared with the angle a straight line on the surface of the cone makes with the axis of the cone. If the angle between the plane and the axis is less than the angle between the line on the cone and the axis, or if the plane is parallel to the axis, then the plane intersects both halves of the double cone and the conic is a hyperbola.

Hyperbolas arise in practice in many ways: as the curve representing the function in the Cartesian plane, as the appearance of a circle viewed from within it, as the path followed by the shadow of the tip of a sundial, as the shape of an open orbit (as distinct from a closed elliptical orbit), such as the orbit of a spacecraft during a gravity assisted swing-by of a planet or more generally any spacecraft exceeding the escape velocity of the nearest planet, as the path of a single-apparition comet (one travelling too fast to ever return to the solar system), as the scattering trajectory of a subatomic particle (acted on by repulsive instead of attractive forces but the principle is the same), and so on. Each branch of the hyperbola consists of two arms which become straighter (lower curvature) further out from the center of the hyperbola.

Diagonally opposite arms one from each branch tend in the limit to a common line, called the asymptote of those two arms. There are therefore two asymptotes, whose intersection is at the center of symmetry of the hyperbola, which can be thought of as the mirror point about which each branch reflects to form the other branch. In the case of the curve the asymptotes are the two coordinate axes.

Hyperbolas share many of the ellipses’ analytical properties such as eccentricity, focus, and directrix. Typically the correspondence can be made with nothing more than a change of sign in some term. Many other mathematical objects have their origin in the hyperbola, such as hyperbolic paraboloids (saddle surfaces), hyperboloids (“wastebaskets”), hyperbolic geometry (Lobachevsky’s celebrated non-Euclidean geometry), hyperbolic functions (sinh, cosh, tanh, etc.), and gyrovector spaces (a geometry used in both relativity and quantum mechanics which is not Euclidean).

The paraboloid shape of Archeocyathids produces conic sections on rock faces. Conic sections are important in astronomy: the orbits of two massive objects that interact according to Newton’s law of universal gravitation are conic sections if their common center of mass is considered to be at rest. If they are bound together, they will both trace out ellipses; if they are moving apart, they will both follow parabolas or hyperbolas. See two-body problem.

In projective geometry, the conic sections in the projective plane are equivalent to each other up to projective transformations. For specific applications of each type of conic section, see the articles circle, ellipse, parabola, and hyperbola. For certain fossils in paleontology, understanding conic sections can help understand the three-dimensional shape of certain organisms. 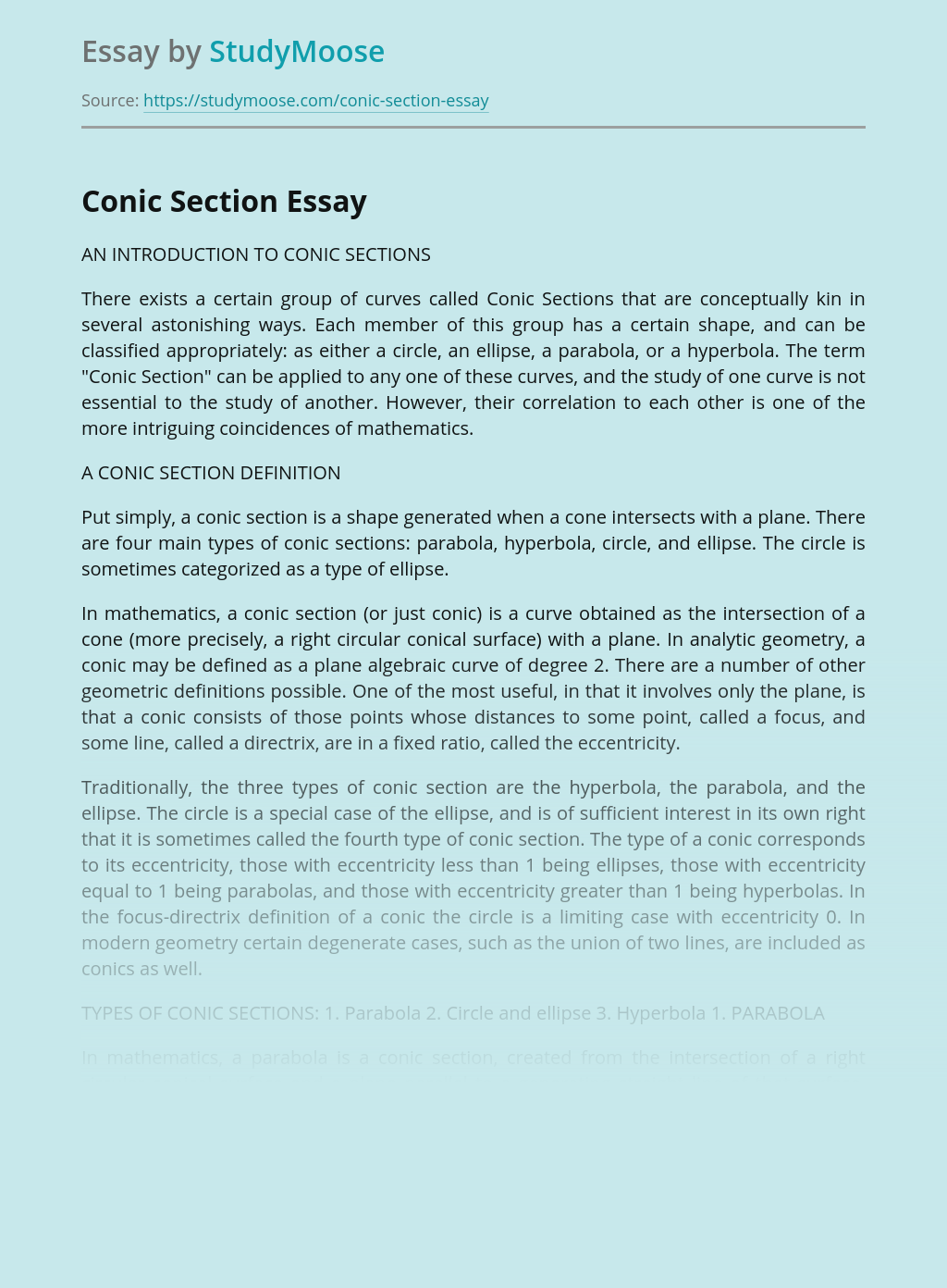 Turn in your highest-quality paper
Get a qualified writer to help you with
“ Conic Section ”
Get high-quality paper
Helping students since 2015
Stay Safe, Stay Original