He takes the puck and skates through a crowd of defensemen. He passes the centerline and releases the puck. It’s in the net! The red light is on, and it’s official. A goal is added to the scoreboard. This sport is ice hockey. Unlike rugby, a specific person did not invent ice hockey. A group of British soldiers created this sport in the mid 1850s. They were stationed in Nova Scotia where they decided to play the sport with sticks made by the Mi’kmaq people of Nova Scotia.

Don't use plagiarized sources.
Get Your Custom Essay on Hockey Speech Just from $13,9/Page

In the 1870s, students of McGill University made the rules for modern ice hockey and the very first indoor game was played in 1875. Today, I will be talking about the history of ice hockey in the NHL, why ice hockey is the best sport ever created and my favourite NHL team.

The NHL was a way for the managers to showcase their teams -the Montreal Wanderers, Montreal Canadiens, Ottawa Senators and the Toronto Arenas. The NHL was able to absorb more teams after expanding into the United States. However, in 1942, there were only 6 teams due to the Great Depression. They were known as the Original Six. Their era ended in 1967 when the NHL added more teams.They also divided the league into the Western and Eastern Conference in 1974 and by 2000, they increased to 30 teams. From 1917 to 2013, a lot has changed in the NHL. It’s surprising how a dispute can lead to the creation of one of the most prestigious leagues in the world.

Ever since I was a child, I watched ice hockey. It has something that no other sport has -teamwork. I think the NHL Playoffs best represent this. Two years ago when the Boston Bruins won the Stanley Cup, the players were committed in working together and since they stuck to this, they won the Cup. However, it wasn’t easy and this is another reason as to why I love to watch ice hockey. In my opinion, the Playoffs in the NHL are more entertaining than in basketball or baseball because it’s the hardest league to win a championship. In baseball, there’s a shorter series in the first round. In basketball, despite the similarity in format, it doesn’t have the blood spilling or bone crunching effect, which hockey has. Hockey is equivalent to a war in the playoffs until the final buzzer goes off after the fourth win in a series. All sports offer a high tempo in the postseason, however ice hockey is a bloody battle for Lord Stanley’s Cup, which lasts over two months. That’s half a season of football.

We have also seen improvements on the roster with the new face of the team, Dave Nonis, who replaced Burke earlier in January. I believe Nonis is suitable for the general manger job and with his leadership, I think the Leafs could attain, through trades or free agency, an aggressive offence, balanced defense and experienced goaltenders. These three changes are needed to bring Toronto to the playoffs and potentially add a Stanley Cup to Toronto’s thirteen wins for the trophy. Bill Bennett, an American businessman, once said, “What we find impossible, we later deem unlikely, and eventually accept as inevitable.”

Now, you have a new appreciation of ice hockey. It’s not an easy sport to play, however, it’s the greatest to watch. Since it’s beginnings in Halifax in the 1850s, it has expanded significantly to become the National Hockey League we know today. The NHL in my opinion is the hardest league to win a championship. Also, it’s an amazing league to watch ice hockey, and although I enjoy watching all the teams, I’m a huge fan of the Toronto Maple Leafs. Go Leafs Go. 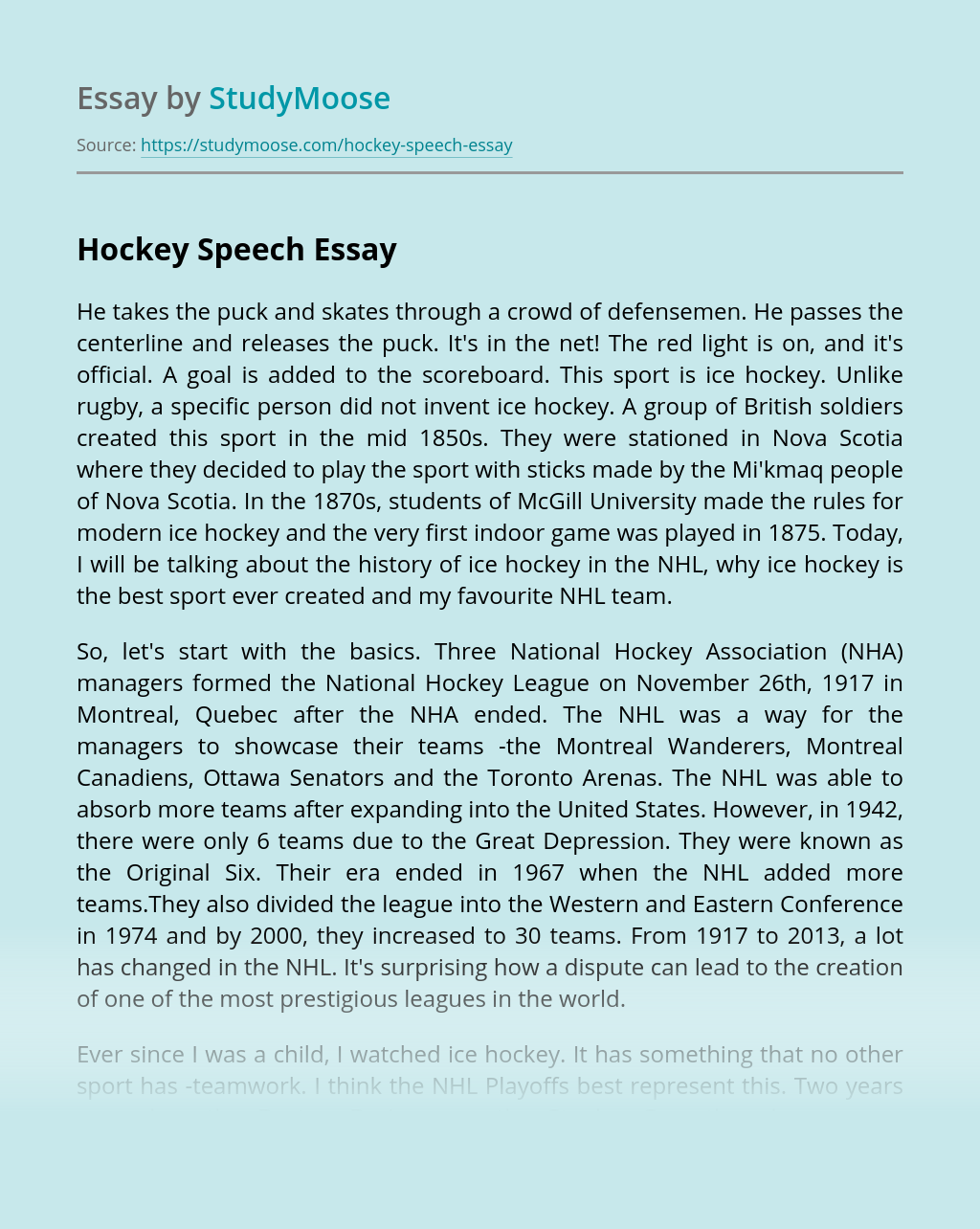 Gunslinger: Battle Between Good and Evil

The dilemma between good and evil began long before our time, and it’s been chronicled since man could write. Stephen King, one of the controversial writers of our time, brings his characters to life by giving them peculiar attributes, individual and bold attitudes, and places them in unusual predicaments. The Gunslinger series by Stephen King...

Get Essay
Component of Computer System

He takes the puck and skates through a crowd of defensemen. He passes the centerline and releases the puck. It’s in the net! The red light is on, and it’s official. A goal is added to the scoreboard. This sport is ice hockey. Unlike rugby, a specific person did not invent ice hockey. A group...

To go on a journey does not necessarily require one to physically move from one place to another. A journey can happen anywhere, and at any time, even if you are not moving. An inner journey is to transcend above the physical and temporal world into a spiritual realm. This enables one to look at...