I have a unique hobby that some people find unusual. I collect coins. Coin collecting isn’t just getting a collection of the state quarters from your grandparents, it is much more. There can be many different ways that collectors get their coins. Coin collectors can find coins that are in circulation, metal detect in places for various coins, or simply buy coins. Circulation coins are coins that show wear from the public use. Coin collecting can be considered a “different” hobby.

Don't use plagiarized sources. Get your custom essay on
“ Coin Collecting ”
Get custom paper
NEW! smart matching with writer

All my life, until I truly understood collecting coins, I thought it was weird.

I saw strange people walking in the park with a metal detector looking for coins, and I often thought, why would anyone waste their time doing something that boring? I also heard of people spending millions of dollars on one coin, which seemed outrageous to me. I could buy so many video games with that money. Finding coins in circulation and keeping them didn’t seem as weird to me, so that’s how I started my coin collection.

Proficient in: Interest And Hobbies

As I became more educated about collecting coins, I became even more interested in all the different ways to collect coins.

In coin collecting, the condition of a coin is paramount to its value; a high-quality example is often worth many times more than a poor example. Collectors have created systems to describe the overall condition of coins. In North America, the American Numismatic Association helps identify most coins. It uses 1~70 numbering scales to determine which coins are in mint, good, or poor conditions.

I had three rare coins of 1960’s back in South Korea because of busy moving schedule to USA, I left on my desk and came here. Now that I think of it, each coin where the value of $100 to $80. That value was based on 2005. Back then I had no clue of values of each coin. To be exact, nobody in my family and friend was interesting enough to collect coins. So I study the coin collecting and learn coin is worth of investing. In facts, every year coin value is increasing.

Subject collections are one way to collect great scales of coins. In subject, it could be a particular ruler’s reign or a representative coin from each ruler. And collectors may also interest in historically significant coins. For example, British royal mint of the 500th anniversary of Henry VI is one of the historically significant coin. In my collection, I’m trying to collect all countries important figures, like in the USA, George Washington, in France, Napoleon, and in Greece, Alexander the Great.

Each person has their own unique prospective to approach the coin collecting. To me, coin collecting is more or less about collecting for histories. History is very powerful. Because of this power, money, many people fought and kill each other. But now, it’s just a sad history of old days. Having a hobby is very powerful and yet some are not interested in the hobby. I recommend trying to collect coins. Who knows, you might have an expensive rare coin in your closet?

Coin Collecting. (2016, May 01). Retrieved from https://studymoose.com/coin-collecting-essay 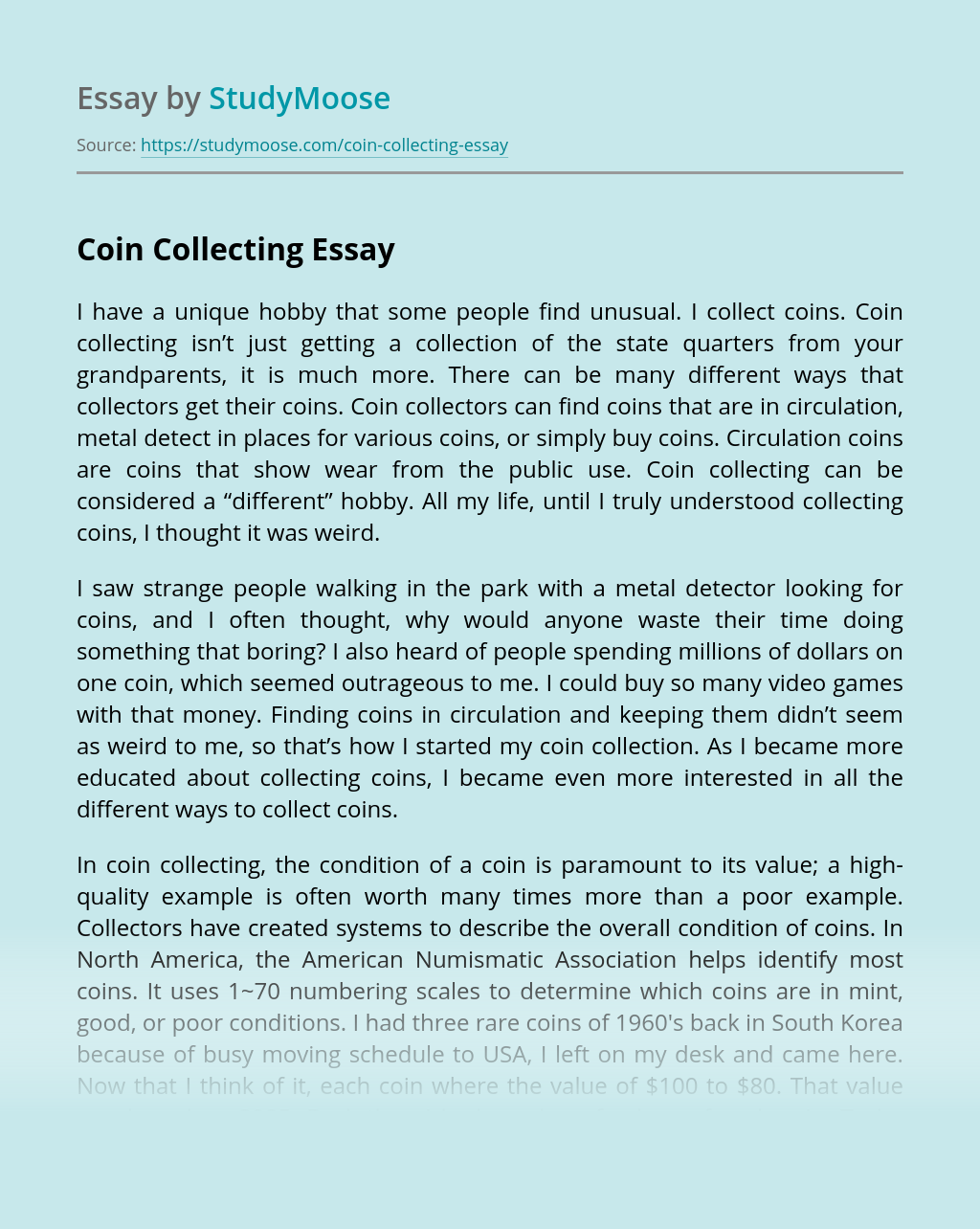