This extract seems fitting for analysis as it embodies the meaning of tragedy in the Aristotelian sense: the chief emotions induced in the audience from this 40-line exchange are pity and fear which by Aristotle’s definition announce a tragedy. The crucial event in this extract – Iago’s claims to have seen Cassio “wipe his beard” with the handkerchief – provoke a breakdown in Othello leading to his ceremonial vow to enact his revenge.

This sequence stimulates pity in the audience as they witness the “monstrous creation” Iago gleefully describes at the close of Act 1 drive Othello into a rage, shouting “blood, blood, blood”.

Don't use plagiarized sources. Get your custom essay on
“ Othello extract Analysis (3.3.435-476) ”
Get custom paper
NEW! smart matching with writer

Moreover, losing this composure which the audience had hitherto experienced in Othello evokes fear in the audience with the realisation that Othello has became the animalistic beast Iago derided him as being throughout the whole play. Thomas Rhymer’s contemptuous view on Othello is notorious as he questions “so much ado, so much stress, so much passion and repetition about an handkerchief!

Why was not this call’d the Tragedy of the Handkerchief? “.

The audience is told how the handkerchief is spotted with strawberries and this colour distribution may be likened to Othello’s promise that ‘Thy bed, lust-stained, shall with lust’s blood be spotted’ in Act Five. In this sense, the handkerchief, present at the start of their relationship as the “first gift” given to Desdemona, may symbolise the fact that the coupling of Desdemona and Othello was doomed to end in failure – indeed the inevitability of the fall from grace is a staple of Shakespearian tragedy with, for example, Macbeth’s fall prophesised before it happens by the witches.

Further, the colour of the handkerchief may also be a reference to fellow Elizabethan dramatist Thomas Kyd’s Spanish Tragedy, where, like Othello, Hieronimo takes the “handkerchief besmeared with blood” from his dead son’s body and vows to keep with him until the act of revenge is performed. Upon receiving the news about the handkerchief, Othello does two interesting things in this extract: he makes his ritualistic vow for revenge and his language adapts to accommodate his rage. Like Conrad’s tragic figure of Kurtz in Heart of Darkness, arguably Othello’s main attribute is his speech.

Indeed, where, like in many of Shakespeare’s tragedies, the audience is informed about Othello before he has appeared on stage, Iago describes Othello’s capacity for high rhetoric as he states “but he, as loving his own pride and purposes, evades them, with a bombast circumstance horribly stuffed with epithets of war. ” The audiences’ realisation of Othello’s charisma makes his claim that “rude am I in my speech and little blest with the soft phrase of peace” during the improvised trial highly ironic.

However, for the first time in the play, in this scene we experience a total loss in this charisma as he enters a state of rage making Othello’s self-critical comments at the trial proleptically fitting. For example, Othello’s cry of “damn her, lewd minx! O, damn her, damn her” is evidently inarticulate: the limited verb usage shows how his anger has limited his previously articulate diction. Further, his dismissal of Desdemona as a “lewd minx” is interesting as it echoes the bestial imagery Iago generally uses to mock Othello and so may convey the level of influence Iago now practises over Othello.

What is rather more unsettling than the explosion of Othello’s angry, incoherent outcries is the way in which he expresses his desire for revenge in this extract with the level of high rhetoric which audiences have come to expect in a calm, rational Othello. This seems to suggest that Othello vows to attain revenge while thinking clearly. T. S. Eliot famously saw Othello as self-dramatising as Othello is capable of shaping tragic experience into a story much like Brutus and Hamlet in Shakespeare’s preceding tragedies.

This feature is far more emphatically marked in Othello despite Othello’s lacking the wry self-awareness and wit of Hamlet which Iago seems to have instead inherited. Although marred slightly by his animalistic outcry of “blood, blood, blood” beforehand, Othello articulately combines classical and cosmic language seamlessly to convey the way in which his desire for revenge is so strong that its reach is infinite and timeless: from the “Hellespont” to “Heaven”.

Othello uses the simile of “icy currents” of the “Pontic Sea” to inform Iago as to the relentlessness of his convictions which will “never ebb to humble love”. The reference to teh “icy sea” along with “marble” both allude to coldness and the way in which Othello feels he must ignore his heated passions to enact his revenge. Interestingly, whilst before Iago’s language is plain and rough for example simply stating “patience, I say; your min perhaps may change”, following Othello’s explosion into rhetoric Iago follows suit and adapts his language.

For example, using cosmic language mimicking Othello, Iago calls upon the “ever-burning lights above” to witness his pledge. At this point audiences will notice the complexity of the relationship between Iago and Othello as they enter the pact together and each influence one another’s language. Iago’s adoption of Othello’s diction however is done tactically to better influence him whilst Othello seems to have subconsciously undertaken Iago’s speech patterns. In this extract, parallels may be drawn to Shakespeare’s first tragedy Titus Andronicus.

Like where Titus Andronicus plans his revenge on the Goth Queen Tamora to be like a ritual through serving her a pie made of her murdered sons, Othello’s vow for revenge in this passage is ritualistic. After having worked himself into a rage, “he kneels” and makes the “sacred vow” to achieve his revenge. The fact that Iago joins him in kneeling and makes his own vows likens this exchange to the ritual of marriage, as they both make promises to one another – there is grating irony therefore at the contrast between wedding vows and the “bloody thoughts” Othello and Iago voice.

Further, the concept of Iago and Othello entering into partnership with one another alludes to the idea that Iago is replacing the hole left by the supposed adultery of Desdemona. Alluding further to the idea of ritual is Othello’s acknowledgement that this burden of his is poisonous or “of aspics tongues. In saying this Othello is revealing that he does not want to enact revenge on Desdemona as he still loves her; however he feels bound to by tradition and pride (this is why it is necessary for him to work himself into a rage pleading “arise black vengeance from thy hollow cell”).

The reference to asps is interesting as it is different to its usage in other Shakespearian plays – here the reference is to convey the poisonousness of the burden Othello must bear whilst in Antony and Cleopatra an asp allows Cleopatra to escape from the torments of the world. This extract is suitably rich in language to denote its importance to the play. Evoking much pity and fear, the audience experience Othello willingly work himself into a state of frenzy after being falsly being informed by Iago.

Othello therefore bids a farewell to the composure and clarity of thought which afforded him his position as a tragic hero and becomes the beast Iago had cruelly derided him as being previously. Othello’s language becomes intermittently inarticulate as a result conveying the strength of emotion he experiences from his ritualistic vow for revenge. All the while Iago feigns a sense of companionship with Othello and no aside is necessary to convey to the audience the glee he is obviously experiencing at this step toward the completion of his scheme. 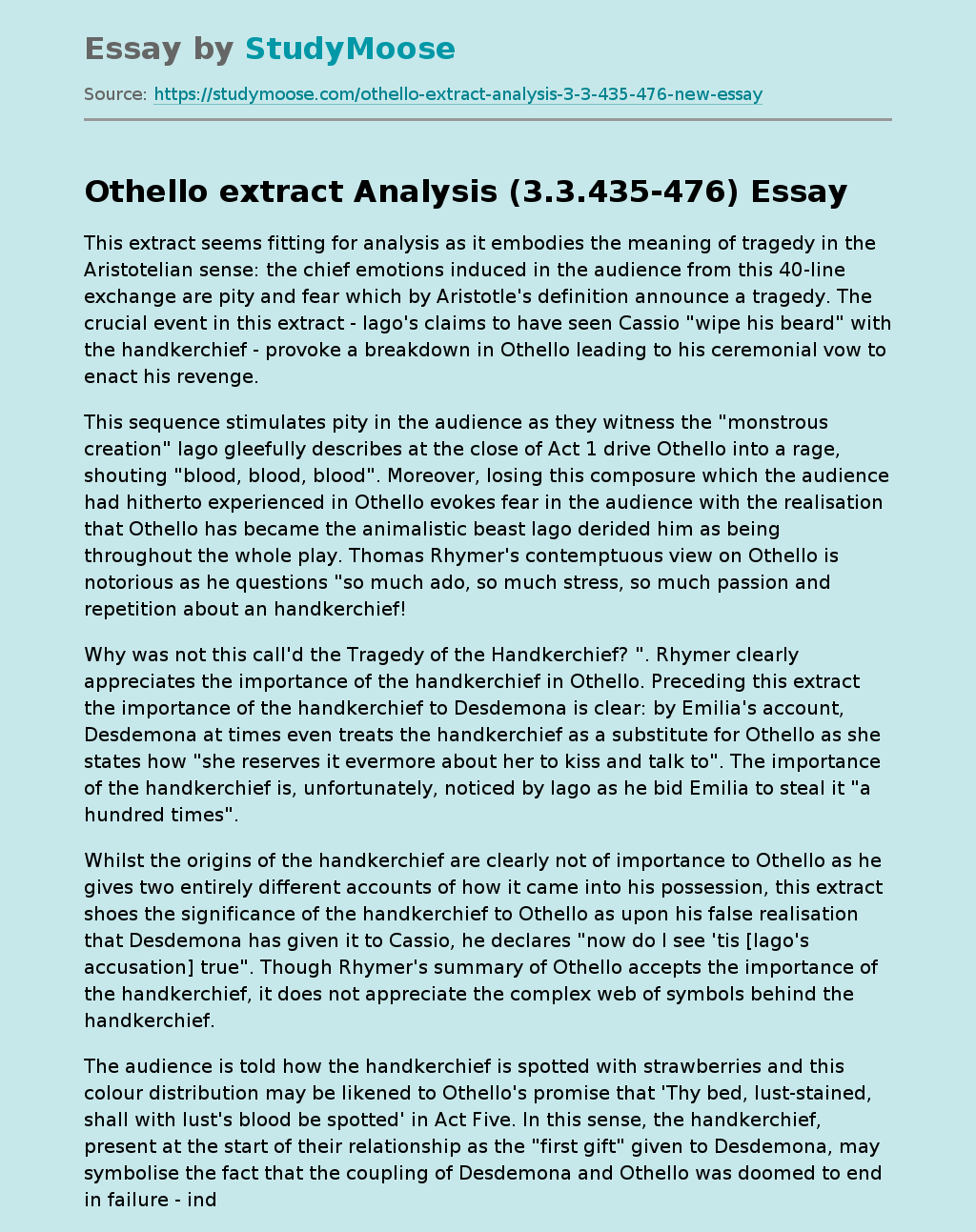