Analysis of the Significance of Othello's last speech

Don't use plagiarized sources.
Get Your Custom Essay on Analysis of the Significance of Othello’s last speech Just from $13,9/Page

Othello is a man very conscious and in some ways obsessed with reputation. He himself is aware of this, as shown in the preceding lines: “I pray you, in your letters, / When you shall these unlucky deeds relate, / Speak of me as I am”. Aware of the importance of opinion, which is inevitably affected by one’s reputation, he quickly jumps to tell people of how he would like to be remembered.

With this obsession with reputation, it is already clear that Othello has a strong motive to put a positive spin on his actions. Indeed, his preoccupation with his reputation and public image was one of the reasons that he killed Desdemona. Also, it is Iago’s reputation as an honest man which allowed him to deceive Othello without Othello once questioning his words. Thus, Othello has a strong motive not to portray himself as he really is, but how he would want us to see him and so it is already possible to see that his account of his behaviour may not necessarily be an accurate one.

The preceding lines state that he tells the others to “speak of me as I am”. However, there is great irony in this statement as he immediately goes on to misinterpret himself and his motives in order to retain his noble and righteous reputation. He says that he is “not easily jealous”. However, the notion that jealousy has the power to destroy is a significant theme of the play. His jealousy that Desdemona might love Cassio is a major part of his downfall. Despite claiming to be one not easily jealous, not only is his better judgement quickly overcome by his jealousy when Iago first begins to make the allegations, but he lets his jealousy take over and his jealousy begins to control his actions.

Also, he says that he has been “wrought, / Perplexed in the extreme”, and although it is undeniable that he has been deceived by Iago, as mentioned above, he lends himself to being “wrought” as quickly realises that Othello’s jealousy is his weakness. With Iago quickly realising very early on in the play that jealousy is Othello’s weakness, it is obvious that it is simply a mere attempt to keep his reputation intact that Othello denies that he is not easily jealous and that the opposite is true.

Othello also claims that he is one who “Drops tears as fast as the Arabian trees / Their medicinable gum” However, Othello was so consumed by jealousy and thus anger that, although he did love Desdemona, he showed little emotion immediately after killing his wife. He had already set up the murder in an execution-style killing, and was not sorry afterwards until he had found out that he was in fact wrong. Again, we see another misinterpretation by Othello in an attempt to Romanticise and justify his actions.

Othello likens his action of killing Desdemona to that of an “Indian, [throwing] a pearl away / Richer than all his tribe”. Although this is a beautiful metaphor indicative that Othello has once again returned to his mastery of language, it fails to encompass the cruel and gruesome action that Othello had just carried out. Desdemona is represented by the pearl and so once again, there is a biblical resonance, with the pearl, being perfectly spherical and white, representing Desdemona’s purity and perfection. Again, we see Othello downplaying his own actions and representing a gruesome execution with beautiful imagery. Thus, it is very difficult to see the passage as anything but an attempt by Othello to die with some honour and reputation. Despite being filled with beautiful and heroic language and imagery, the passage is ultimately contradictory and misleading and in the end, not an accurate description of the true events of the play.

This passage is especially significant in relation to the play as a whole as it is the characteristic “recognition speech” of a Shakespearean tragedy. Having finally realised, albeit too late, that he has made a mistake for which he must now live with, Othello has finally regained his natural ability with language. No longer is he bumbling along muttering lines such as “O fool, fool, fool!”, but his language is once again coherent and elegant. He has regained his composure and sets upon sentencing himself to death, through confessing and then killing himself. This action reiterates in the audience’s mind the sense of tragic loss and thus ends the tragic play.

Analysis of the Significance of Othello’s last speech. (2016, Jul 07). Retrieved from https://studymoose.com/analysis-of-the-significance-of-othellos-last-speech-essay 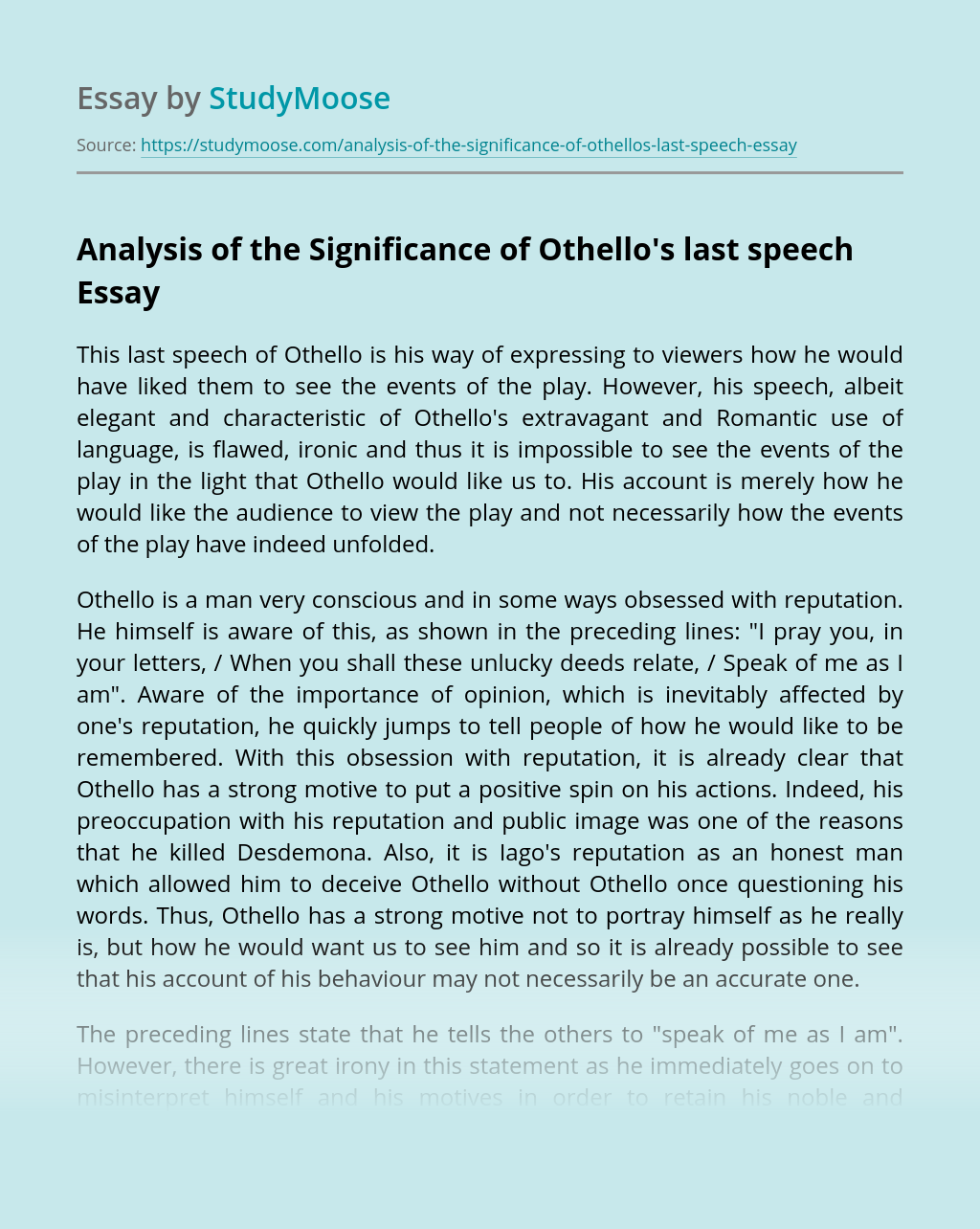 ‘Othello is among the dazzling plays written by William Shakespeare. It is the story of male named Othello and how his mind was twisted and manipulated by a male called Iago and how Iago made Othello think that his wife Desdemona was cheating on him with his lieutenant Michael Cassio, which results in many deaths....

In “Othello” and “A Doll House”, the two plays resulted in destruction of two families due to one’s jealousy and revenge. The antagonist in “Othello” is Iago who served as Othello ancient in the play was against him from the start. Iago had several motives for plotting against Othello, because they did not give him...

William Shakespeare was an English playwright and poet and widely recognized as the greatest dramatist to ever live. His plays show a great knowledge of human behavior, shown through portrayals of a wide range of characters. He had a large vocabulary, using almost 30,000 different words in his plays. His use of poetry and drama...

Use of Imagery in Oliver Parker's Othello

The symbolism with the chess pieces is very relevant to the issues of the play. It is used to symbolize Iago’s control over the main characters. Othello, Desdemona and Cassio and represented by a black king, white queen and white knight respectively. When Iago has finished his soliloquy, he drops the pieces into water. This...