An Analysis of "Othello" by William Shakespeare

In the play “Othello” by William Shakespeare Iago plays the master manipulator and manages to deceive many of the other characters especially Othello and Cassio. It can be said that his motives are based solely on his insecurities due to the fact his goal in the play was to ruin Othello’s life. He does this by using psychological manipulation on Othello’s thoughts and makes him believe that Cassio and Desdemona are fond of each other. Which basically means that he targets anyone that brings out his insecurities, which gives him a reason to lash out and kill or harm these people, to make himself feel better.

Don't use plagiarized sources. Get your custom essay on
“ An Analysis of “Othello” by William Shakespeare ”
Get custom paper
NEW! smart matching with writer

In the beginning of the play Iago makes it seem as if his hatred towards Othello is because he has made Cassio his lieutenant. As the play goes on you later realize that Iago’s hatred extends even more. “I hate the Moor, and it is thought abroad that ‘twixt my sheets, he has done my office: I know not if’t be true, but I, for mere suspicion in that kind, will do as if for surety.

Throughout the play Iago constantly reminds himself of why he’s targeting Othello.

“I do suspect the lusty Moor, Hath leap’d into my seat: the thought whereof, Doth, like a poisonous mineral, gnaw my inwards; And nothing can or shall content my soul, till I am even’d with him, wife for wife.” His hatred towards Cassio is more directed. Iago hates Cassio because he has gotten the position of lieutenant even with his lack of experience in the field as he is a more tactical creating strategies person. “More than a spinster, unless the bookish theoric”. Iago basically states that Cassio’s lack of manliness add to his hatred towards him.

Each person in the play get manipulated in a way that only suits them. For example Roderigo is “blinded by his love for Desdemona, and is prepared to do anything to win her heat” this give Iago the advantage to take his weakness and use it against him. As innocent as Iago’s words seem Othello lets Iago’s manipulative words counteract with his thinking and this is where you could say he has officially planted the seed making sure he has Othello’s ear. As Othello asks for proof Iago is once again able to manipulate Othello by making him hide and hear a conversation Iago has with Cassio. “Now will I question Cassio of Bianca, A housewife that by selling her desires, Buys herself bread and clothes. It is a creature, that dotes on Cassio, as ’tis the strumpet’s plague, To beguile many and be beguiled by one. He, when he hears of her, cannot refrain, From the excess of laughter.

Here he comes.” Iago says this once Othello withdraws and once Cassio corners him starts discussing Bianca but allows Othello to believe they are discussing Desdemona. He whispers so Othello would not hear him and by doing that he agitates Othello and that causes him to be delusional. As mentioned before Cassio is also manipulated by Iago. The first way in which Cassio is deceived is when he get pressured into drinking and then starting a fight which consequently ruins Cassio’s reputation.” If I can fasten but one cup upon him, with that which he hath drunk tonight already, He’ll be as full of quarrel and offense, as my young mistress’ dog. Now my sick fool Roderigo, Whom love hath turned almost the wrong side out, To Desdemona hath tonight caroused, Potations pottle-deep, and he’s to watch.

Three lads of Cyprus, noble swelling spirits, That hold their honors in a wary distance, The very elements of this warlike isle, Have I tonight flustered with flowing cups, And they watch too. Now ’mongst this flock of drunkards, Am I to put our Cassio in some action, That may offend the isle.” This is Iago’s soliloquy where he actually reveals his manipulative side. At first, Iago told Cassio he should drink on behalf of Othello although he knew that he did not want to and was not capable of it. Iago has manipulated Cassio to do something unethical. Othello and Cassio both get exploited by Iago because they both find honest, good friend and have a hard time judging character. Iago acts like he truly cares about Othello by giving him warning signs about Cassio. Iago also fools Cassio into thinking he cares whether he has a good time or not.

Another way Iago manipulates Cassio is when he plants the handkerchief in Cassio’s chambers. “I know not neither, I found it in my chamber. I like the work well. Ere it be demanded, As like enough it will, I would have it copied. Take it and do ’t, and leave me for this time.”. Cassio says this when he gives it to Bianca. Cassio has no idea as to how the handkerchief got into his room. Iago left it there to set him up and make it seem as if he is having an affair with Desdemona. Iago exploits Cassio’s limited knowledge since Cassio did not know that the handkerchief belong to Desdemona. In both scenarios Iago manipulates Othello and Iago by sugar coating the truth from them.

Iago does feel better after manipulating the characters in the story this is shown throughout the story as Iago manipulates and controls every other character so well that they seem like puppets that he controls. At the end of the play, Iago’s manipulation has left a trail of destruction that has killed Othello and Cassio, as well others and has destroyed the lives of many who remain. The motivations and ideas Iago has are very deceptive and cunning, and his ability to influence is very amazing. Iago’s actions define of a man who will stop at nothing until he exacts revenge on everyone who he feels has threaten him in one way or another. Shakespeare has presented Iago as a kind and noble soldier he has also been known as honest Iago, this showing that everyone is not as what they seem on the outside. Already knowing that Iago has a hatred for his superior Othello and now Cassio “Thou told’st me thou didst hold him in thy hate,” Said Roderigo. “Despise me if I do not,” Iago replies. This during the opening scenes in the play.

Iago fools Othello by providing “ocular” proof but didn’t allow him to listen or understand properly. As for Cassio, he used his friendship to plant the handkerchief. Both Othello and Cassio are naïve have a hard time judging character, are too proud to believe that someone is fooling them and their limited knowledge as to what was going on around them allows Iago to Successfully in the end manipulate the mind of Othello and sent him insane and left Cassio in a situation that he didn’t belong in. Othello and Cassio were both victims of Iago’s manipulation due to the fact that they had something Iago did not.

Jonathan, L. (28.01.2010). How does Iago manipulate different characters in order to achieve his aims? Othello. Retrieved (02.27.2014), from http://www.markedbyteachers.com/as-and-a-level/english/how-does-iago-manipulate-different-characters-in-order-to-achieve-his-aims.html

The Theme of Deception in William Shakespeare’s Othello. Retrieved (02.27.2014), from https://sites.google.com/site/thethemeofdeception/home

An Analysis of "Othello" by William Shakespeare. (2016, Mar 31). Retrieved from https://studymoose.com/an-analysis-of-othello-by-william-shakespeare-essay 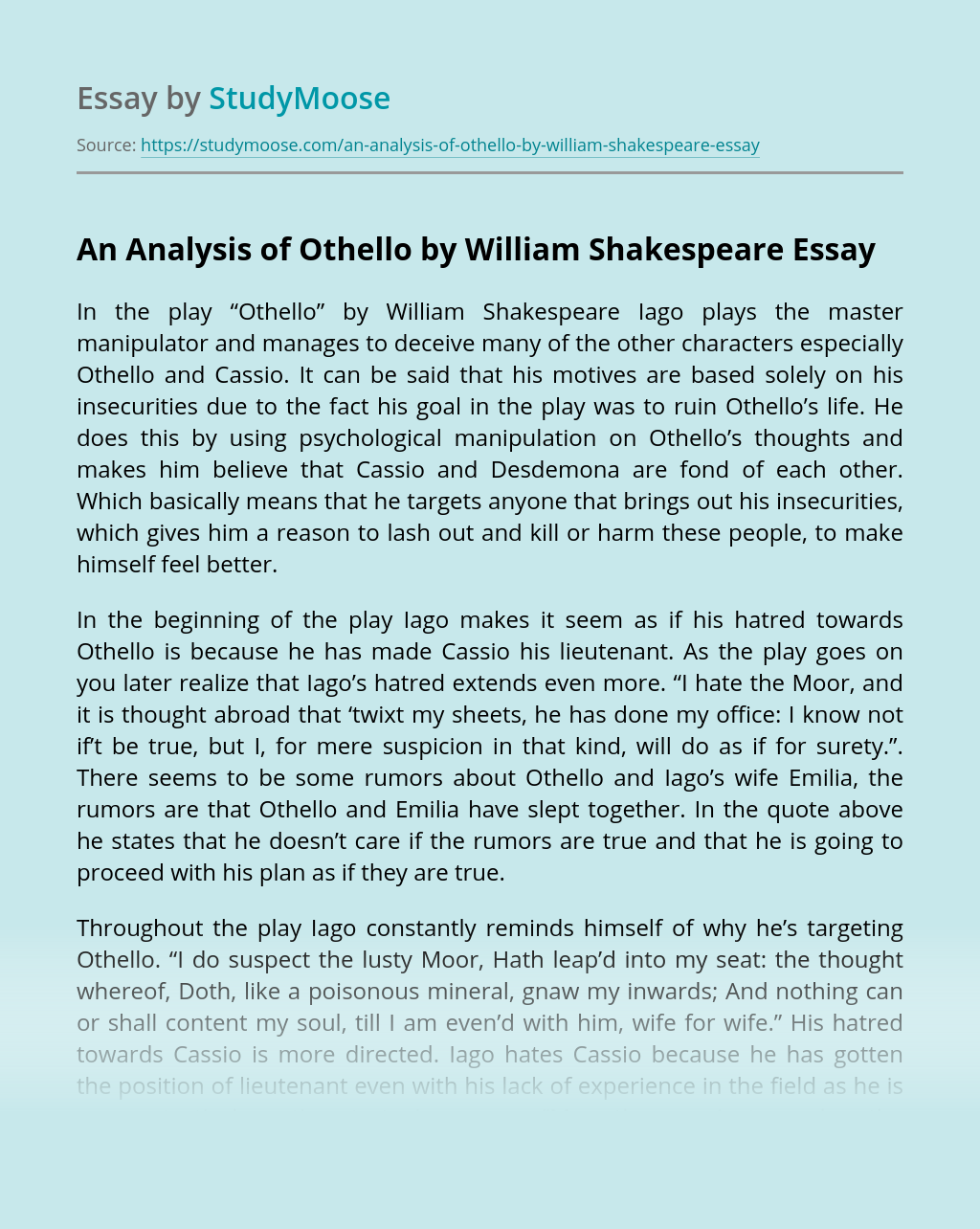