In the play Othello, our first impression suggests that Iago and Othello are portrayed as having somewhat opposite qualities.

Iago is first shown to be false and pretentious. Even though he says “I will wear my heart upon my sleeve”, giving the impression that he shows all his emotions willingly, he is then shown to be quite secretive and deceitful, plotting against Othello, Casio and Rodriguo, emphasising his ambitious nature. Furthermore we get the impression that he is spiteful and racist, building up his hatred and jealousy towards Othello, “I hate the Moor”.

Don't use plagiarized sources. Get your custom essay on
“ First impressions of Iago and Othello ”
Get custom paper
NEW! smart matching with writer

We also get the impression that Iago is manipulative. Firstly, he promises Rodriguo Desdemona in return for his aid, luring him into his grasp using one of Rodriguo’s desires, “It cannot be long that Desdemona should continue her love to the Moor – put money in thy purse”. This effectively turns Rodriguo into a tool for Iago’s deeds. Following that, he uses his trust to manipulate Othello into becoming suspicious of Desdemona, and undermining his faith in his wife.

Another one of Iago’s main features that we are presented with is that he is quite devious and cunning. He says himself: “I am not what I am”, and in his soliloquies he contemplates his cunning plans, “… to plume up my will in double knavery. How? How? Let’s see”. Despite this, Othello still refers to him as “Honest Iago”.

Othello, on the other hand, is shown to be a much more simple man, who is eloquent and much more admired.

We get the impression that he looks for a sensible, balanced explanation for things. However his simple nature acts as a catalyst to produce many of his weaknesses.

His lack of confidence in social situations causes him to become over-trusting and naïve, leading to his poor judgment. He does not suspect Iago at all, and overlooks the possibility that Iago may not be acting in Othello’s interest, referring to him as “A man …of honesty and trust”.

First impressions of Iago and Othello. (2016, Jun 24). Retrieved from https://studymoose.com/first-impressions-of-iago-and-othello-essay 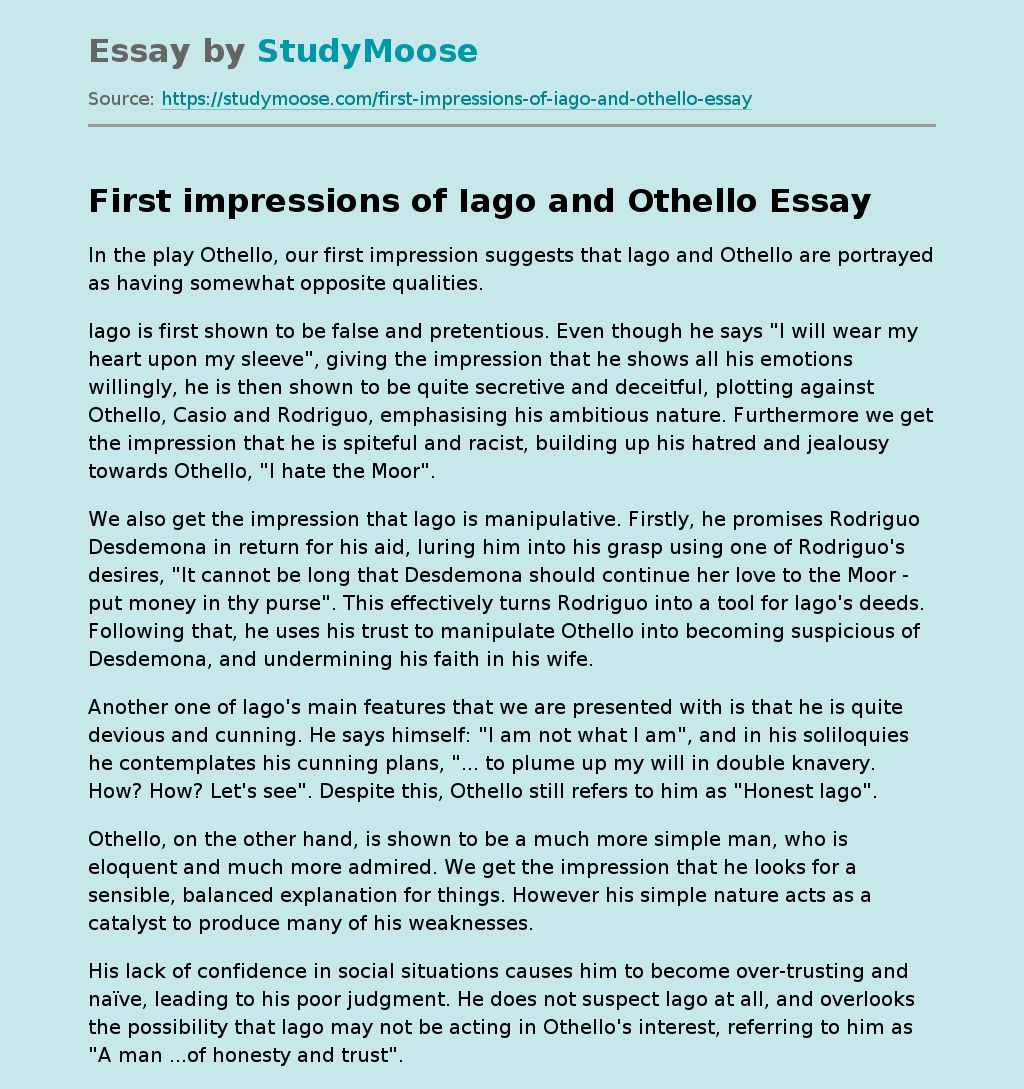