Abstract:
This project is being done to know the potency of the extract from Camellia sinensis as an ink. This project aims for making an ink for a cheaper and in alternative way than the commercial and branded one. Problem:

How to make an alternative ink out of Camellia sinensis that can be found in tea bags? Introduction:
Tea is an aromatic beverage commonly prepared by pouring hot or boiling water over cured leaves of the tea plant, Camellia sinensis. Tea likely originated in China as a medicinal drink.

Don't use plagiarized sources. Get your custom essay on
“ Thesis in tea bags ”
Get custom paper
NEW! smart matching with writer

It is made by brewing tea leaves to create an extract, due to the chlorophylls and other pigments in the leaves, the color commonly appears brown. Statement of the Problem:

In general, this project is aiming for finding out if tea bags can be used for alternative. a. Can cornstarch help the right consistency of the ink? b. Can vinegar strengthen and helps in color of the ink?
c. Do the boiling process helps taking the extract of the tea bags? Significance of the Study:

To know and learn what will be the result of making an alternative ink.

It will benefit us by producing this project. Since the manufactured inks nowadays are expensive, for this research we used the common and easy to find materials. Also, there are no harmful effects in making this; no chemical- all natural compared in commercially sold ink. Scope and Limitations of the Study:

This research and experiment are used just for alternative, it does not include the branded and machine- used ink such as printers, copiers etc.

Also, this study includes the effects of the cornstarch and vinegar in making an ink.

Conceptual Framework:
Hypothesis:
Extracts from tea bags can help making an alternative ink.
The cornstarch and vinegar will help in thickening the consistency and making the color stronger in the ink. Review of Related Studies:
Tea plants are native to East and South Asia, and probably originated around the meeting points of the lands of northeast India, north Burma and southwest China.

Tea Dyeing- a material is soaked in tea to give it an old or vintage look. The process of making India ink was known in China as far back as the middle of the 3rd millennium BC, during Neolithic China. India ink was first invented in China. The traditional Chinese method of making the ink was to grind a mixture of hide glue, carbon black, lampblack, and bone black pigment with a pestle and mortar before pouring it into a ceramic dish where it could dry. The Chinese had used India ink derived from pine soot prior to the 11th century AD and desired making ink from a source other than pine soot.

They believed that petroleum was produced inexhaustibly within the earth and so decided to make an ink from the soot of burning petroleum. The India ink has been in use in India since at least the 4th century BC, where it was called masi, and mixture of several substances. In India, the carbon black from which India ink is formulated was obtained indigenously by burning bones, tar, pitch and other substances using sharp pointed needle.

In India, a binding agent such as gelatin or, more commonly, shellac may be added to make the ink more durable once dried Indian ink is also used in medical research and is considered as a suitable material for demonstration of the blood vessels under the microscope. Methodology:

Procedure:
First, we placed the teabags in 1 ½ cups of boiling water. 2nd, we created the tea for 6-8 minutes. 3rd, we removed the teabags from the boiling water. Using a strainer and fork we removed all of the extracts. While stirring the tea, we added a tablespoon of vinegar. Then, we continued to stir it, we added as much dissolved cornstarch as we needed to have our desired consistency. And finally, we removed it from heat and let it cool. When it was already done, we stored it in a bottle.

Data Gathering Procedure:
We gathered data by using different references on the internet and books which are related on making an alternative ink from tea bags and we also used our senses to observe the ink while doing the steps. The physical characteristics of the Ink from tea extracts was observed and compared to the Ink that was commercially processed.

Findings:
During the procedure itself, we have observed that boiling was an effective process of extraction. Right after we put the tea bags inside the boiling water, the changed- color was very noticeable. During that step, the smell from the tea was strong. While doing the steps, there was a change of color when we added the vinegar and the cornstarch. The vinegar’s effect was also seen when we tried it on a paper. It became sticky and the color grew darker than before.

Data Analysis:
While doing these steps, we analyzed the following data we gathered. The vinegar we added had a great part for succeeding the experiment because the vinegar’s effect is the reason why the alternative ink became more effective. We had analyzed that the use of boiling water was the easier way to extract the tea bags. As we researched, there are also various methods on making an alternative ink other than this but the materials needed in what we made is cheaper than the others.

Conclusions:
Tea bags were proven that can use as an alternative for ink. Vinegar contributed to its color, it strengthened it. Cornstarch effectively helped the right consistency of the ink. The boiling and straining part of the processes are efficient for extracting out the tea bags.

Recommendations: Based on the experiment, to have better results of extraction, we suggested that there would be longer minutes of boiling. We also recommend that if you use cornstarch, you can use larger amount of that thickening agent so the application of the ink would be done easily. Instead of directly putting the desired amount of cornstarch in the mixture, it’s better to dissolve it first in warm or cold water so that we can avoid for making lumps. References: 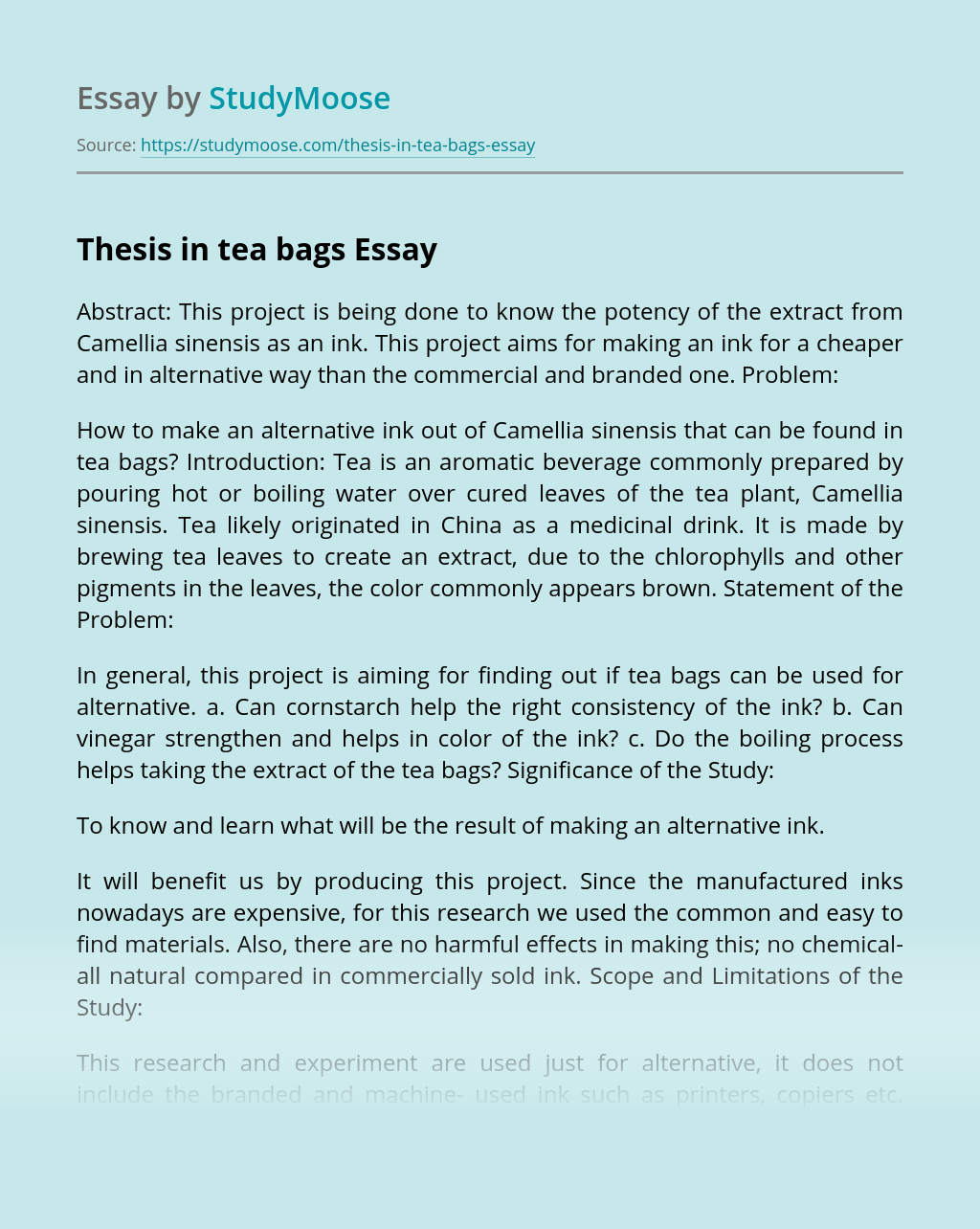