Oedipus Blinded by the Truth

Blindness can be defined as lacking sight or a simple impairment of vision. In opposition, sight is defined as the faculty or power of seeing. While these are literal definitions, the concepts of sight and blindness can have metaphorical connotations as well. The importance of sight and blindness in “Oedipus” create the intriguing plot and progression of the play. When Oedipus is born, his parents are told by an oracle that their child will kill his father and marry his mother.

Don't use plagiarized sources. Get your custom essay on
“ Oedipus Blinded by the Truth ”
Get custom paper
NEW! smart matching with writer

To thwart Oedipus’ fate, Laius decides that the child should be killed.

As Jocasta leaves him on a mountaintop to die, he is rescued and begins to live a life unraveling the unwanted prophecy. Laius and Jocasta both had eyes to see but they were blind to the knowledge that fate cannot be changed. As the play begins, Oedipus is crowned as king for his wit and intelligence after solving the Sphinx’s riddle. He appears to know it all and have the intelligence of a noble man.

To Oedipus’ misfortune, he lives life blindly but the truth will soon be unveiled. His ignorance hinders his eyes from seeing and his mind from comprehending his environment.

Tiresias is an appealing character in the play and gives meaning to the overall theme. He is a blind prophet that informs Oedipus of the truth. Tiresius tells Oedipus that he is the murderer of his own father and married to his mother. He quotes, “I say: you have been living unaware in the most hideous intimacy with your nearest and most loving kin, immersed in evil that you cannot see.

” Oedipus defensively says, “You have blind eyes, blind ears, and a blind brain. ” The irony of his blindness is that Tiresias is not blind at all within the realm of knowledge.

He has a clear vision and sight into who Oedipus is and what his future holds. Oedipus is oblivious and can only see what his eyes choose. The other characters in the play with physical sight are also unenlightened to this truth about their king. Towards the end of the play, Oedipus finally connects each of the pieces. Oedipus has been blind to the fact that Polybus and Merope were not his real parents. He realizes he was never able to control his fate or future and cannot fathom the life he has been living.

New knowledge of his murdering of his father and marriage to his mother, traumatize Oedipus. Unable to cope, he blinds himself by poking out his eyes. He screams, “Eyes, now you will not, no, never see the evil I suffered, the evil I caused. You will see blackness- where once were lives you should never have lived to see, yearned- for faces you so long failed to know. ” Oedipus realizes the horrible life he has been living and is no longer sightless to the truth. The irony can be seen as Oedipus is now literally blind, but fully acquainted with who he is and what he has done.

Oedipus Blinded by the Truth. (2016, Dec 08). Retrieved from http://studymoose.com/oedipus-blinded-by-the-truth-essay 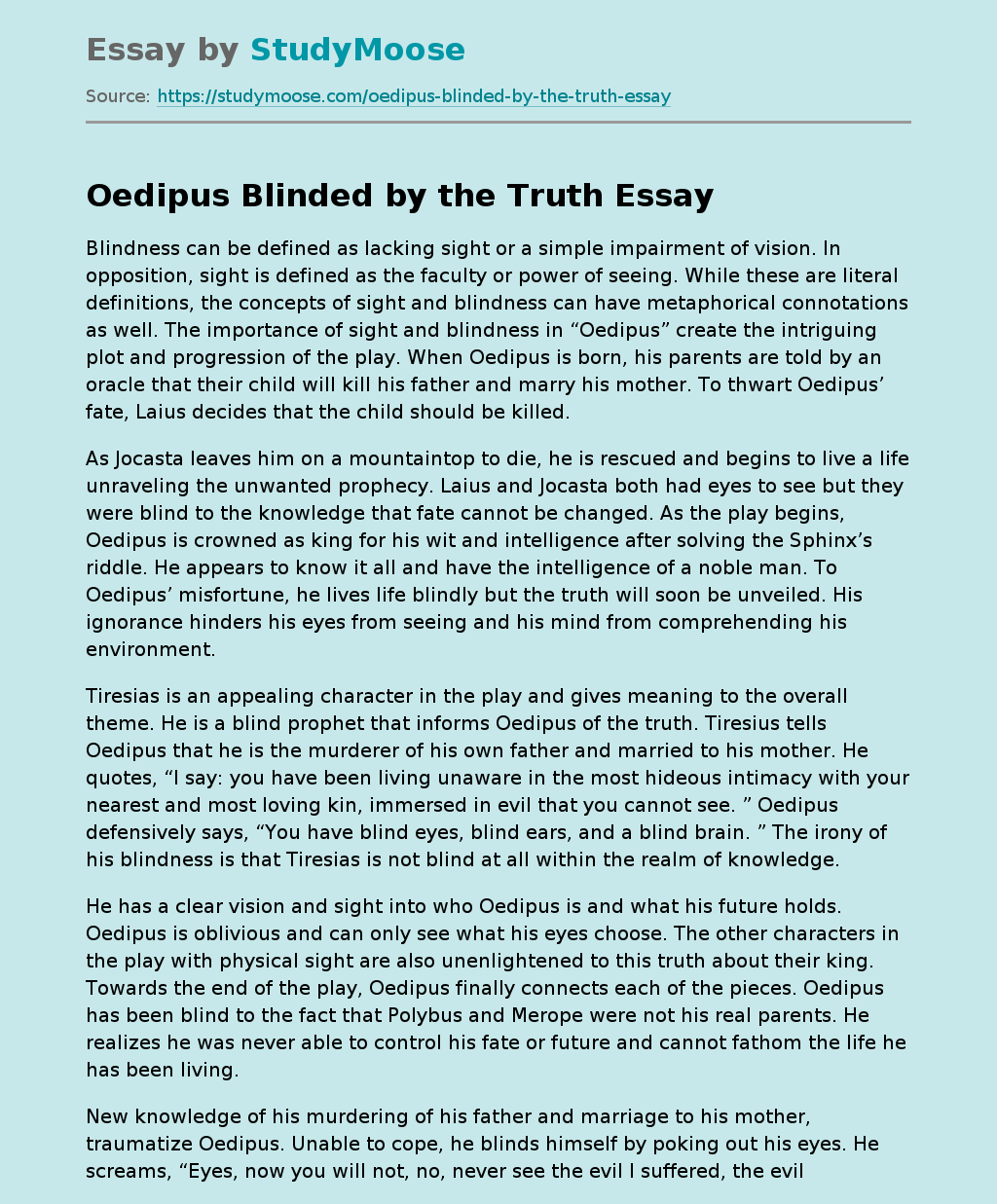