"A Conversation With My Father" by Grace Paley

A Conversation with My Father is a fictional story about a daughter and her dying father. At his bedside, he asks her to tell a story. She tells a tragic story of a woman who gets involved in drugs because of her son but then the son leaves her and she is stuck in the drug lifestyle. She soon after decides to get her life back on track and she succeeds in doing so. The father rejects the daughters ending because he believes that she is avoiding tragedy.

Don't use plagiarized sources. Get your custom essay on
“ “A Conversation With My Father” by Grace Paley ”
Get custom paper
NEW! smart matching with writer

Through ambiguity and connotation in the conversation between daughter and father, Grace Paley shows that people are often afraid of confronting tragedy or even accepting it.

Paley repeats the word end throughout the story. The father in A Conversation with My Father is the one that uses both words the most. In lines 6-7, the father says, Poor woman. Poor girl, to be born in a time of fools to live among fools.

The end. The end. The father at first shows some sort of sympathy by recognizing that this woman was not in the best condition but he goes on to say that it is the end. By the end he means the end of her life and that her life cannot get back on track no matter what. Anytime that the narrator uses the word end it is meant to describe the end of the drug addict woman in the daughters story (Lines 6-8, 14).

Grace Paley also has repetition of the word tragedy.

The word tragedy is also ambiguous throughout the story. In line 9, the father says, what a tragedy. The end of a person. In this line the fathers usage of the word tragedy is not ambigious because it is clear that he is describing the end of the mother in the story. In line 14 the father says, Tragedy! Plain tragedy! Historical tragedy! In these lines it is unsure in what context that father is talking about tragedy. It is hard to tell whether he is talking about the character from the story or his own daughter. It seems like he is most likely talking about his daughter because in the line before that he says, You dont want to recognize it. The you refers to the daughter and the it refers to tragedy. The father believes that a weakness of his daughter is that she does not recognize or accept tragedy.

The usage of the word tragedy and end together is what helps get Grace Paleys point across to the readers in this story. In several lines the father mentions both words together in order to show that people are afraid of confronting tragedy or even accepting it (Lines 9, 14). In line 9 the father states that the end of a person is tragic but the daughter goes on to show her naïveté ness by saying that it does not have to be the mothers end because in reality, the mother could go on to be successful at her current job or become even more successful at something else. It is this point in the story when the father tells the daughter that her writing is no good because she does not recognize tragedy and therefore there is no hope for her. After he tells her that there is no hope for her, he goes on to say The end.

In that point in the story the phrase is used to describe how the father feels about his daughters future (Line 14). In the last line the father says, Tragedy! You too. When will you look it in the face? Here he is pointing out his daughters refusal to recognize or accept tragedy. He is calling her a tragedy because she will not recognize tragedy. At every point in the story before this, the author either used the word tragedy when talking about the mother from the story or about society as a whole but this is the point in the story when he lets his true feelings out. The father believes that society as a whole chooses not to recognize tragedy just like his daughter. He wants to show his daughter that she is turning into a tragedy because she will not accept tragedy like the rest of society. The father seems to believe that if you do not make tragedy a reality then you will become a tragedy yourself.

Although there are specific examples throughout the story to show how the father believes that the daughter denies tragedy, there are several parts where the father also comments on the naïveté of society when it comes to tragedy. In line 6 the father says, …born in a time of fools to live among fools. The word fools refers to society as a whole. The father is trying to say that we are all naïveté because noone recognizes tragedy. He continues in this line to use the phrase the end (Line 6). The connotation of the phrase the end changes in this line. In this line it more refers to the entire general population instead of the specifically the mother from the story or his own daughter even though it seems like that is what he is referring to.

In lines 22-23 the daughter says, Im sorry for her. Im not going to leave her there in that house crying (Actually neither would Life, which unlike me has no pity.) By stating that the daughter shows that she does not believe in tragedy and that she refuses to let a story have a bad ending because it is immoral. This line not only shows that the daughter will not recognize tragedy but the second part, where she states that life would not leave the mother in the same condition either, proves that society feels the same way about tragedy. The phrase in the parentheses is interesting because it points out that life itself would not accept tragedy even though in general life pities no one. The whole point shows that although we as a people generally do not pity anyone or anything, we do make an acceptation for tragedy.

The word tragedy and end are two very strong words in this short story. No other words would get the authors point across. The author used them ambiguously in order to get her point across to the audience. The father uses the story that he had his daughter tell to show her tragedy. He hoped to show her that people are afraid of it and that they often do not recognize it. He wanted her to realize her own tragedy before it led to her end because he believed that denying tragedy is what leads to failure or the end.

"A Conversation With My Father" by Grace Paley. (2016, Jul 05). Retrieved from https://studymoose.com/a-conversation-with-my-father-by-grace-paley-essay 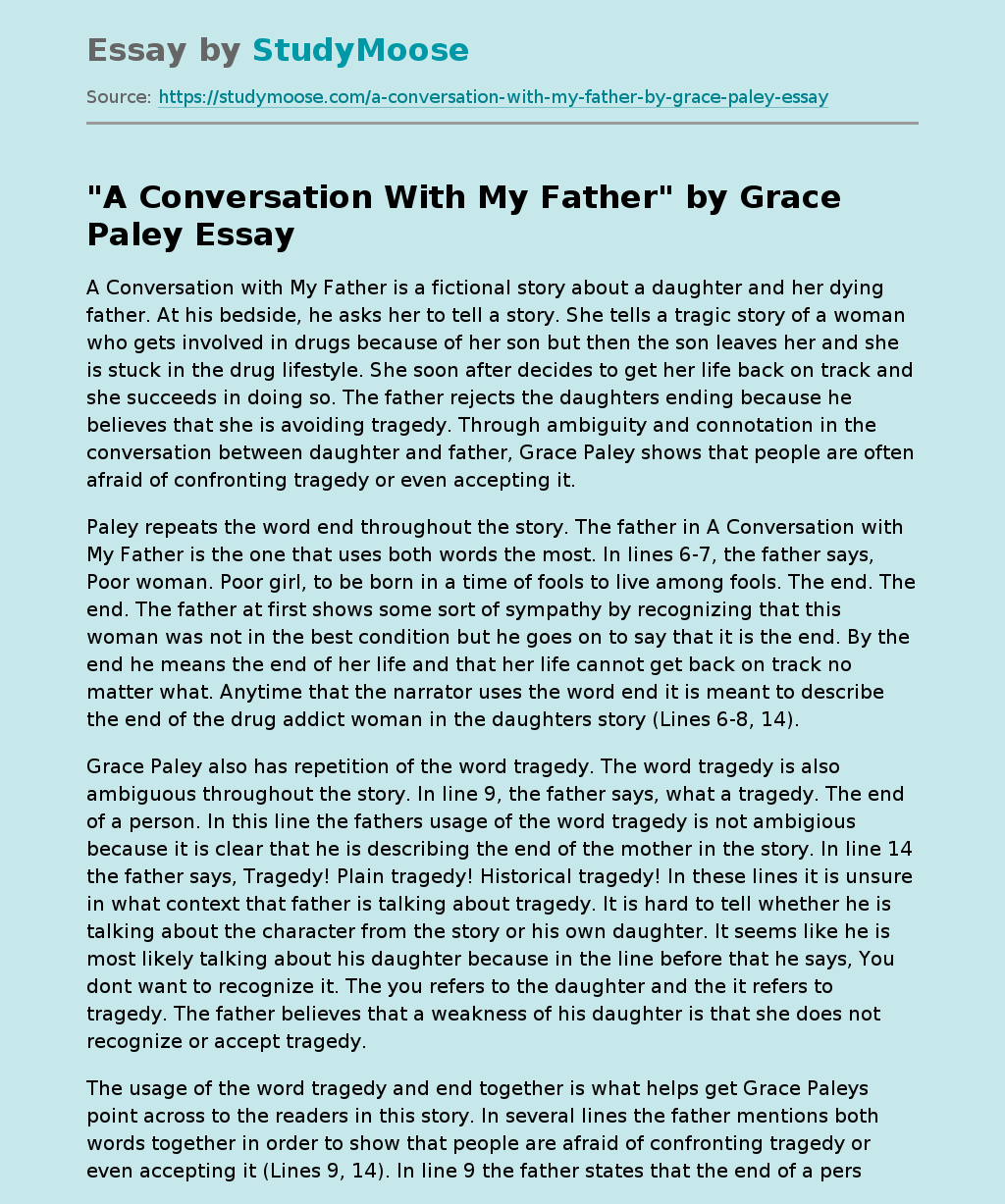