Who is to blame for Neils death?

While there were many factors, which led to Neil’s death Keating played a major role. He was Neil’s inspiration and role model. It was predominantly Keating’s actions that led to Neil’s death. Keating held very Romantic ideals which clashed with the schools teachings and set the Dead Poet society members against the school and authority figures like Neil’s father.

Keating led Neil to believe he could have the support of his parents and an acting career.

Don't use plagiarized sources. Get your custom essay on
“ Who is to blame for Neils death? ”
Get custom paper
NEW! smart matching with writer

Throughout the movie Keating encourages the boys to ‘seize the day’, and ‘suck the marrow out of life. He endorses Neil’s desire to act, despite the fact that it was completely against Neil’s fathers’ rules and the schools objectives, which, as a former student and teacher he must have known. Going to Welton, and later teaching there Keating would surely have been familiar with the pressures teachers and parents place on students to do well, go to university, and succeed in life; early in the movie, after Neil is told to drop the school paper by his father his friends say “why doesn’t he let you do what you want?” and “tell him off Neil”, to which Neil retorts “Oh, that’s rich.

Like you guys tell your parents off, Mr. Future Lawyer and Mr. Future Banker.” From these lines it is obvious that the pressure faced by Neil was wide spread in Welton and it was Keating’s idealistic views that led him to believe, and in turn, Neil to believe that simply telling his father his views on the matter would instantly make everything alright.

Keating should have realized that encouraging Neil would lead to a conflict with the school, or his parents.

By ‘inspiring and preaching freethinking to his students Mr. Keating was asking for trouble. Keating’s teachings led to conflict in all the DPS members lives, as it would have been difficult, if not impossible for students, and even teachers like Keating to hold romantic and existential views without attracting attention and clashing with authority. These clashes are shown regularly throughout the film; Charlie’s phone call from god led to a clash between the principle and himself, another teacher observing Keatings students tearing out pages from text books led to tensions between the staff, and, most importantly Neil’s clashes with his father. Although Neil had had disagreements with his father before Keatings’ arrival he did not deceive or lie to his father until Keating encouraged him to pursue a “fanciful” acting career, and, therefor a independent life. Questioning and/or undermining authority will always lead to a clash between the two sides and if Keating wanted to teach his students, like Neil ‘Carpe dium’ and ‘never let a day pass you by’ then it was his duty to also teach them to tread carefully.

Other than Keating there were other contributors to Neil’s death. Neil’s overbearing father was definitely a factor, as he had Neil’s whole life planned out for him and he didn’t leave any room for compromise or the fact that Neil might not want to be a doctor. After the play when the father brought Neil home he tightened the leash even more:

” We’re trying very hard to understand why it is that you insist on defying us.

Whatever the reason, we’re not gonna let you ruin your life.

Tomorrow I’m withdrawing you from Welton and enrolling you in Braden Military School.

You’re going to Harvard and you’re gonna be a doctor.”

Neil now felt even more trapped and knew he would never be able to do what he wanted with his life, he was going to be separated from his friends and would ‘waste’ the next ten years at military school. He saw the only way out as suicide. Peer pressure also played a role in Neil’s death, as if it weren’t for his friends he would not have been part of the Dead Poets Society and although he would still have been under Keating’s influence he would not have had as much support from his friends to defy his father and pursue acting.

Keating was a Romantic. Free thinking and individuality was what he drilled into his students, but he wasn’t careful, he did not teach his students caution and this led to many undesired results, like Neil dying and Charlie getting expelled. In another era, in another school his teachings may have fitted in, but Welton was not the place for a teacher like Keating, he was too against the grain. As with everything in life there is never any one person to blame and in DPS nothing is different, Neil’s parents and friends also unknowingly helped steer Neil to his early death.

Who is to blame for Neils death?. (2016, Jun 23). Retrieved from https://studymoose.com/who-is-to-blame-for-neils-death-essay 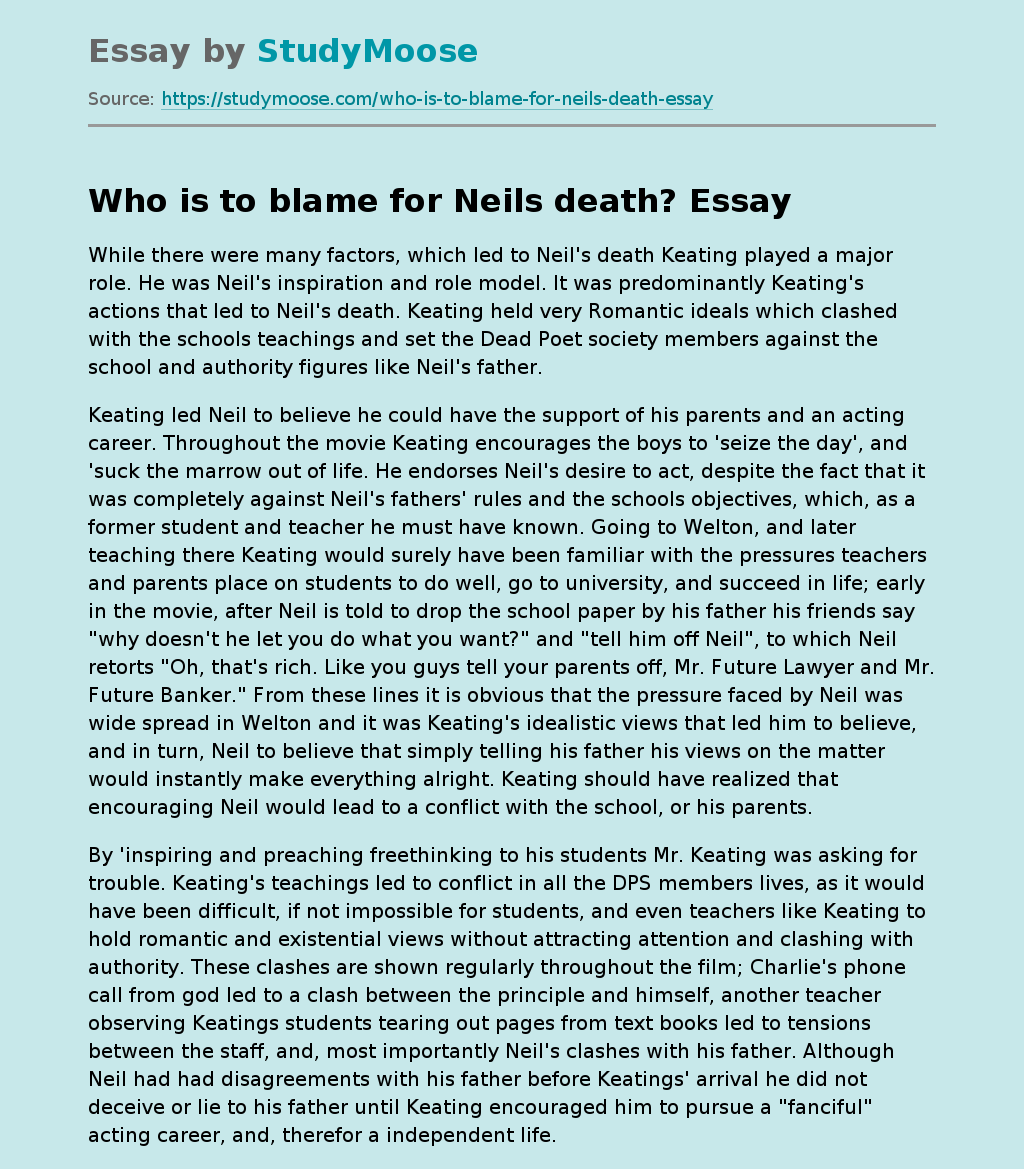