Oedipus the King an Aristotle’s Tragedy

The Greek drama Oedipus is clearly a Aristotle’s tragedy. It definitely meets the five main criteria for a tragedy: a tragic hero of noble birth, a tragic flaw, a hero‘s downfall, a moment of remorse, and a catharsis. Aristotle in his Poetics defines Oedipus as being a definite example of the form and purpose of Aristotelian tragedy. In tragedies the Greeks dramatized climactic events in the lives of heroes, and Oedipus story is no different. By using many different literary devices it brings moral dilemmas of action and motive to the public stage.

Don't use plagiarized sources. Get your custom essay on
“ Oedipus the King an Aristotle’s Tragedy ”
Get custom paper
NEW! smart matching with writer

The action is set out over the timeframe of one day, which will according to the prophet Tiresias will bring Oedipus birth and death. Oedipus clearly meets the first of the five criteria because Oedipus the son of Laius, who was king of Thebes. Is the main protagonist and within his character lies a tragic flaw. This tragic flaw is of course Oedipus killing his father Laius, and then marrying Jocasta, his mother.

Oedipus and the rest of the characters discover this mistake that was actually made long, long ago and cannot be reversed. He unintentionally is the architect of his own downfall.

The strengths that once lead him to solve the riddle behind the sphinx later lead him to his own destruction. In the words of the priest; “you helped us stand, only to fall once more. ” Which lies at the root of the plot. It was fury that lead him to kill Laius by mistake.

Even at the beginning of the story, when we are told that Oedipus is the son of Polybus, he is still of noble birth and Polybus is king of Corinth. We realize that these actions have taken place much earlier in the story than the characters do. However, both of these events actually took many years ago.

The hero’s downfall in Oedipus The King is when Oedipus, Jocasta, and all the other characters in the story realize that Oedipus actually did murder Laius and that Jocasta is indeed his mother as well as his wife. This occurs rather quickly, somewhat close to the end of the play. The audience sees this coming long before it actually does, however. In one of the passages of Oedipus speaking with Jocasta, just about everything is spelled out for us. Jocasta speaks of Laius leaving the castle with just a few servants and him being killed where three roads met.

Oedipus claims that he killed somebody where three roads met, who had a few servants with him; indicating that he was the killer of his father. He goes on to make absolutely sure, even though it is obvious that he was Laius’s killer. The moment of remorse comes at the end of the story, when one of the servants who had accompanied Laius on his final journey came to speak to Oedipus. He was the only one who survived the attack, and told that contrary to rumor, Laius was killed by one man, not robbers. He then pointed out this one man, Oedipus. We are told soon after that Jocasta hung herself upon hearing this.

When this news reaches Oedipus, he takes the pins from her dress and stabs his eyes out. The catharsis, or emotional release of the audience, comes at the same time as the remorse. The audience suddenly feels sorry for this poor man who has unknowingly killed his father and married his mother, for the people of this land who have been suffering from an awful curse because of it, and for the unfortunate Jocasta, who was basically an innocent bystander in the whole confusing disaster. Despite constant denial of his fate he cannot deny the work of the gods.

Oedipus the King an Aristotle’s Tragedy. (2020, Jun 02). Retrieved from http://studymoose.com/oedipus-king-aristotles-tragedy-new-essay 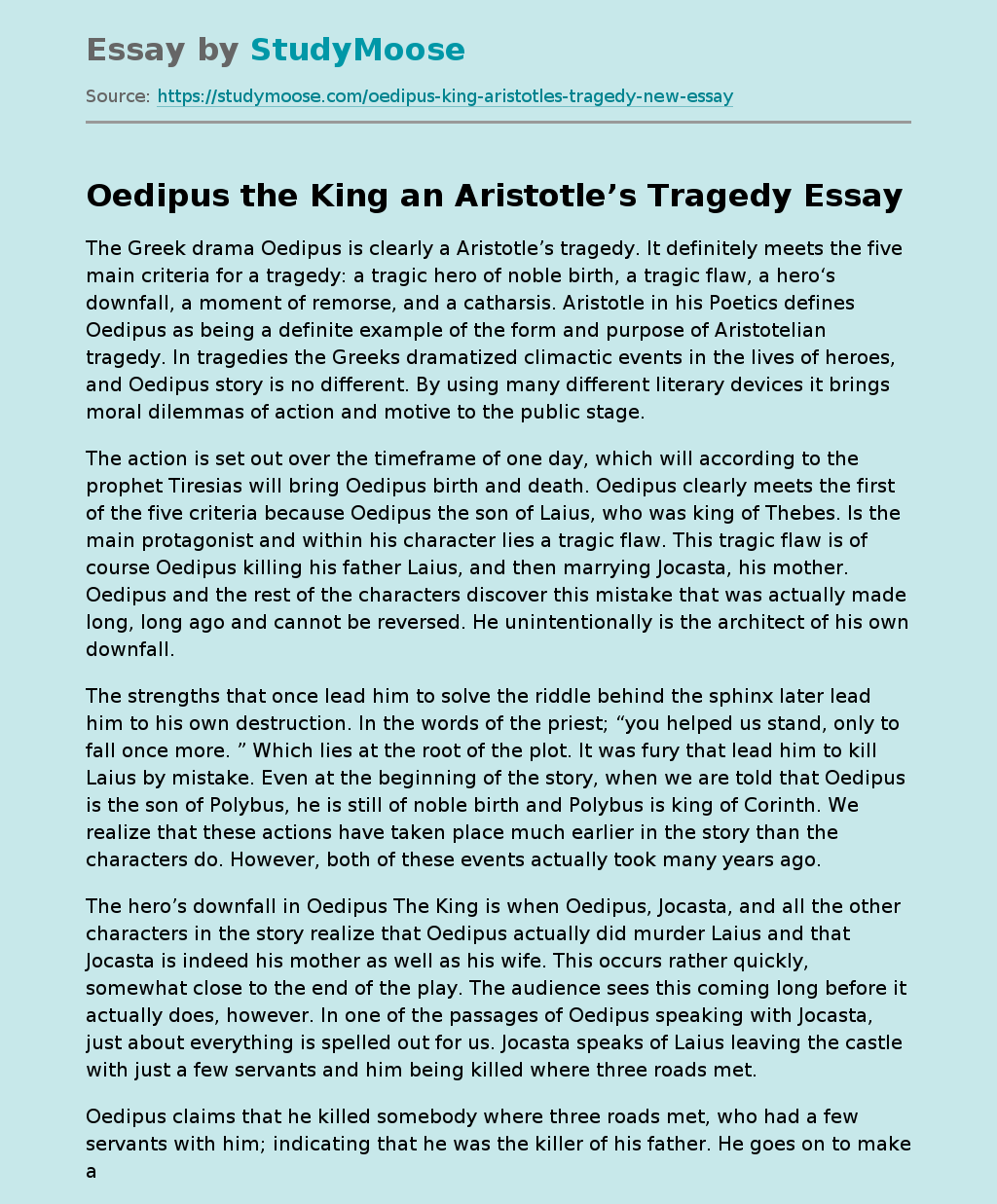