The Loudest Voice By Grace Paley

The story opens with clear elements of social setting relating to the narrator’s life in a Jewish community. The names of the people in the story are, for the avoidance of doubt, very Jewish (“Mr. Abramowitz” line 5, “Ah, Mr. Bialik” line 6). Opening the story with characteristic Jewish names helps us formulate an identity of the society which Shirley, also quite Jewish name, lives in. This information allows the reader to visualize the characters in a better way. Without giving those names, it is possible to imagine Swedish or Russian families with their own characteristics.

Don't use plagiarized sources.
Get Your Custom Essay on The Loudest Voice By Grace Paley Just from $13,9/Page

Jewish names give a specific picture of a typical Jewish neighborhood. Shirley’s environment is by definition extremely loud and very much alive. The reader can really imagine himself walking down the busy street and hearing doors slamming, porcelains breaking, mothers yelling and making a hustle. “There is a place where dumbwaiters boom, doors slam, dishes crashes” (page 1, lines 1-2). Albeit the fact that this cultural is very noisy, the most prominent word on the first page is the word “quiet”.

This word is repeated many times by different people, and therefore cannot be accidental. “‘Be quiet’, the grocer says”(page 1, line 12). “Please Shirley, be a little quiet”(line 13).”Be quiet! Be quiet!” (line 14). Since we know that the story took place in 1959, several years after the WWII, we can conclude that perhaps the people surrounding Shirley wanted to reduce their presence by not “disturbing” others, or maybe they felt pressure from the external society for being different. There are more characteristics of religion in Shirley’s world. The school has its own plans for the students and the teachers decide to prepare, with great joy, a play about Christmas. The strange idea to create a Christian show with Jewish players to a Jewish audience suggests to us that the education system really wants them to embrace their tradition. On page 2, line 11, Mr. Hilton, a teacher, says to Shirley: “Now, Shirley, you know, I suppose, that Christmas is coming.” Why is it so obvious that she knows that? After all, this is not her religion. Neither her parents celebrate Christmas, nor does she dream of a kind old man with a beard who wears a red suit and rides a sleigh with reindeer in the sky. In fact, the school system suppresses the “Judaism” and teaches children how fun and pleasant it is to be a Christian at Christmas. The children learned songs such as “Holy Night” and “Deck the Halls” (page 2 lines 26-27) and the teachers became disturbingly happy, because now they feel at home, with Christian songs and Christian atmosphere and “Christian students”. (“The teachers became happier and happier” page 2 line 24). Further proof of that religious pressure is on page 3 line 24: “your mother and father ought to get on their knees every night and thank God for giving them a child like you”.

As we know, only Christians stand on their knees and thank God every night before bed. Jewish people don’t do that, they have another prayer. This is an ancient Christian custom where they ask God to take their soul after their death. Also, the choice of the words “ought to” suggests that they must do it “the right way”, the Christian way. These all are examples of social setting since they represent Shirley’s surrounding environment and they have critical role in making us “see” the story through different eyes. Various features of spatial setting are not ashamed to stand out from the page as well. On page 1 we can notice that the school’s building is red. “But just around the comer, is a red brick building” (line 16). I think that this isn’t coincidence. The color red, in Christianity, is associated with the blood of Jesus Christ. I believe that the color of that building could have been any color: white, gray, yellow and even blue. That fact was originally prominent to me for I wouldn’t use this color for a school’s walls. It is well known that certain colors are much soothing and inspiring than others.

For example, the color azure is more relaxing than red. Therefore, it can be concluded that choosing the red color specifically for an education institution’s building emphasizes the secret desire of the surrounding society to instill their views in the subconscious of the younger Jewish generation. In fact, this color relates directly to the religious message of the story and one cannot ignore this little, yet great, word “red”. Nothing better symbolizes Christmas’s celebration than a big decorated tree. The City Hall has placed a Christmas tree at the corner of Shirley’s neighborhood. “On the street corner a tree had been decorated for us by a kind city administration” (page 4, last paragraph). They could have chosen a smaller and more modest decoration to indicate the holiday to the Jews. They could have decorated the street with some ribbons, dolls or colored lamps. But they chose to “stick” this big tree in front of the Jews. They did that regardless of the religion of the street’s inhabitants. In addition, no one asked the Jewish citizens what they think about street decoration.

In my opinion, this is further proof of the city’s indifference toward its Jewish citizens. No wonder that tree was “a stranger in Egypt” (page 4, last line). In conclusion, there is no doubt that the story “The Loudest Voice” contains rich, creative and though-provoking types of setting which help us to explore the world of Shirley, the narrator. By focusing on some examples of social and spatial settings, a big, religious and unfortunate message was revealed to me, as I have described it.

The Loudest Voice By Grace Paley. (2016, Feb 29). Retrieved from https://studymoose.com/the-loudest-voice-by-grace-paley-essay 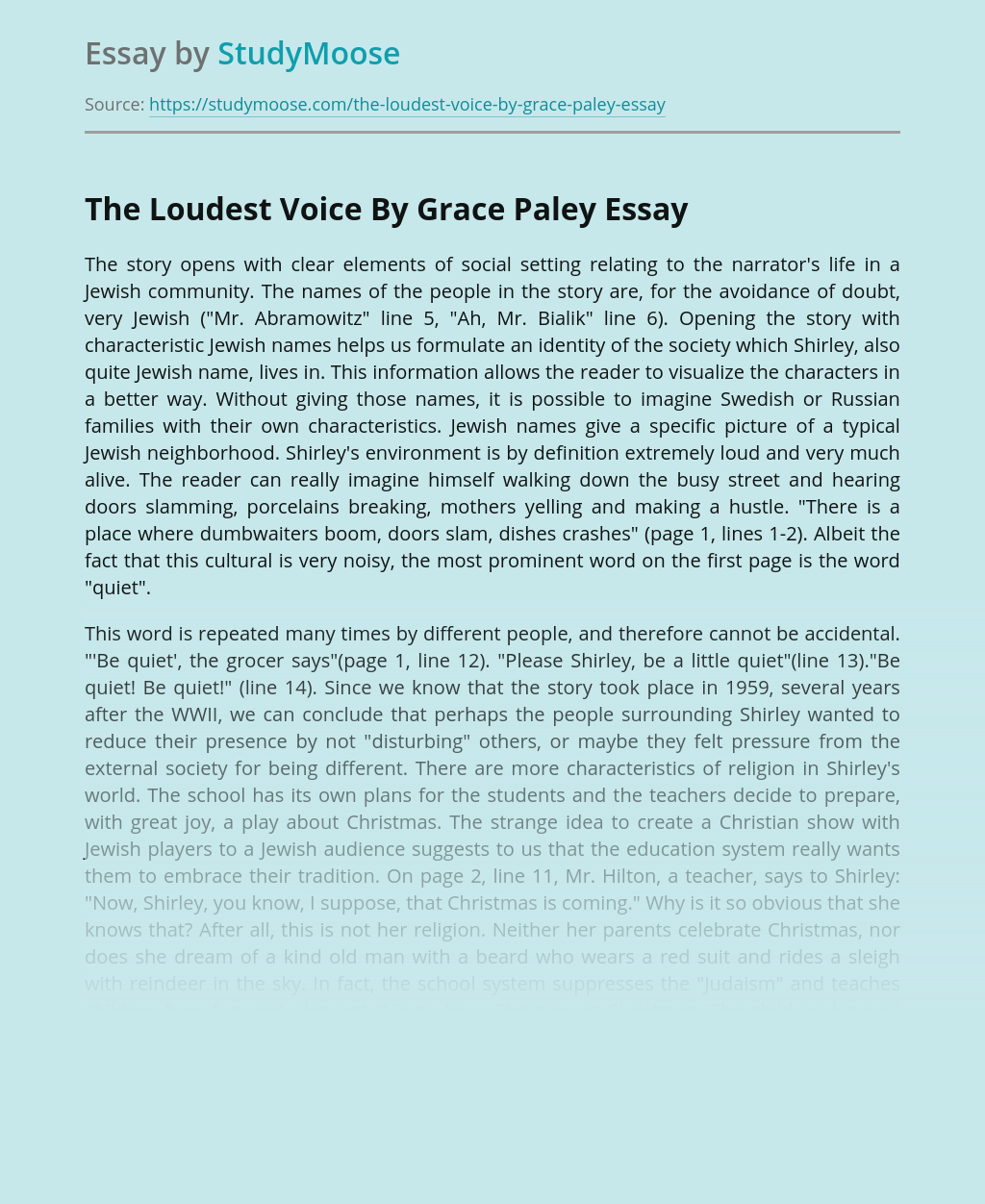 The Merneptah Stele is an enticing inscription by the Ancient Egyptian king Merneptah discovered in 1896 at Thebes by Flinders Petrie. The inscriptions are put down on a ten foot high piece of black granite. The text contained in these inscriptions is mainly an account of the king’s victories in battle during the last decade...

Evaluation of Shylock as a Tragic Hero

The Period from 332 B. C. to 70 A. D. refers to the age of Hellenism under the rule of Alexander the Great, king of Macedonia. The period 332 B. C. marked the conquest of Judea by the Greeks, which subsequently imposed the dissemination of the Greek way of life, taxation, and economic activities designed...

Oppression and Relationship in The Lemon Tree

The Lemon Tree provides viewers with an outstanding portrayal of life’s struggles as a Palestinian woman being oppressed due to an ongoing Israeli-Palestinian conflict. The primary character, Salma Zidane struggles from hard economic challenges ever considering that she has ended up being widowed for 10 years and her two daughters are wed and her boy...

Pride (without complacency and with an awareness of imperfections) is important in spurring individuals and a society on to greater achievement. The loss of faith in the achievements of the past, history and traditions can be an important factor in the decline of a culture or a civilization. a sense of national pride and purpose...