The novel Night, by Elie Wiesel, puts you in his shoes. The novel makes you be in his mind throughout the Holocaust. The night is not like other novels because it puts you through the emotions that the author felt while he was in the Holocaust. Wiesel’s family had a big impact on his style and the emotion that he puts in his writing. Elie Wiesel was in the Holocaust for almost all of his childhood. Elie Wiesel’s Night was affected by the events in his childhood, his family, and his career; these events changed his life and set a base for his style of writing.

Don't use plagiarized sources. Get your custom essay on
“ Night by Elie Wiesel Literary Analysis ”
Get custom paper
NEW! smart matching with writer

The exposition of Night is the introduction of the Wiesel family. Elie and his family all live in a small town in Sighet, Hungarian Transylvania. When he was young, earlier in Night, he became interested in Jewish mysticism. Elie learns that Moshe the beadle is an expert in Jewish mysticism and is willing to teach him. One of the main conflicts in Night was that World War 2 was going on for a couple of years at the beginning of the book. The citizens of Sighet wondered if the front was moving closer to them if the war would end before it reached Hungary. At this point in Night, all foreign Jews were deported, including Moshe. Even though Moshe was deported he was able to escape while the SS murdered the other foreign Jews. Moshe returned to Sighet to warn the citizens about the dangers that were coming but nobody listened to him. The rising action in Night begins with the German soldiers entering Sighet, the town that Elie and his family live in, and form ghettos. In the ghettos the learn that they will be transferred to a concentration camp.

While making their way to the concentration camp, Elie and his father Shlomo are put into the same car as Mrs. Schächter. Mrs.Schächter shouted relentlessly for three days about seeing the fire. The climax in Night is when Elie and his family arrive at Birkenau and the men are separated from the women. “Men to the left! Women to the right!” (Wiesel 27). From Birkenau, Elie and his father go to Auschwitz and eventually travel to Buna to work in an electrical factory. In Buna, Elie thinks about the death, despair, and loss of hope that he has experienced under Nazi occupation. The falling action in Night is that after Elie has been in camp for a couple of months he has to have an operation on his foot. After he gets the operation, the camp is evacuated because there are bomb threats toward the camp and the prisoners begin a fifty-mile run to Gleiwitz. Along the journey to Gleiwitz, due to malnourishment and starvation, most prisoners die before making it to the train. By the time that the train reaches the concentration camp Buchenwald, only twelve prisoners are still alive. Throughout this journey, Elie and his father help each other stay alive. The resolution in Night is that Elie’s father dies, leaving Elie very conflicted because he feels guilty for feeling relieved that his father is dead because now Elie doesn’t have to share rations with him and take care of him, but he also feels very upset because his father is now deceased. “After my father’s death, nothing could touch me anymore.” (Wiesel 107). Elie does survive the holocaust.

Night by Elie Wiesel is filled with symbolism. “‘The yellow star? Oh well, what of it? You don’t die of it….’” (Wiesel 9). In this quote, Elie is saying that he is not dying from the yellow star, which represents the Star of David. He is saying that he is dying because of the evil people not because of what he believes in. I enjoy this quote from the book because it shows how Elie is dedicated to his religion. 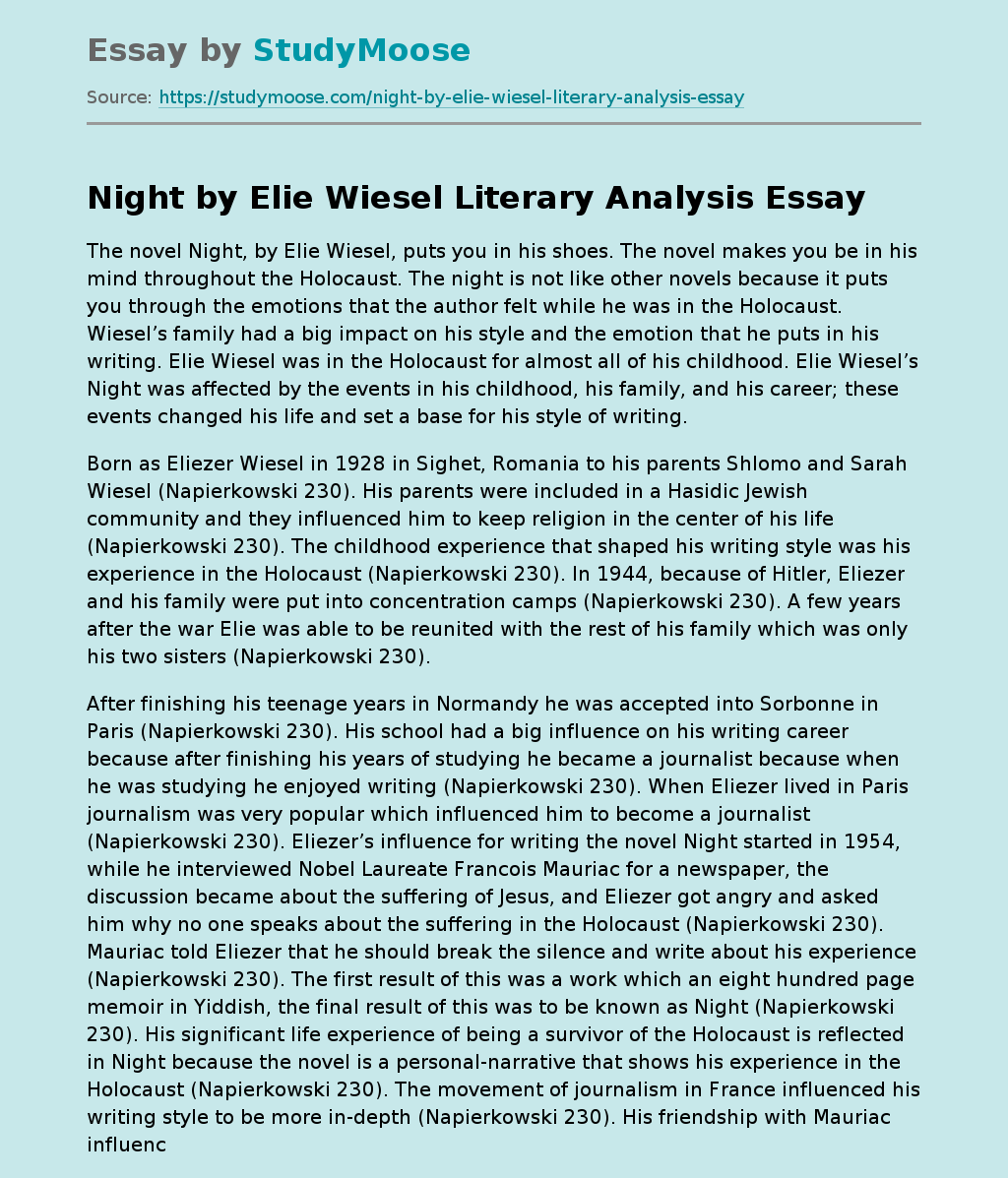