Critical Lens Essay on the book Night by Elie Wiesel

“We must always take sides. Neutrality helps the oppressor, never the victim. Silence encourages the tormentor, never the tormented.” That quote is from Elie Wiesel in his Nobel Peace Prize Speech. I agree with the quotation. In the story Night by Elie Wiesel, many elements correspond to the quote and to the idea of silence and complicity. Wiesel says in his book that many different people were silent because they were not directly affected by the Holocaust, and thought that if they did something to try to stop it, then they themselves would get hurt.

Don't use plagiarized sources. Get your custom essay on
“ Critical Lens Essay on the book Night by Elie Wiesel ”
Get custom paper
NEW! smart matching with writer

He also explained how people like Moshe the Beadle and other characters in Night who were humiliated by fellow Jews did not believe that the Holocaust was occurring. Overall, the Jews, God, and the German citizens were all silent during the Holocaust. Their silence encouraged the Nazis to gain strength and reach the magnitude of eventually massacring six million Jews.

That quote refers to when his father is beaten at the concentration camp and Eliezer just stood there watching it and doing nothing to stop it. The setting of the story Night takes place in a small town of Transylvania in 1941. To this day Wiesel still feels guilty about his inaction. The silence of the victims and the lack of resistance to the Nazi threat is one way in which neutrality and silence helps the tormentors, or in this case the Nazis and never the victims who were the Jews.

Even when Eliezer was being led to the fire pit and thought he was going to die, he did not try to run or escape.

In the concentration camps, the Jews greatly outnumbered the Nazi soldiers. Maybe if they revolted then even though many would die in the attempt, many could still escape and the number of people who died would be insignificant to the amount of Jews who died when they did not rise up together. It is implied throughout the text that silence and passivity are what allowed the Holocaust to continue. Wiesel’s writing of Night is itself an attempt to break the silence, to tell loudly and boldly the new generation of people about the atrocities of the Holocaust. He feels that people need to know so that they can find out the warning signs and prevent anything so horrible from ever happening again.

“Where is God? Where is He?” (61) someone behind Eliezer asked. This quote from Night refers to when a child is hung in front of all the Jewish prisoners to scare them into behaving. “For more than half an hour the child in the noose stayed there, struggling between life and death, dying in slow agony under our eyes. And we had to look him full in the face. He was still alive when I passed in front of him. His tongue was still red, his eyes were not yet glazed.” (62) Behind Eliezer, he heard the same man as who said the above quotation asking: “Where is God now?” (62) And Wiesel heard a voice within himself say: “Where is He? Here He is–He is hanging here on this gallows. . . .” (62) Those quotes show that God was also silent during the Holocaust. It is the idea of God’s silence that Eliezer finds most troubling.

Eliezer’s point of view during the story Night changes from not questioning why he prays, to believing that God is dead and does not care about him or any other person on earth. When a man asks, “Where is God?” (61) the only response is “total silence throughout the camp.” (61) Eliezer and his fellow Jews are left to wonder how an all-knowing, all–powerful God can allow such horror and cruelty to occur, especially to such devout worshipers. The existence of this horror, and the lack of a divine response, forever shakes Eliezer’s faith in God. At first Wiesel used to pray without questioning God’s existence. Now, Eliezer does not fast on the holy day of Yom Kippur and believes that God has died along with the boy that was hung. The silence of God shocks Eliezer and allows the Nazis to persecute them because the Jews hope for a miracle that never comes from a God who does not exist.

“The opposite of love is not hate, it is indifference.” That quote is also from Elie Wiesel’s Nobel Peace Prize Speech. The German people living right next to the death camps such as Auschwitz and Buna could smell bodies being burnt, and could see the fire and smoke yet they did nothing. This is complicity, which is defined as the involvement as an accomplice in a questionable act or a crime (according to dictionary.com). The Germans were silent, and because of their silence, the tormentors and Nazis were able to further persecute their victims, who were the Jews and many other ethnic minorities that were used as scapegoats. In Night, Eliezer says, “Never shall I forget that nocturnal silence which deprived me, for all eternity, of the desire to live.”

This famous quote can be interpreted to mean that the silence of the Germans and the Allied forces is what really allowed the Jews to be murdered so heartlessly. Even though the German civilians did not do anything, Eliezer blames the Allied countries such as Great Britain and the United States for their slow response in reacting to the Nazi threat. It was said years after the Holocaust that if any powerful figure got on the BBC news radio station, telling all of the Jews to evacuate their homes and flee to Russia because all of the other Jews are disappearing, then more Jews might have been saved. Eliezer and his family were taken to Birkenau in 1944, when the war was already going on for many years. His family could have been warned and most likely saved from the Nazis. It was the neutrality and the lack of involvement of the Allied forces that led to the death of the Jews because they were not warned.

In conclusion, the quote “We must always take sides. Neutrality helps the oppressor, never the victim. Silence encourages the tormentor, never the tormented” is valid because the silence of the Jews, God, the German civilians, and the Allied forces contributed to the mass murder of millions of people. All of these people in their own separate ways, due to their neutrality and silence during the Holocaust period, allowed the victims to be murdered. The Jews did not rise up against their tormentors, and therefore allowed themselves to be killed. God did not act to protect his “chosen people” and at the moment of a horrible sacrifice, God does not intervene to save innocent lives. The German people went along with Hitler’s grand scheme as puppets. 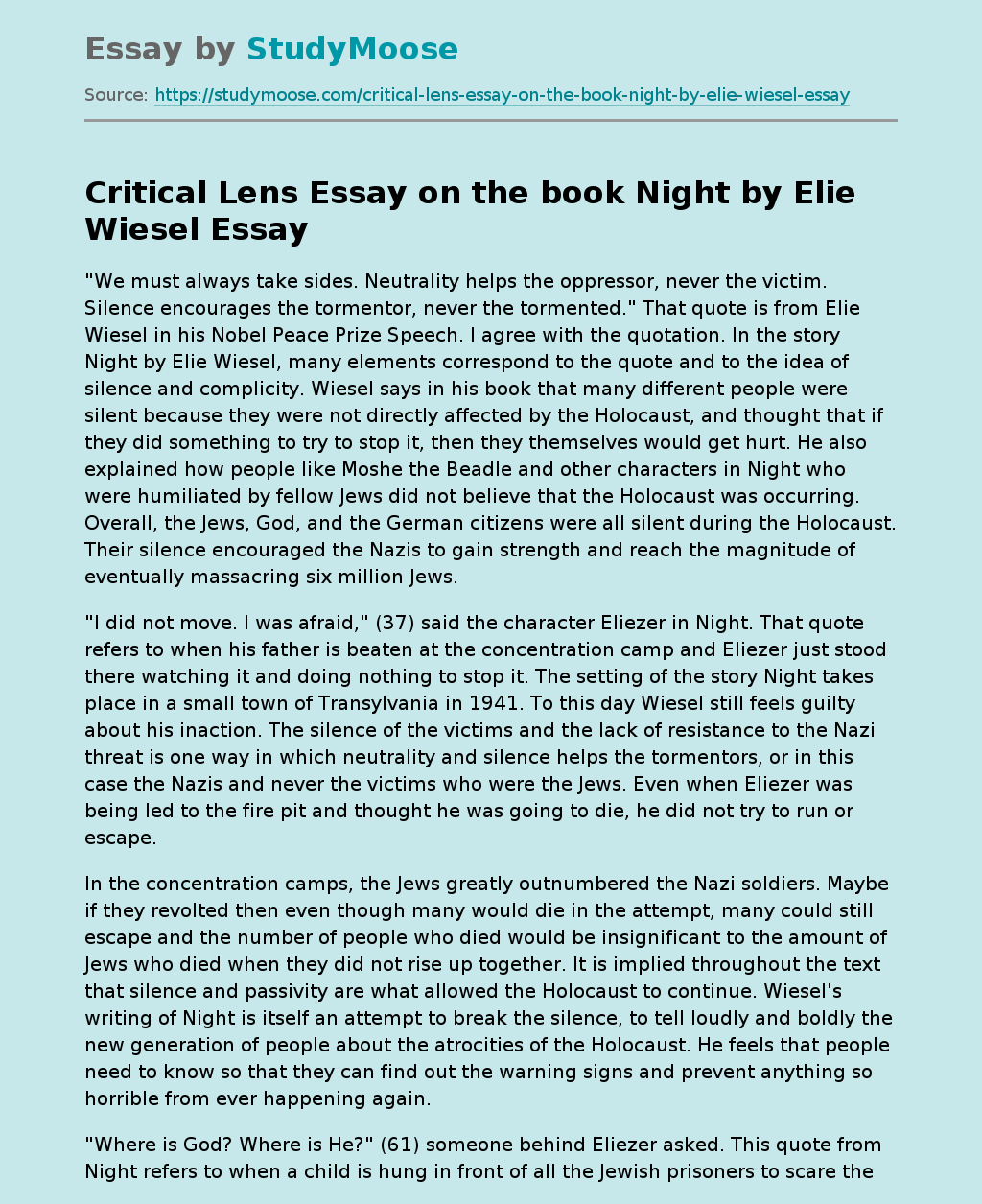