This book invoked a lot of empathic and sympathetic emotions in my senses. I loved the symbolism, imagery, and allegory of this text, although painful, it portrayed the life of Jews and their torture. “Night” is used throughout the book to symbolize death, darkness of the soul, and loss of faith. As an image, it comes up repeatedly. Even when the scene is literally set during the day, night may be invoked. Consider all the terrible things that happen at night: Mrs.

Don't use plagiarized sources. Get your custom essay on
“ Night Analogies ”
Get custom paper
NEW! smart matching with writer

Elie and his father arrive at Auschwitz and see the smokestacks and wait in line all night long with the smell of death in their noses; there is the night the soup tastes like corpses(67); they march through long nights and, stacked on top of each other, smother each other to death in the night; Elie’s father dies during the night (110-112).

As Elie says himself, “The days were like nights, and the nights left the dregs of their darkness in our souls” (100).

Night is thus a metaphor for the way the soul was submerged in suffering and hopelessness. It represented the endless torture and death of these HUMAN.I empathize the word humans because if one reads this book, you would think the Jews were in human. All the pain and misery leads one to believe that Jews were not even worthy enough to be called a human, but the question that arises all the time for me is….

WOULD A DOG BE TREATED IN SUCH A MANNER?

The fact that fire and flames were used to symbolize death was quite disturbing at times throughout the scenes of this book. In Chapter two, as the train full of Jews from Sighet approaches Auschwitz, Mrs. Schachter has a vision of fire and flames. (24-27) She screeches about the fire through the long night and then again the following night. When they at last arrive at Auschwitz, the inhabitants of the car understand what she was talking about: the crematoria, where bodies of prisoners are burned.

“My soul had been invaded– and devoured—by a black flame. Fire is an ever-present threat of death; the view and the smell of the crematoria permeate all aspects of life in the concentration camps, reminding the prisoners of their closeness to death. It was never a moment that peace dwell ed with them while in the confines of the German empire.

Lastly the image of corpses is used not only to describe literal death, but also to symbolize spiritual death. After liberation, when Elie looks at himself for the first time in many months, since the Ghetto, he sees a corpse in the mirror. (115) The look in his eyes as he stares at himself never leaves him. It speaks of the horror he has experienced and seen, which stole his childhood innocence and his faith in God’s mercy and justice. This was the hard pill to swallow. Not only does he feel and look dead, but he is far from dead. There comes a time when you have been beaten and town down so much and so long to the point that you actually become dead. This scene illustrates the dying of humanistic characteristics while still living, (THE WALKING/LIVING DEAD!) Who could ever be okay with living like this?? 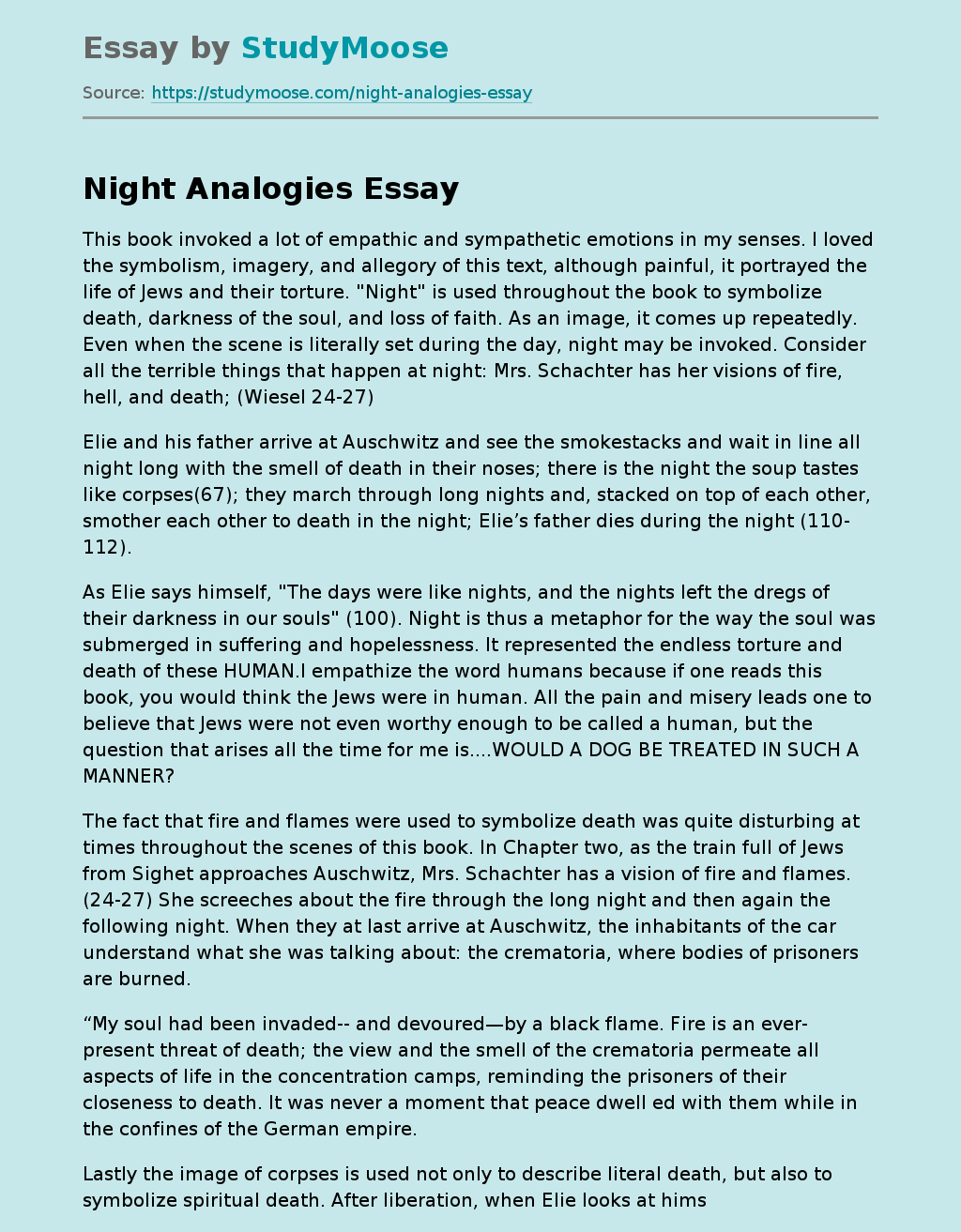