Dehumanisation in Night by Elie Wiesel

The text Night, by Elie Weisel, is a clear example of how the constant torture of dehumanization and brutality were persistent for individuals during the Holocaust. The Oxford English Dictionary defines dehumanization as “the process of depriving a person or group of positive human qualities.” The dehumanization of millions of Jews, paired with the confronting brutality, was a constant for the victims of the Holocaust and is clearly shown in the text Night. This essay will discuss how the new laws placed after the raidings of Sighet, the irregular serving of inadequate food rations, and the public beatings and cruelty all portray the constant dehumanization and brutality as shown in Night.

Don't use plagiarized sources. Get your custom essay on
“ Dehumanisation in Night by Elie Wiesel ”
Get custom paper
NEW! smart matching with writer

After the German troops raided the small town of Sighet, home to Elie Wiesel, many dehumanizing edicts were thrust upon them, including, the forced display of the yellow star of David on all outer garments and two ghettos built around them. The identification process started with the yellow armbands. Having to wear the yellow star of David armbands instantly set the Jews apart.

Making them feel isolated and different. Undeterred by the isolation, many of the Jews remained optimistic, Elie’s father saying “The yellow star? So what? It’s not lethal …” Then came the strict new laws, which forbade Jews from entering restaurants and cafés, traveling freely, attending synagogues, and a new curfew of six o’clock in the evening. The ghettos were the most overt form of segregation, confining the Jewish people of Sighet to just four streets.

The yellow star of David, to inflict shame and isolation, the laws that restricted Jews from eating at restaurants or cafés or leaving Sighet and segregating them to the four streets of the ghetto they built are all horrendous displays of dehumanization and the brutality of their reality forced on the Jewish people of Sighet.

Dehumanisation in Night by Elie Wiesel. (2020, Sep 01). Retrieved from https://studymoose.com/dehumanisation-in-night-by-elie-wiesel-essay 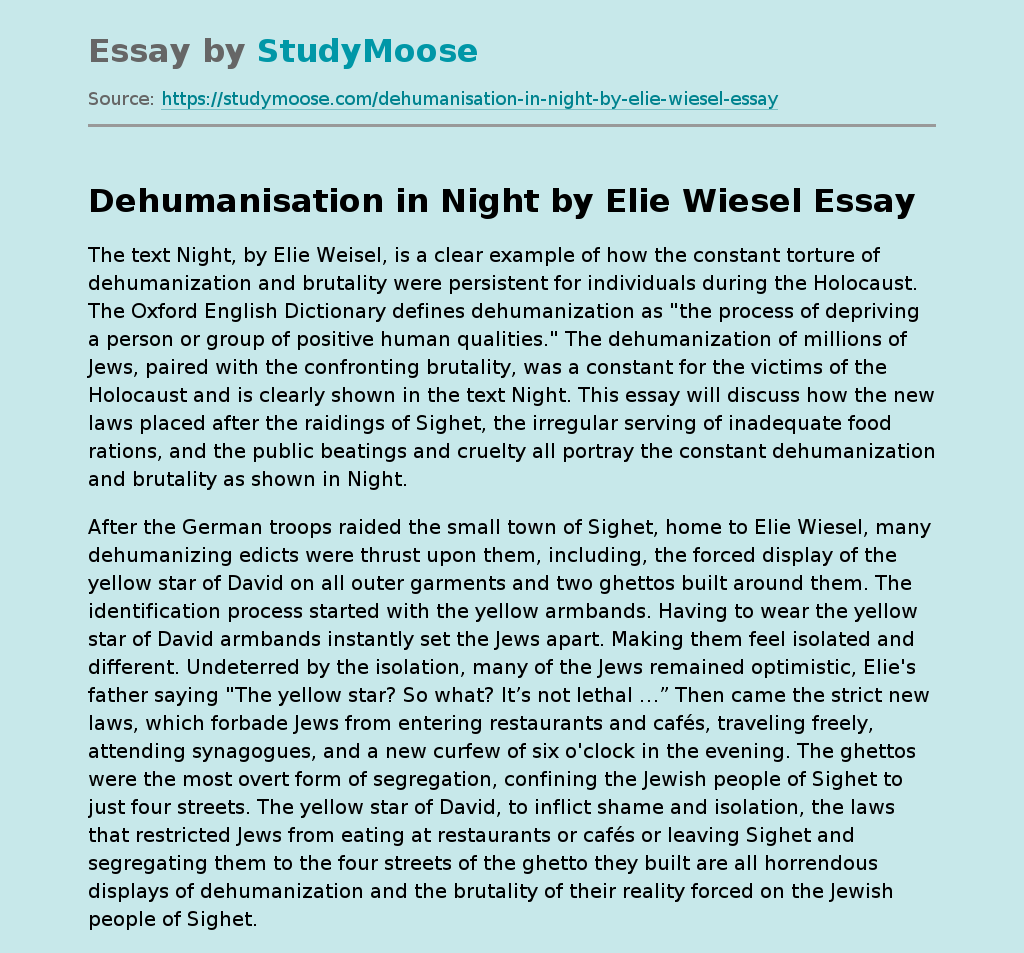