A Reflection Paper on Night by Elie Wiesel

Night, an autobiography by Eliezer Weisel, recounts his experience of being a Jew in the Holocaust during the early 1840’s. The story explores the escalation of fear in the Jews and its overriding presence in their lives, Eliezer’s crisis of faith, and the loss of humanity in the Jewish people including the numerous images of death put forth in the book. Weisel portrays their fears in ways we could never dream of and makes us look at how people are affected spiritually in the wake of dehumanizing suffering.

Turn in your highest-quality paper
Get a qualified writer to help you with
“ A Reflection Paper on Night by Elie Wiesel ”
Get high-quality paper
NEW! AI matching with writer

Also, he portrays in the story how the Jews were stripped of everything in the Holocaust including their human dignity and self worth.

The escalation of fear is a common thread throughout this book. In the beginning, when all foreign Jews were expelled from their town of Sighet, the remaining Jews pretended that those exported were better off wherever they were now. Then, when Moishe the Beadle (an exported Jewish foreigner) returned to Sighet one day and told the Jews how he had escaped by pretending he had been killed along with the others, he was titled as a madman who only wanted their pity.

The Jews refused to even listen to Moishe the Beadle let alone accept anything he said as the truth. The Jews lived in denial and in a state of pretending up until the point in which they were transported and brought to the concentration camp at Birkenau. At that point fear became real in the eyes of the Jews for they saw for themselves the flames from the crematorium and the smell of burning flesh.

From then on fear guided their every waking moment for it enveloped their common sense and being. It began to control them and it made them act in unimaginable ways. Eliezer feared losing everything he had. This was in a way a driving force that kept him alive. For example, when the alarm at the concentration camp sounded and everyone had to stay in their barracks, a couple of pots of soup were left unguarded. Even though they were starving, fear overcame hunger. However, there was one Jew who was bold enough to risk his life for an extra ration of soup and who ended up with a bullet in his back. This scene cemented their fear of death in everyone’s mind.

One of the main conflicts in Eliezer Wiesel’s life is his struggle with his faith. Before the Holocaust, Eliezer was a deeply observant scholar who had devouted much of his time towards his faith and studies. His faith in God was unconditional and seemed unchangeable up until the moment he left his train car and arrived at the death camp. It was at that point in his life when he would never regard his faith with the same view again. He did not understand why the God he had spent so much time on throughout his life would just suddenly desert him and the whole Jewish race.

He felt deeply betrayed because God has let Jews be taken from their homes, brought to concentration camps, and be left to be tortured and even cruelly killed. These events are permanently embedded in his mind and caused his faith to prove not so unshakable after all. One particularly scarring event for Eliezer was when a little boy was hung because his barrack was found to be in possession of many weapons. Eliezer felt God’s complete abandonment in that He would allow such a young and innocent boy to be hung.

Eliezer’s loss of faith makes one think how easily one might lose his own faith if put in Eliezer’s same position. For it is easy to love the Lord in times of peace, but the real challenge is keeping one’s faith in God and in His unconditional love for us when profound suffering comes knocking at the door. Through seeing Eliezer’s shaken faith, we learn that the Jews did not only suffer physically, emotionally, and mentally in the Holocaust but also spiritually.

A third common theme in the story is one of death and the loss of the Jews’ humanity through their suffering in the concentration camps. The amount of torture and cruelty and stark images of death the Jews encounter in the Holocaust is unfathomable. Take for example the instance when Eliezer and his father were being transported for the last time to Buchenwald concentration camp. When their open train car passed through a town, the townspeople thought it would be entertaining to throw bread into their cars and then witness the savage pandemonium that would ensue.

The Jews in those cars were at the point of dying. Frozen and starved they would lose all human decency and actually fight to the death over a piece of bread. At this point there were no morals left among the Jews for their suffering was so profound that they began to lose their humanity and act like animals. This dehumanization of the Jews can be further demonstrated in comparing their corpses to sacks of flour. When dead bodies were thrown out of the train cars or into the crematoria, no respect was shown to the humanity of that Jew.

The concluding image of the corpse in the mirror succinctly sums up the themes in the book. The Jews’ fear of death prevented them from acting rashly which might have gotten them killed but it also prevented them from taking bold steps to ensure their survival (for example, stealing food). The corpse image represents Eliezer’s loss of faith because by denying the existence of a loving and merciful God he is denying his dignity in being created in the image of God. And thirdly, the corpse is a clear representation of death and one’s loss of humanity in the wake of immense suffering that strips you of your dignity and worth. In conclusion, the suffering of the Jews in the Holocaust was so profound that they were affected on all levels beginning with being physically, mentally, emotionally, and spiritually affected to being treated like animals stripped of all self dignity and humanity.

A Reflection Paper on Night by Elie Wiesel. (2016, Aug 12). Retrieved from https://studymoose.com/a-reflection-paper-on-night-by-elie-wiesel-essay 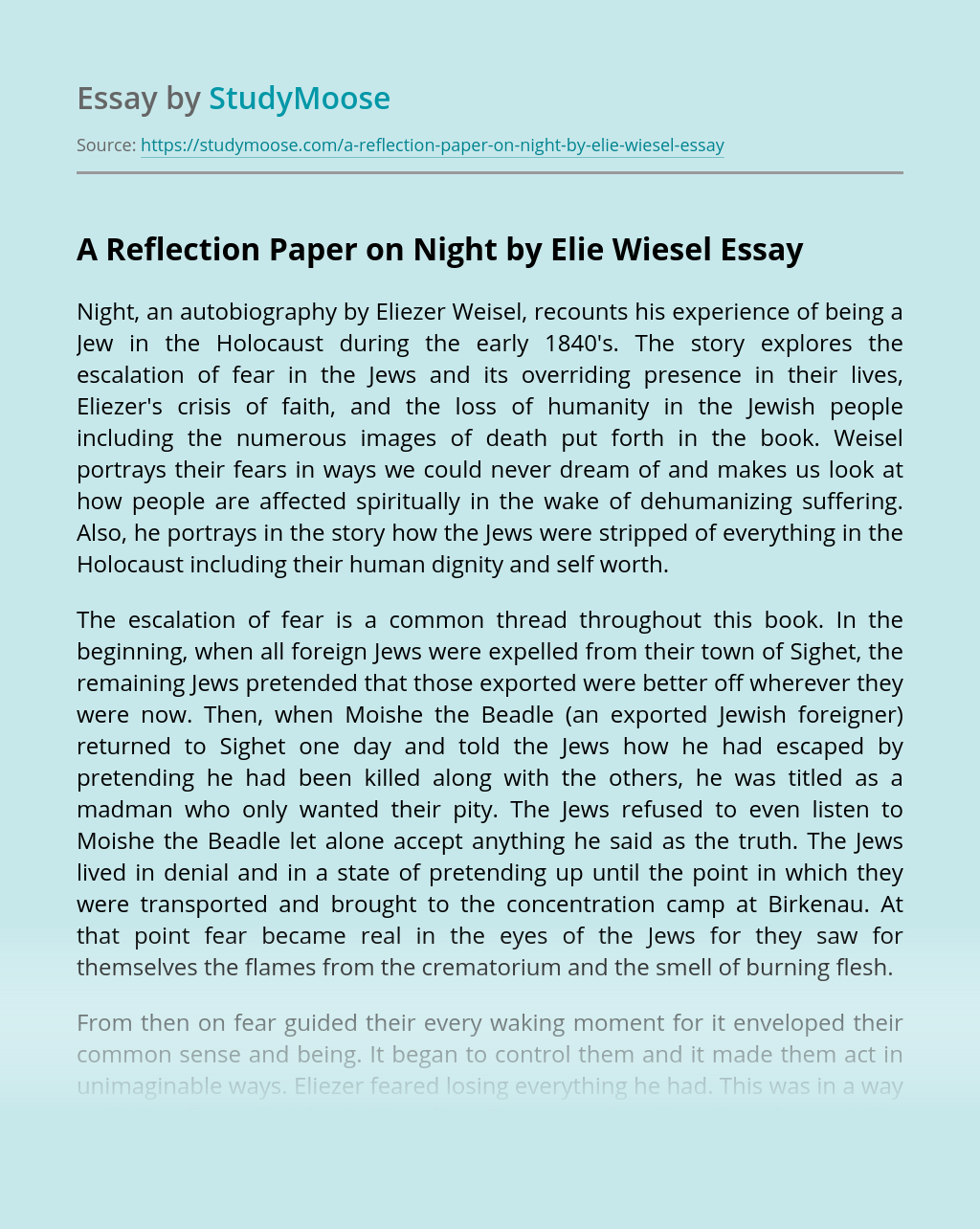 Turn in your highest-quality paper
Get a qualified writer to help you with
“ A Reflection Paper on Night by Elie Wiesel ”
Get high-quality paper
Helping students since 2015
Stay Safe, Stay Original