This current semester, I am taking Introduction to Film. I decided to take the class only because it was in a convenient time slot, and not because I had any interest in taking the class. I am, however, enjoying it; for instance, we watched Quentin Tarantino’s, Reservoir Dogs — it was the first time I had ever seen the film, it was weird, but cool. Anyway…

The first major paper in the class is a scene analysis. We could pick any movie, any scene.

Don't use plagiarized sources. Get your custom essay on
“ Mise En Scene ”
Get custom paper
NEW! smart matching with writer

I choose the movie, Saving Private Ryan; hopefully you are able to figure which scene via my essay…

The world as we experience it through our own senses is limited in its scope to the singular perspective. In film, however, using the same setting with the use of many different camera angles and positions, producing shots that are choreographed with crisp sound into a sequence, can take even an otherwise boring event and present it as epic.

Filmmaking has the ability to broaden perspective — exponentially. In an essential scene in Saving Private Ryan, the film maker manages the elements of cinematography, sound, setting and editing to grab the audience’s attention and put them on edge for what will be coming next.

Released to theaters on July 24, 1998, and the winner of five Academy Awards including a Best Director Oscar for Steven Spielberg, Saving Private Ryan quickly became the benchmark for what a movie depicting war should aspire. Written by Robert Rodat, the story begins with an elderly James Francis Ryan (Harrison Young) recalling a time during World War II when a squad of United States Army Rangers, led by Captain John Miller (Tom Hanks) and Sergeant Horvath (Tom Sizemore), is ordered to locate him to ultimately send him home because he was now the only remaining son of four — his three brothers were all killed in battle.

His memory starts with the Rangers landing on Omaha Beach during the D-Day invasion of World War II, and follows them as they seek to locate him, the soldier, Private James Francis Ryan (Matt Damon).

From the first scene of the film that presents the story, the audience is thrust into the horrors of war. This scene is the delicious appetizer that prepares your palate for the main course; without it, the meal would be ordinary. The scene presents the United States’ invasion force making its way via landing craft to the guarded shore of the Normandy coast during World War II. The scene begins with an introduction to the time and place that the event occurs, and then depicts the journey the soldiers must endure to step foot on solid ground while plans to repel them are in full swing by the Germans.

The setting begins with a view of a beach’s shoreline looking out to the ocean with an overcast sky. The beach is strewn with a multitude of ominous manmade obstacles designed to make any attempt to reach land via the sea an unpromising endeavor. During this shot, the words, “June 6, 1944” and “Dog Green Sector, Omaha Beach” provide the audience with the time and place the film’s story begins: D-Day, World War II.

A majority of the scene is shot in the hold of a period-correct, infantry landing craft as it moves toward the beach. As the craft makes it to the shoreline, the audience views the destination, Omaha Beach. The beach consists of a wide plain of sand that extends from the shoreline to the cliff that has embedded a large menacing concrete bunker that towers over everything in view. The setting’s design and layout gives the audience the impression that any successful landing by the troops is impossible.

During the scene, the chaotic movements and skillful positioning of the camera give the audience a feeling of actually being on the landing craft and a part of the strike force. Whereas the scene focuses mainly on the members of a single landing craft, you are made aware that the attack force is much larger because of a brilliant high angle shot. The camera is positioned in such a way that a multitude of similar craft is in clear view, and all are moving in a parallel formation making their way at high speed for the shore; moreover, each craft is full of soldiers facing toward the bow ramp with salt spray breaking over the bows as their vessel charges through the moderate seas.

While focusing on the main craft, holding members of Captain Miller’s squad, the camera is positioned at eye-level as it records individual, medium close-up shots of the various soldiers onboard. The camera moves with the boat as it makes its way through the water and provides a visual sensation for the audience of personally being there and gazing into the soldier’s eyes – an emotional connection with the subject is formed.

As the craft prepares to lower the bow ramp to allow the soldiers to storm the beach, the camera is positioned for a level, over-the-shoulder view from coxswain’s perspective at the wheelhouse at the craft’s aft end. The shot includes a rear view of the soldiers anxiously awaiting the bow ramp to fall, and in the background high on the cliff, the concrete bunker waits.

Just as the bow ramp falls, the bunker unleashes hell upon the soldiers in the craft. Bullets rip the flesh apart of those unfortunate souls that were positioned most forward. The next camera shot is an over-the-shoulder, high-angle shot from the operator of the one of the MG-42 machine guns in the bunker looking at the landing craft centered on the shoreline below. The camera tracks behind the silhouetted gun placements as they fire with ease upon the helpless landing craft below. The camera’s positioning in this series of shots gives the perspective of complete dominance by those in the bunker over those on the landing craft.

One instance of the editor’s impact is the timing of the straight cuts to and from the gun placements firing upon the occupants of the landing craft, and the series of cuts made to shots of the carnage within the craft. This micro section of the scene speaks volumes as to the condition on the battlefield and leaves the audience with a bleak prognosis for the attack force’s success.

The scene begins with a transition from the film’s opening scene with the peaceful sounds of the surf lapping the shore line. As the scene moves forward, the ambient sounds increase with their intensity and frequency. The sound of the diesel engines that propel the craft becomes less noticeable as the sounds of battle start to increase in both volume and occurrence as the craft nears the shore.

After the bow ramp is lowered, accompanied by a loud ratcheting sound of gears mashing together, the soldiers are soon forced into the water because of the heavy machine gun fire emanating from the bunker. The sound of bullets hissing with the simultaneous sounds of human flesh being literally torn apart is unnerving, and makes the audience wince with despair – how can these men be saved? It is then that the soldiers are forced to escape over the side of the craft, and the ambient sound abruptly turns from the din of battle to the muffled, strangely peaceful sound one would hear while completely immersed in water. The sound presents a short respite for the audience, just long enough for a short breath before the battle continues under the water.

As the soldiers attempt to make their way to shore, bullets break the underwater peace with unpredictable zipping sounds; the bullets occasionally find their mark.

The scene ends as Captain Miller finally reaches the shore, and as he looks and tries to comprehend all of the bloodshed occurring around him. His mind seemingly blocks out the sound, diminishing it to a dull resemblance of its previous clamor.

Throughout the history of film making, be it stories of the conquests of ancient times or more recent conflicts, filmmakers have attempted to capture the essence of war. Not until the movie Saving Private Ryan has the dreadfulness of combat been delivered with such intensity and believability. The editor’s timing and placement of the magnificent camera shots and recorded sounds masterfully allows the audience to feel we are a part of the action; we become immersed in the story. It is because of this single four minute scene, the audience becomes vested in the narrative. It is no wonder that Saving Private Ryan won Oscars that included one each for cinematography, sound, sound effects editing, and film editing — no wonder at all. 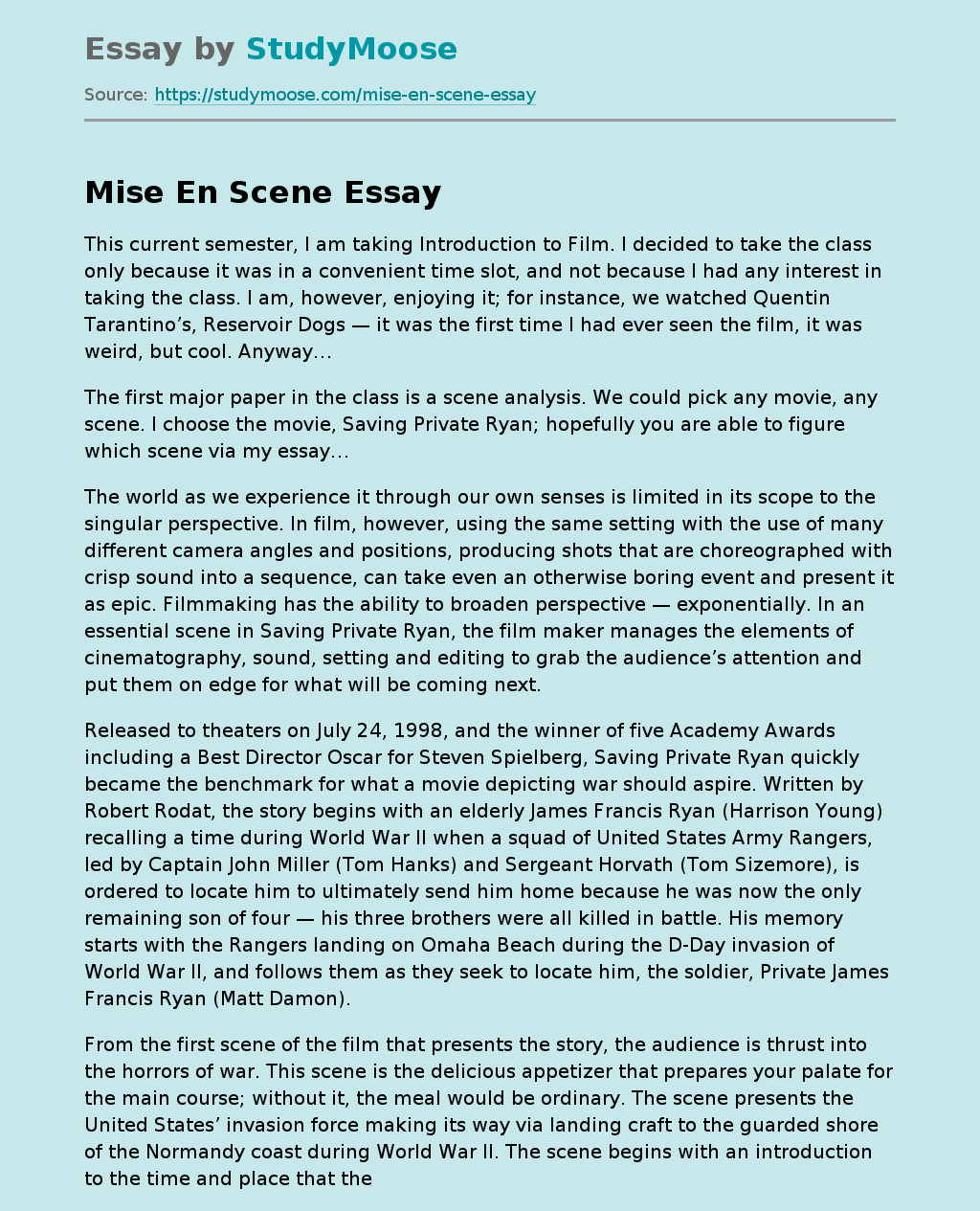