The paper is about ESP course in technical secondary school to construct the trade students. The paper first discuses the meaning of ESP and then tells about its characteristics. It discusses the role of English as a trade and finance language globally and then further narrates the various steps that are being taken by various countries’ governments to promote English for Specific Purposes programs for its workforce.

The paper reflects that these governments understand the importance of introducing ESP courses at secondary level so that their people can comfortable choose the vocational field of their own choice.

Don't use plagiarized sources. Get your custom essay on
“ ESP Course at Technical Secondary Vocational School for Construction and Building Trade students ”
Get custom paper
NEW! smart matching with writer

This paper offers a research of made efforts especially by Asian countries.

There are three reasons for the emergence of ESP (Kristen Gatehouse, 2001):

i) The revolution in linguistics; ii) The demands of a Brave New World and iii) Focus on the learner

• ESP is to fulfill some particular requirements of the learner.

• ESP can have some particular disciplines.

• ESP is mainly planned for intermediate or advanced students.

• ESP is planned for adult learners who can be at secondary level also that is in a professional work situation.

According to Dudley Evans and St. John (1998), there are five major roles for an ESP practitioner: i) course designer; ii) teacher; iii) researcher; iv) collaborator and v) evaluator (Kristen Gatehouse, 2001).

• English with some particular topics

• English for Occupational and Academic Purposes both

• English as a Restricted Language

English with some particular topics transfer from purpose to topics and it is generally used by the scientists.

English as a Restricted Language is used by traffic controllers and by waiters (Kristen Gatehouse, 2001).

Dudley Evans (1997) has argued that ESP should be recommended at secondary or intermediate level. His argument was that at this stage authentic leaning material is very practical that can be modified and unmodified in form which makes it ESP’s main characteristic. It emphasizes on self directed study and research tasks. Most of the students were evaluated on the basis of independent study assignments for doing language preparation for Employment in Health Sciences where the learners needed to make researches and they had to show their area of interest. The students were motivated to make researches by using various kinds of resources including internet (Kristen Gatehouse, 2001).

In the 21st century the function of English has become as the language of trade, technology and finance. This language is bonding the rest of the business world for international trade and economic development.

The children who belong to this globalize age, it has become necessary for them to get hold of the communication abilities in English as a business and trade language (Dorothea C. Lazaro and Erlinda M. Medalla, 2004).

As ESP program is spreading in various countries on different levels, in Czechoslovakia it began in 1991 that aimed to promote the teaching of ESP in the Technical Universities and their allied institutions (Serena Yeo, 1995).

Presently the aim of the course is almost same but there are some changes to use it at some broader aspect to make it more influential. It aims to increase the confidence of teachers at secondary level. Various kinds of seminars are conducted by the advisors for the university lecturers and ESP teachers of vocational and specialist secondary schools (Serena Yeo, 1995).

In many developing countries of Asia, the altering demands of the labor force are daring the utility of traditional schooling and university education. People want the assurance the skills and the language learned at school will help them professionally.

In Japan, ESP is being widely recognized and ESP training programs are being given importance. The main idea is to motivate the students by improving their communication skills which later help them to adopt the professional field of their choice.

Now there is a hope that these motivations on various levels in many countries can have a bright future for ESP that is being understood a major effort to build the future of students professionally or vocational level. For making it more successful the role of teacher is also being assumed very significant. So it can be observed that the teaching of ESP at vocational level is very much demanding everywhere in schools. 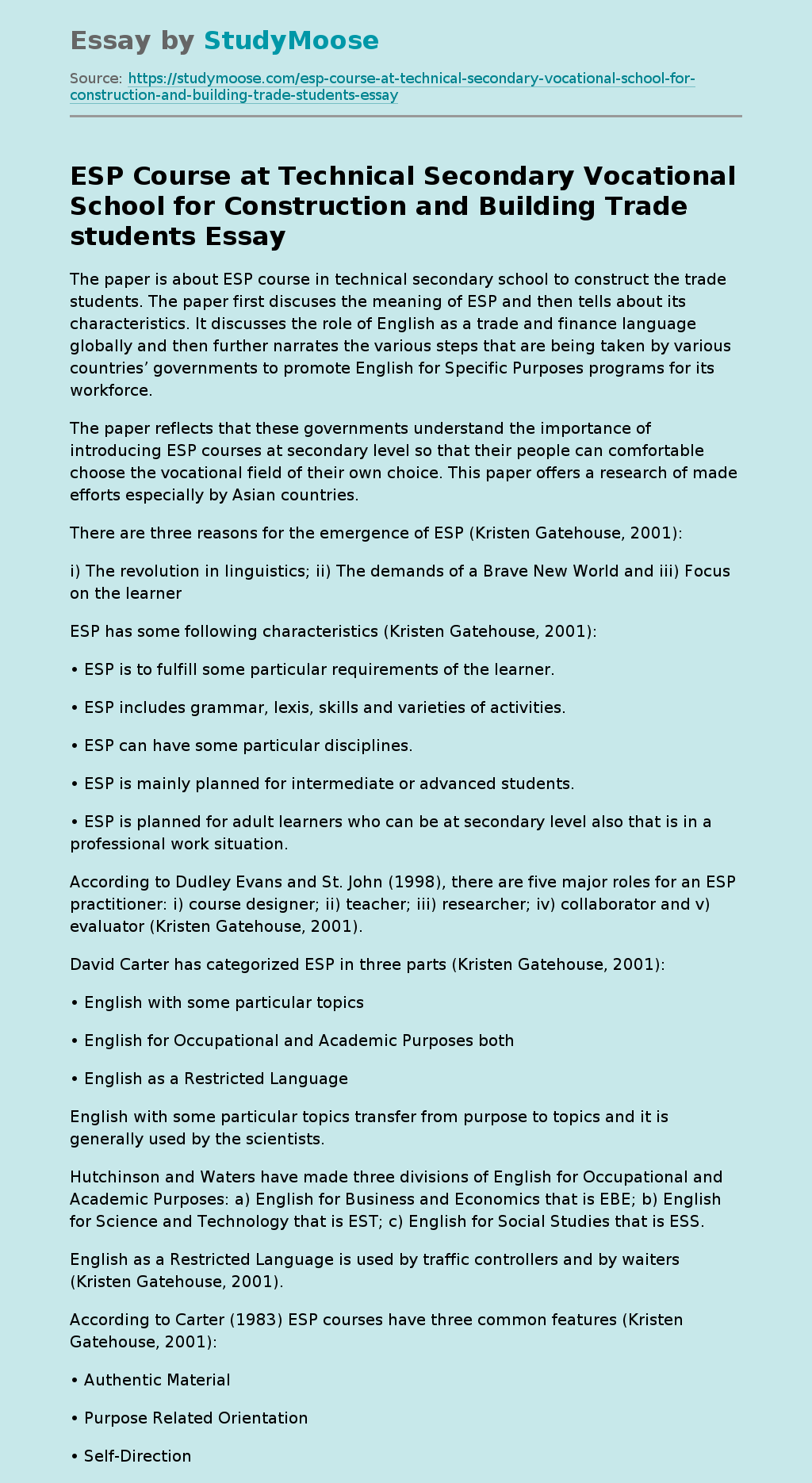