Is “Free Trade” Fair Trade? Yes or No?

It is very important to study the course on domestic controversial issues because by means of critical evaluation one can find and weigh all pros and cons of almost any critical problem in a contemporary society and then come to a proper conclusion . The importance of domestic controversial issues subject rises nowadays because of huge flow of false information created by global interdependence, inner-country agitation and attempts to hide the truth from the public. To prove that point of view, we want to take a closer look to a global process of free trade and examine whether it is fair for all, involved in it or not.

Don't use plagiarized sources. Get your custom essay on
“ Is “Free Trade” Fair Trade? Yes or No? ”
Get custom paper
NEW! smart matching with writer

The phenomenon of  free trade has become increasingly predominant in the modern world. Trade relations are among the most important links between countries. Free trade is fair because it is lawful, profitable and accessible for every country. It exists within trade agreements between countries which are signed on voluntarily basis. Special institutions observe trade relations and ensure the implementation of  all terms of treaties.

Every country has a right to choose the most appropriate trade regime for itself. Nothing can stop two countries from establishing free trade zones.

For example, United States has bilateral trade agreements with Canada, Mexico, Israel, Jordan, Singapore and Chile. It is true that free trade relations are very profitable. They give great opportunities for both, trade and further political cooperation among countries. President George W. Bush said that “free trade advances the “universal value” of eradicating poverty, advancing human freedom, and cleaning the planet.

”[1] Recently Australia has signed a free trade agreement with the United States, but it has not ratified it yet.

According to the New York Times’ article “Congress Vows Action on Australian Trade”, if the agreement goes into effect, 99 percent of industrial goods in both countries will become duty-free immediately. That will result in an estimated $2 billion annual growth in exports of U. S. manufactured products. [2] Indeed, free trade is lawful enough. From this point of view it should be regarded as totally fair for all. But is it really true that accessibility to free trade will provide positive results to every country and eradicate poverty? In reality free trade is not a cure from all “world’s ills”[3].

Yes, it opens great opportunities, but not for every country. In most cases free trade agreements are concluded by developed countries, not by developing. Developed and developing countries have unequal opportunities for cooperation. Developing countries can not be equalized neither in their trade positions nor in their development with advanced industrial entities’ level and “free trade” transforms into cooperation of exploiter and exploited or some of the countries are just left aside as Cuba in G. Bush’s efforts to create a free trade zone for Americas as Karen Ann Gajewski admitted.

[4] By means of free trade rich countries may become richer and poor countries remain poor. Dani Rodrik, one of the world’s leading trade economists, found that neither trade nor capital liberalization was strongly linked with development. Indeed, in a summary of the report he wrote, “if anything, the evidence for the 1990’s indicates a positive relationship between import tariffs and economic growth. ” He added that current proposals for free trade are “bad news for the world’s poor. ”[5] It is difficult to make unanimous conclusion concerning free trade.

On the one hand, it really opens great opportunities for developing countries of the world. From this viewpoint “free trade” is a fair trade. But on the other hand, by means of free trade the gap between rich and poor countries rises as free trade cannot guarantee good results for everyone. From such perspective the only successful survivors can be developed countries of the West as only they can survive and benefit from such tremendously tight competition in trade. In this instance “free trade” is an unfair trade. 1. Gallagher, Kevin. “The Panacea Myth – George W. Bush, free trade – Brief Article. 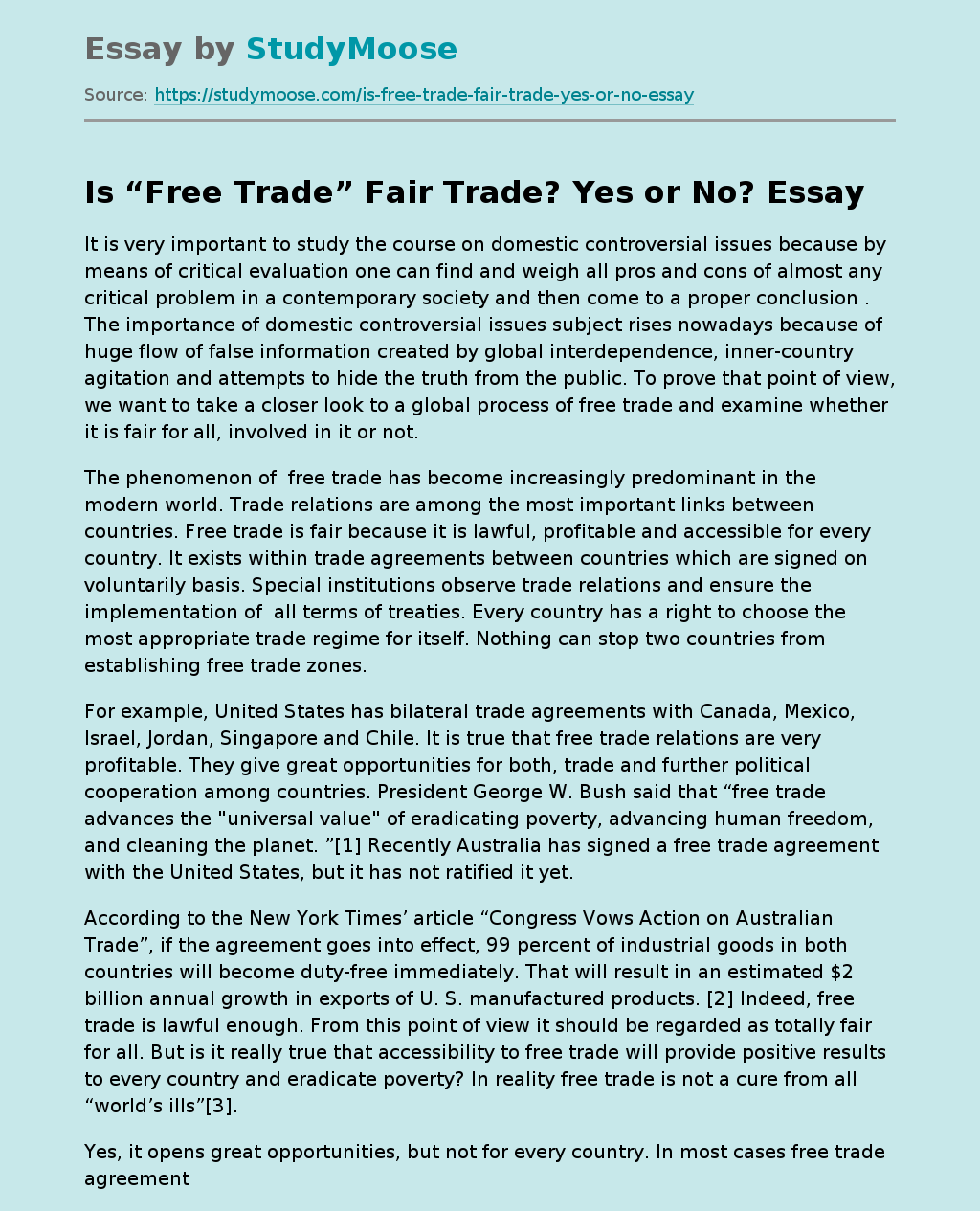