Yes We Can by Barack Obama

In Obama’s campaign speech presented on January 8th 2008 there are continuous techniques that he uses to persuade the audience to vote for him. He slowly establishes a rapport to create a sense of equality between him and the audience; he does this by using first person plural, such as ‘we’ which is effective because it makes all the people feel united and as if he is directly talking to them as a person. He also uses abstract nouns like ‘hope’ to make an emotional appeal to the American people and to suggest that there is a new start in the future.

Turn in your highest-quality paper
Get a qualified writer to help you with
“ Yes We Can by Barack Obama ”
Get high-quality paper
NEW! AI matching with writer

This is important for him to try and get more people of all ages to vote and see his point of view. Obama also repeats ‘Yes We Can’ nine times, by using the phrase ‘yes we can’ he inspires people to have trust and hope in Obama to lead them to a better future and to declare that he can help America.

He uses a historical reference in one of his lines ‘it was a creed written into the founding documents that declared the destiny of a nation’ this is a reference to the beginning of America when everyone was equal.

Obama uses religious imagery throughout the speech for example ‘creed’ to appeal to a wider variety of American people. In the first paragraph he also uses a scale in the quotation ‘nothing can withstand the power of millions of voices calling for change.’ to make the people aware of the changes and differences he will make if he becomes president.

All the way throughout the speech he uses lots of ‘we and we’ve’ which tells the American people that they are all united and creates a sense of togetherness. After he says ‘Yes We Can’ he then says a short paragraph which adds effect and structure to the speech. In the fifth paragraph Obama uses auxesis to build it up, quotation ‘it was the call of workers who organized; women who reached for the ballot; a President who chose the moon as our new frontier; and a King who took us to the mountaintop and pointed the way to the Promised Land.’

When he is talking about a king he is referring to Martin Luther king and how he inspired him to do what he has done so far. This is extremely important to American people. In the last paragraph Obama uses abstract nouns like ‘hope and dreams’ to show a dream that could become true if he became president. He also uses a lot of first person plurals to end with idea that it won’t be him you will be voting for but you would be voting for everyone that agrees with him. When he says the last couple of sentences he states every word to give them more effect and make his point clear, he also uses sibilance ‘sea to shining sea.’ And then finishes with Yes. We. Can. This is effective because it leaves the people thinking that they can succeed and makes them believe.

Yes We Can by Barack Obama. (2016, Aug 26). Retrieved from https://studymoose.com/yes-we-can-by-barack-obama-essay 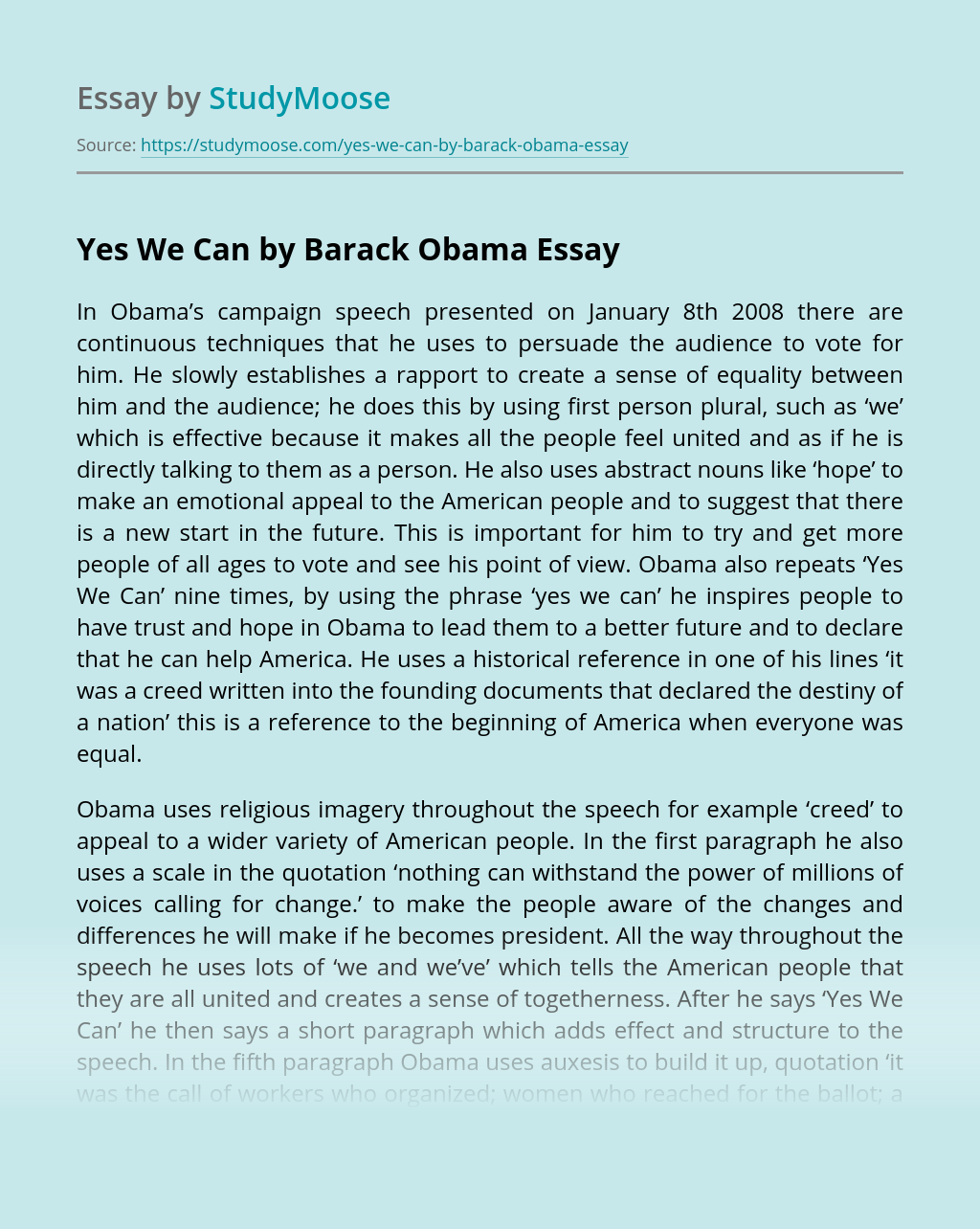 Turn in your highest-quality paper
Get a qualified writer to help you with
“ Yes We Can by Barack Obama ”
Get high-quality paper
Helping students since 2015
Stay Safe, Stay Original