The Analysis of Obama's Victory Speech

Senator Barack Obama’s victory in the U.S. presidential election was celebrated in his hometown of Chicago by hundreds-of-thousands of supporters who reveled in the history-making moment. In a large, open-air park, Obama thanked his supporters, and outlined the challenge he hopes to make as president. He is the first African-American elected president of the U.S.

US President-elect Barack Obama’s Rhetorical skill, his ability to captivate and inspire audiences with his powerful speeches, has led some writers to describe him as the greatest orator of his generation.

Don't use plagiarized sources. Get your custom essay on
“ The Analysis of Obama’s Victory Speech ”
Get custom paper
NEW! smart matching with writer

In the next chapter, the writer will try to analyze the speech Barack Obama made in Chicago on the day of his being elected to the post of President of the USA, Wednesday 5 November 2008.

On November 4, 2008, Senator Obama made history as the first African-American elected president of the United States. Obama gave his victory speech to an emotional crowd in Chicago. He delivered a victory speech at Grant Park in Chicago, Illinois after winning the U.

S. election becoming the 44th president of the country. In his victory speech, he does not seem to be using any notes. He spoke about the Major issues facing the U.S. and the world today.

This is the kind of speech with powerful, positive, persuasive and emotionally engaging. We can observe from his famous speech how does he using words, voice intonation, pronunciation, and body language to build the communication with his audience. Through this crucial device, he evoked specific images, creating memorable mental pictures in the audience.

The images were developed through words, gestures, intonation, and audience participation. The more he created images and built a new vision of America, the more he swayed the audience to his side. When Obama is speaking, he looks so confident and calm with his conditional movement. His arms move, but his body orientation does not change.

In addition, he does not let his arms get too far away from his body and he keeps his hands closed, instead of open. His gesture and his posture is controlled. His limited pitch range enables him to convey passion without exhibiting it Obama found a controlling and rallying call that fitted the moment and captured the mood in the entire country — that of change. The use of voice was magnificent. He put in all he could in his powerful voice because it was an opportunity of his lifetime. He used it to convince and endear himself to the voters. The Hollywood-quality stagecraft, the innovation and theatrics of performance were a spectacle to behold.

The poetic imagery was powerful and out of the ordinary. Rhetorical questions were sprayed at critical corners of the speech to strategically absorb the applauses that followed. The speech presented a dialogue with the audience who participated in the telling.

It brought to the American politics sincerity of conscience and a sensibility. It rolled impetuously in a current of eloquence. It was like a vast overflowing stream, graceful yet deep. His convictions were strongly rendered, his emotions warm and abundant. He had his eyes on his subject, his audience and occasion. This was directed to the desires, wants, instincts and emotions of his audience.

He is a transformational speaker, a gifted orator capable of inspiring and encouraging people to higher ideals and thinking. He has become a giver of hope through his words. Obama gave a powerful and presidential speech that had many of the elements we look for in a successful and engaging presentation. On the choice of words, he used understandable and simple language. That is why we could understand the message of his speech easily. He used evocative words and language, a simple language, which touches the emotions of the audience.

His speech has a good structure and content. As a normal speech, he also divided his speech into several parts that is the introduction; body of speech that is congratulations and thank you, grabs the future together, inclusion and hope; and the last is conclusion. At the beginning, he did not forget greeting the audience by saying “Hello Chicago”. First, he opens his speech with introduction “If there is anyone out there…..until…at this defining moment change has come to America”. The speech is an example of rhetorical works. One of the most notable characteristics of Obama’s style was the principle of repetition. All through, his speech depended on repetition and we can notice the repetition on the sentence “it is the answer” fourth times at every beginning paragraph in his introduction.

In this part, he tries to get attention getter from the audience. In addition, at the first paragraph on his speech he uses the repetition too, that is “who still doubts… who still wonders…. who still questions”. The words ‘who still’ in his speech shows it across time that is the past with ‘our founders’, the general present ‘our time’ and immediate present ‘tonight’. The second is body of the speech. In this part, he would like to say congratulation and thanks to every one that he knows and his rival McCain. “a little bit earlier…” He shows magnanimity in victory. Praising the defeated, not ignoring or trampling on him. Thus, it is showing signs of being a great leader. Next, we will hear that he starting a sequence of thanks. Start from thanking the family and than thanking the team.” I want to thank my partner in this journey… I would not be standing here tonight without the unyielding support of my best friend for the last sixteen years,.. to my campaign manager”.

In addition, we will hear he said, “It belongs to you. It belongs to you”. The repetition on the sentence” it belongs to you” means to attract and bringing the audience in. In addition, in this last part, he uses powerful evocation by saying the words ”your victory”. It also means that your victory today is your responsibility tomorrow. “we as a people will get there” in that sentence infer that we as a people will get there, grab the future together. In the inclusion, it divided into three basic parts that is people, country and Republican Party. In Inclusion, it shows that Republicans share the same basic values. Thus speaking is to all Republican voters. In here he using repetition again with using the words “to those” “America can change.

Our union can be perfected. And what we have already achieved gives us hope for what we can and must achieve tomorrow.” Evocation of hope in achievements past. In the final words: ‘must achieve tomorrow’. Confirming the necessity of what must be done. Next we will hear he spoke” yes we can” for the sixth time. It is to show that they will creating a united voice. Moreover, in the last part, or conclusion he spoke about the challenge and call to action III

Barack Obama’s speech in Chicago following his victory in the US election was a fine example of the rhetorical brilliance that helped him defeat Hillary Clinton and John McCain. Obama is using the same simple techniques that every other inspiring speaker uses but the power and impact of his language remain undiminished. It’s commonly thought that effective orators are blessed with a mysterious gift, but all successful speakers use the same simple techniques, and have been doing so at least since they were first taught by the ancient Greeks. What makes outstanding speakers stand out is the frequency with which they use them. At its simplest, the more use made of these techniques, the more impressed audiences will be.

The Analysis of Obama's Victory Speech. (2016, Apr 23). Retrieved from http://studymoose.com/the-analysis-of-obamas-victory-speech-essay 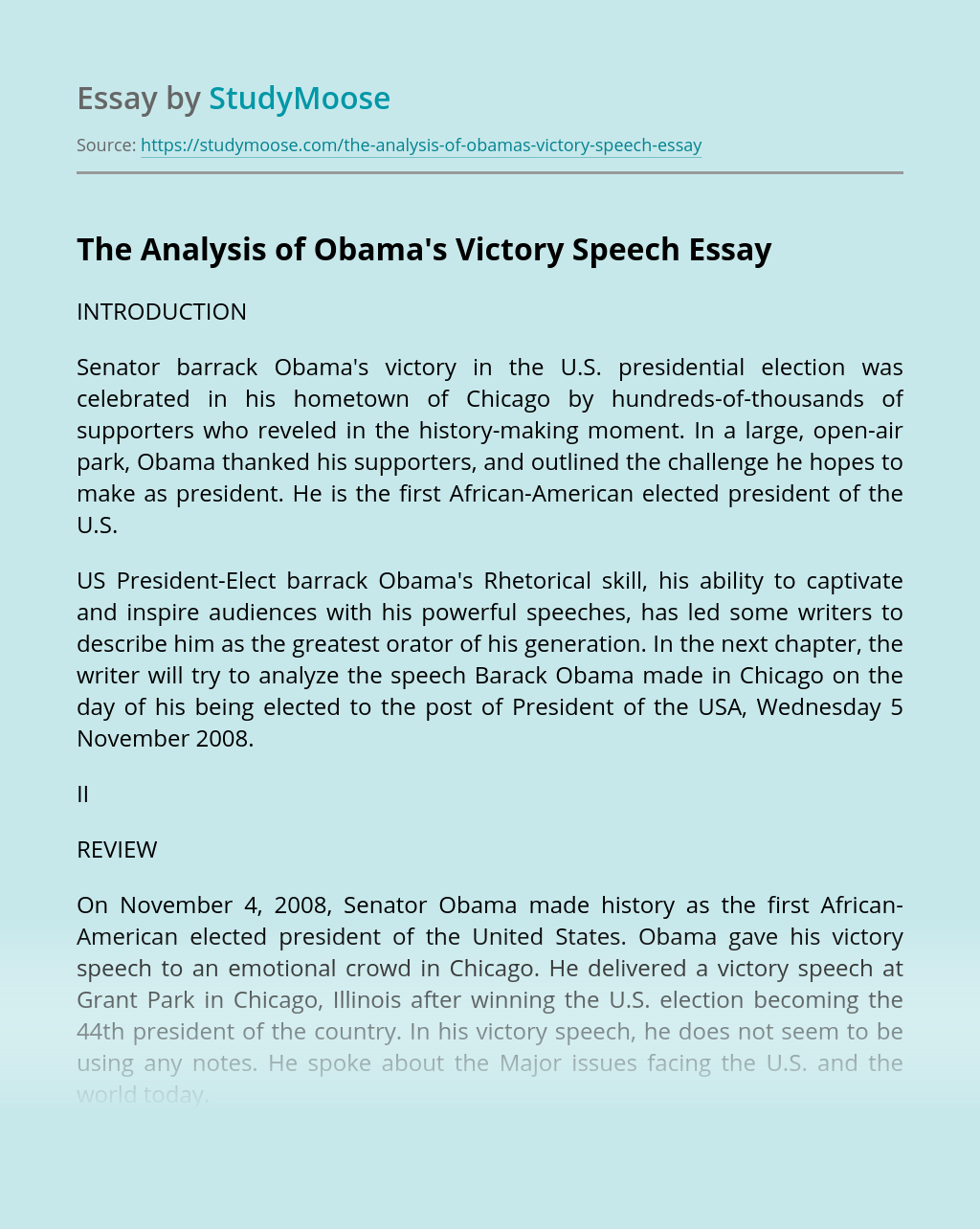