Football refers to a number of sports that involve, to varying degrees, kicking a ball with the foot to score a goal. The most popular of these sports worldwide is association football, more commonly known as just “football” or “soccer”. Unqualified, the word football applies to whichever form of football is the most popular in the regional context in which the word appears, including association football, as well as American football, Australian rules football, Canadian football, Gaelic football, rugby league, rugby union, and other related games.

Turn in your highest-quality paper
Get a qualified writer to help you with
“ Football Fever ”
Get high-quality paper
NEW! AI matching with writers

These variations of football are known as football codes.

Various forms of football can be identified in history, often as popular peasant games. Contemporary codes of football can be traced back to the codification of these games at English public schools in the eighteenth and nineteenth centuries. The influence and power of the British Empire allowed these rules of football to spread to areas of British influence outside of the directly controlled Empire, though by the end of the nineteenth century, distinct regional codes were already developing: Gaelic Football, for example, deliberately incorporated the rules of local traditional football games in order to maintain their heritage.

In 1888, The Football League was founded in England, becoming the first of many professional football competitions. During the twentieth century, several of the various kinds of football grew to become among the most popular team sports in the world.

Common elements
The various codes of football share certain common elements. Players in American football, Canadian football, rugby union and rugby league take-up positions in a limited area of the field at the start of the game.

They tend to use throwing and running as the main ways of moving the ball, and only kick on certain limited occasions. Body tackling is a major skill, and games typically involve short passages of play of 5–90 seconds. Association football, Australian rules football and Gaelic football tend to use kicking to move the ball around the pitch, with handling more limited. Body tackles are less central to game, and players are more free to move around the field (offside laws are typically less strict).

Common rules among the sports include:

Two teams of usually between 11 and 18 players; some variations that have fewer players (five or more per team) are also popular. A clearly defined area in which to play the game. Scoring goals or points, by moving the ball to an opposing team’s end of the field and either into a goal area, or over a line. Goals or points resulting from players putting the ball between two goalposts. The goal or line being defended by the opposing team.

Players being required to move the ball—depending on the code—by kicking, carrying, or hand-passing the ball. Players using only their body to move the ball. In all codes, common skills include passing, tackling, evasion of tackles, catching and kicking. In most codes, there are rules restricting the movement of players offside, and players scoring a goal must put the ball either under or over a crossbar between the goalposts.

Etymology
Main article: Football (word)
There are conflicting explanations of the origin of the word “football”. It is widely assumed that the word “football” (or “foot ball”) references the action of the foot kicking a ball. There is an alternative explanation, which is that football originally referred to a variety of games in medieval Europe, which were played on foot. There is no conclusive evidence for either explanation. 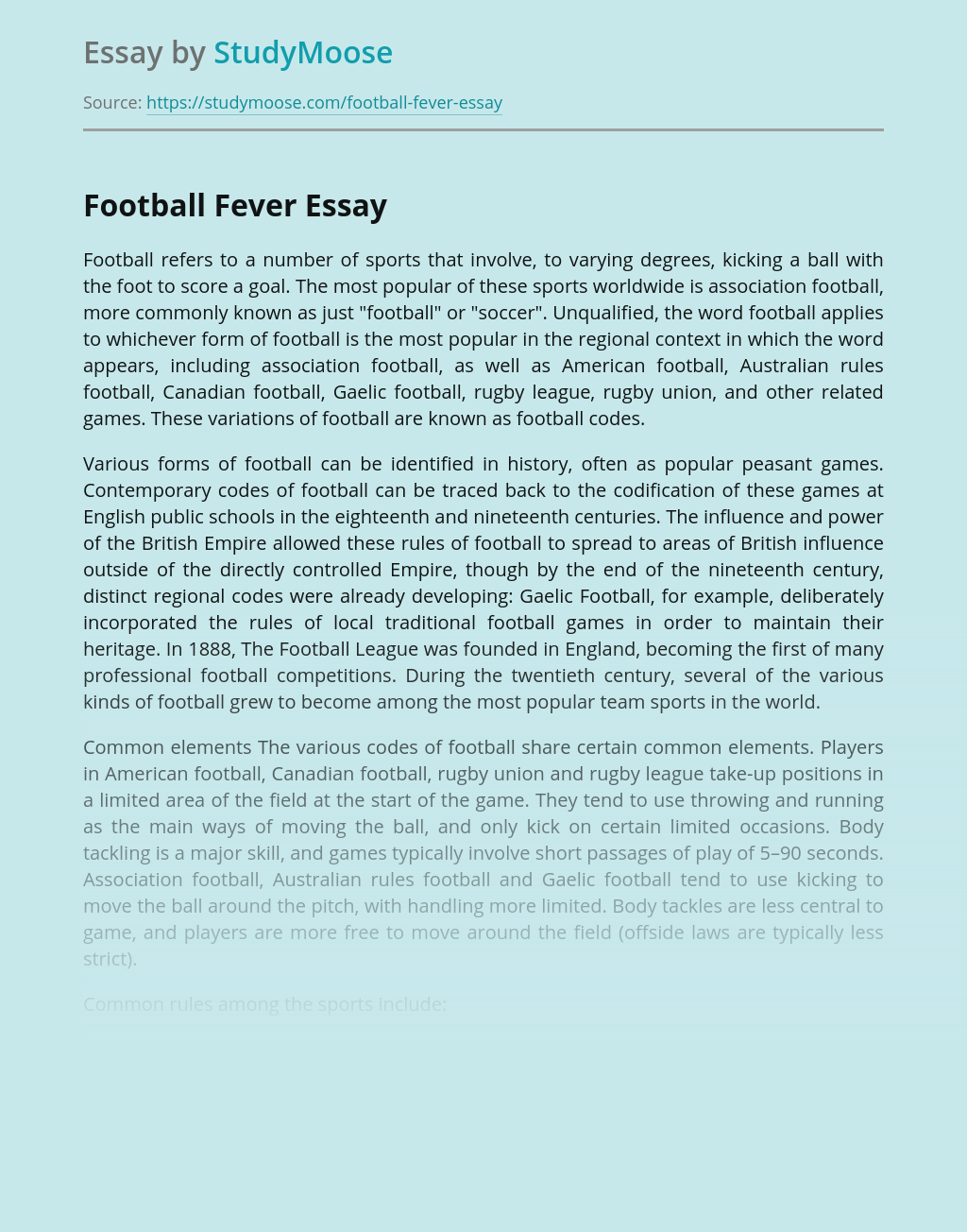 Turn in your highest-quality paper
Get a qualified writer to help you with
“ Football Fever ”
Get high-quality paper
Helping students since 2015
Stay Safe, Stay Original