It Is Difficult to Remain a Bystander in the Face of Conflict. Discuss.

It is difficult to remain a bystander in the face of conflict. discuss.

In any discussion of conflict it is important to consider the many types of conflict that can be experienced and the likelihood of remaining aloof from the ideological, emotional, physical, moral and spiritual dimensions of conflict. Conflict in general can be found in all of human history and in its reflection in art, poetry, literature and in the everyday experience of humanity. Moral dilemmas, property and border disputes, lovers’ spats, sibling rivalry, broken hearts, jealousy, envy and lust for power.

Don't use plagiarized sources. Get your custom essay on
“ It Is Difficult to Remain a Bystander in the Face of Conflict. Discuss. ”
Get custom paper
NEW! smart matching with writer

The list is long, many people have sought to find a way to remain neutral but are inevitably drawn into conflict compelled by conscience, desire or belief, or are swept up in conflict as just collateral damage. By definition a bystander is a person present at an event or incident but does not take part. Conflict can show its face in many forms. But it’s not the nature of the conflict that can draw people from the sidelines; it can be the situation the person is faced with and completely reliant on the belief they hold and their moral constitution.

A common real life example is when you pass a mugging in progress. You’re faced with a dilemma, to either help the stranger and risk physical harm to yourself or leave the stranger to his fate and remain safe yourself.

It is not the situation of conflict that pulls onlookers into the fray, but the strength of an individuals will that plays the main role in whether one becomes a martyr for a cause or cowers.

Galileo is faced with a similar situation where he is troubled by a spiritual and strong moral conflict where he must choose between science or faith. It was difficult for Galileo to remain a bystander, the inquisitive nature and the constant drive to seek the truth of how the celestial satellites behave given to him by Bertolt Brecht. Brecht used Galileo as a tool to illustrate that a man with passion can find it difficult to remain a bystander in the face of conflict “unhappy is the land where heroes are needed” Galileo saw himself as that hero, plagued with the task of educating Italy and the world. This task he bestowed upon himself resulted in much dispute between the church’s teachings and Europe. Galileo is also shown as ‘only human’ a man of flesh and blood that “enjoys the pleasures of life” but when faced with the threat of physical torture he quails. He It may be true that a person with passion may be easily stirred to rise to the challenge of a spiritual or moral debate but conflicts of a physical nature, such as open conflict or a battle between ideological beliefs allows little choice to the surrounding bystanders to remain uninvolved “sooner or later…one must take sides. If one is to remain human” in Vietnam war many people took sides but just as many were ignorant and unwilling to partake in the violence and ideological conflict that was raging throughout South-East Asia.

As the red wave of communism swept south-west endangering the old colonial powers. It was as if a hornet’s nest was struck. War pulls people, unwillingly towards it, to feed itself and to grow. The peasants were hit the hardest in the Vietnam war. “You and your like are trying to make a war with the help of people who just aren’t interested.” “They don’t want communism.” “They want enough rice,” “They don’t want to be shot at. They want one day to be much the same as another.” The peasants were used as pawns, seen as cheap human shields and laborers. The communists used villages to hide “it’s no use…After every attack the Vietcong hide their weapon and disguise themselves as farmers” using them for their own protection and gain. Equally the French and the communist used them to harvest the rice fields. ‘For in war, food is more valuable than gold’. For the peasants they had little understanding of the battles that raged around them but their ignorance did not protect them from stray bullets or mortar explosions. The quiet American explores a wide range of conflicts from the physical realm of open conflict to the ideological. Graham Greene through the polar opposite characters of Pile and Fowler illustrates that remaining uninvolved and untouched by these two forms of conflict is impossible. Through the large difference between the two characters we can see that there is no specific type of person that becomes “engage” when conflict arises but it is human nature to become involved. Fowler with age and experience, made bitter by the world and human nature and proudly unbiased in his views towards the conflict around him and Pile with youth, inexperience and a gentle simplicity of human nature.

The stark contrast is a metaphor of how anyone can be drawn into conflict, even without noticing in Fowlers case. Fowler was shocked into action by Piles simple mined motives of the bombing and the simplicity in which he saw it. “Innocence is a kind of insanity” and Piles insanity caused many to become involved. The matter in which one stays detached from internal conflict such as matters of
love is much more complicated. History and literature is ripe with stories of, kingdoms falling, Machiavellian politicians and heroes prevailing in the name of ‘love’. The human race is obsessed with the idea of love, whether it be love for one’s country, for one’s friends or one’s wife or husband. It is difficult to remain aloof from the desire and the calling we all secretly crave. Phuong is an interesting case. She managed to remain relatively independent from the two men who were fighting for her hand. This might be due to the cultural differences in the belief of love and duty of a woman, “she doesn’t love like you or I” compared to the mindset of a western woman. Greene uses Phuong as a metaphor for Vietnam. A silent, fragile thing with Fowler representing the old Colonial powers such as France and England While Pile representing the new age of America. Both fighting for supremacy over her. It may be true that remaining a bystander when one is confronted with conflict is challenging but it is not the conflict itself that is to blame.

It is difficult to remain a bystander in the face of conflict, but not for every situation. Each situation of conflict has a host of factors at play such as the type of conflict as well at the person affronted. Whether it is by choice or involuntarily our world and society is based upon conflict and how we deal with it.

It may be safe to remain a bystander when faced with conflict.

It Is Difficult to Remain a Bystander in the Face of Conflict. Discuss.. (2016, Mar 25). Retrieved from https://studymoose.com/it-is-difficult-to-remain-a-bystander-in-the-face-of-conflict-discuss-2-essay 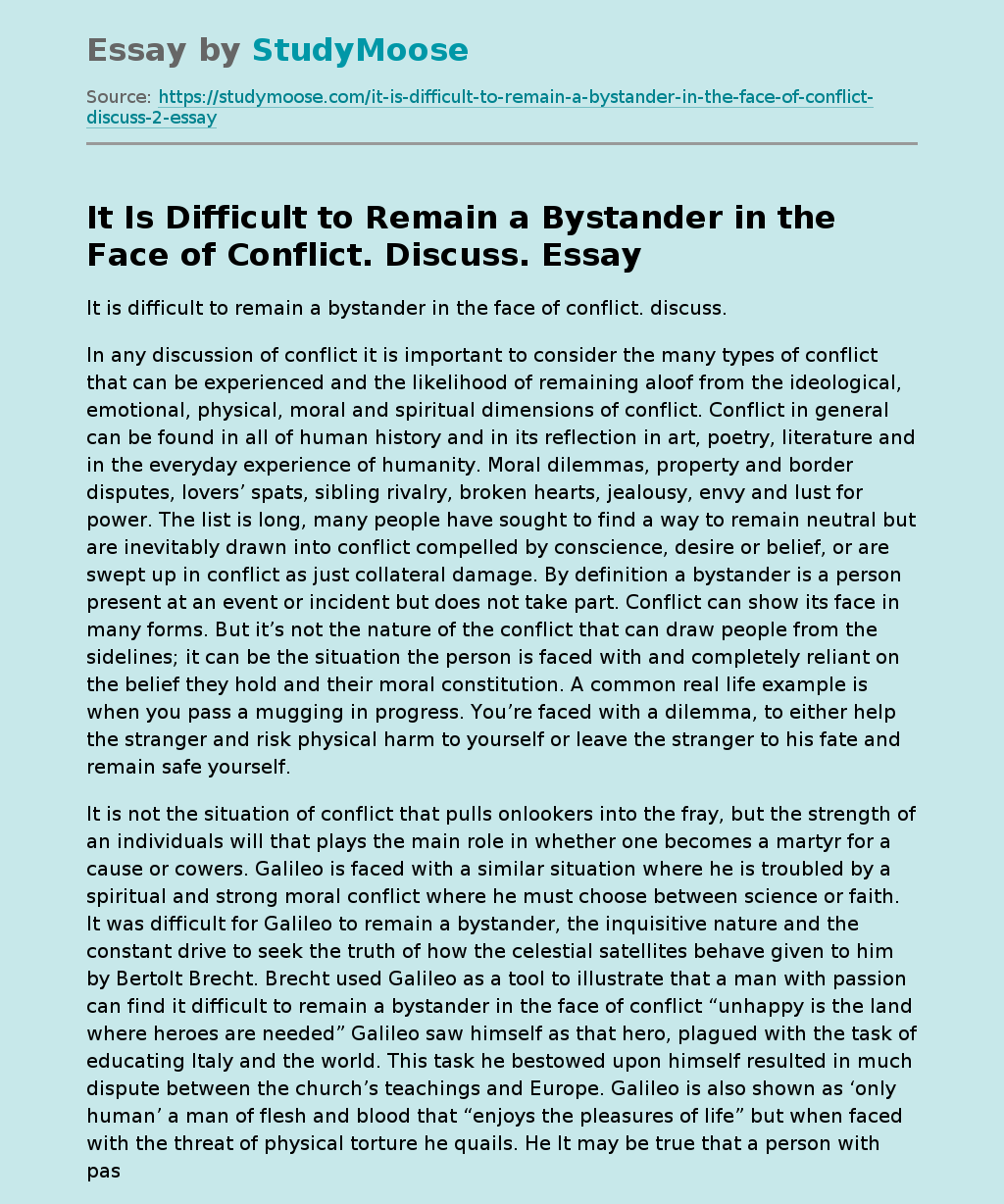