The article by Martin Gansberg, Thirty-eight who saw murder and didn’t call the police, is about an isolated event. I don’t think something like this happens a lot. Normally people would call the police or do something to help the victim. But unfortunately sometimes people can be very cold or even cruel, like in this case. Some people just don’t care about what is going on around them, if someone is in need of help or some cooperation.

Turn in your highest-quality paper
Get a qualified writer to help you with
“ Martin Gansberg Thirty-Eight Who Saw Murder and Didn’t Call the Police ”
Get high-quality paper
NEW! AI matching with writer

It’s more typical for those who live in big cities because in a busy urban life, in the crowd current they don’t have a time to stop and analyze what would be the right thing to do and they just don’t want to get involved and put themselves in troubles. In small towns people are more responsive, and the situation like this would less likely to happen. Another thing that is influent is crime and violence scenes that people constantly see on television, internet, movies.

People getting used to seeing that on tv all the time in real life perceive it like another show and just watch without any action and some of them even get excited about how it’s all going to end. Luckily I have never been in situation when I had to report a crime in progress, but I know if something happens I am not going to stand there and watch. And hopefully I will never get in situation when I’m the one who needs help and no one helps.

The opening line of the Martin Gansberg’s article “Thirty-eight who saw murder and didn’t call the police” states: “ For more than half an hour 38 respectable, law-abiding citizens in Queens watched a killer stalk and stab a woman in three separate attacks in Kew Gardens. ” But it doesn’t mean that they were staying around like in arena watching the killer slaughtering a victim from the very beginning to the end. The author uses little exaggeration to dramatize what happened. It may not be the fact but it expresses author’s position. It shows how angry and disappointed he is, it shows his condemnation.

Although writers, especially reporters, have an ethical responsibility to be accurate, little exaggeration and distortion can take a place, what can help author to express their position and their point of view. What matters is what exactly and how much has been distorted. For example, article says that the killer made three attempts to kill the woman. If indeed the victim died from the first attempt and the killer run away after that, but author changed the story to make it more dramatic, that would be very serious distortion of the story. 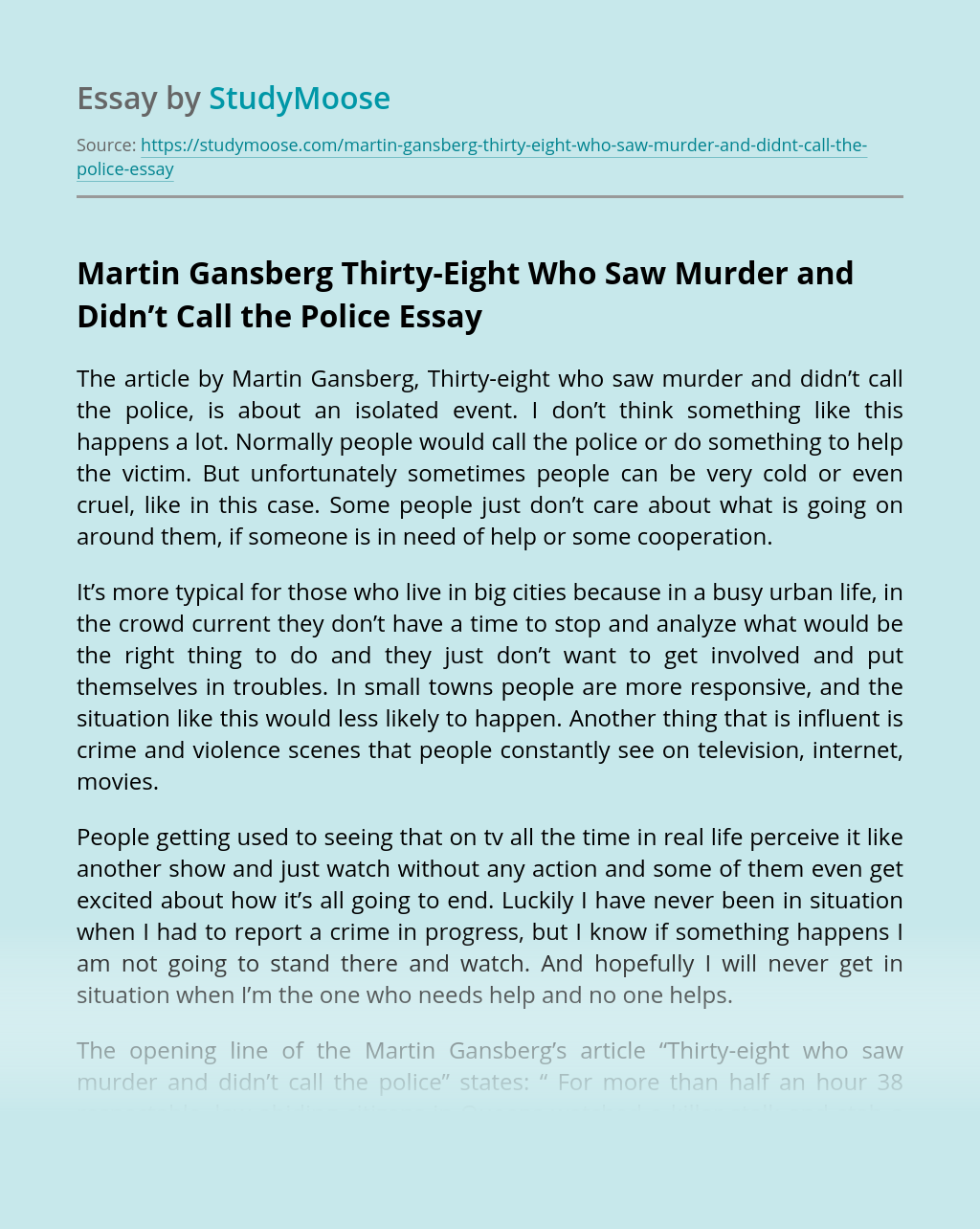 Turn in your highest-quality paper
Get a qualified writer to help you with
“ Martin Gansberg Thirty-Eight Who Saw Murder and Didn’t Call the Police ”
Get high-quality paper
Helping students since 2015
Stay Safe, Stay Original