Mericans and Response to Executive Order 9066

In both Mericans and Response to Executive Order 9066 the narrators define their identities not based on their heritage, but where they feel they belong and relate most. Both Authors demonstrate this differently within each text. In Mericans the author chooses to use the comparisons of how the narrator feels compared to how her grandmother feels and through references of American culture.

While in the poem Response to Executive Order 9066, Okita uses direct thoughts and the differing opinions of others. While both texts have different approaches to defining how individuals view American identity they both also have similar devices used such as the narrator’s own opinions and how outsiders view them.

Don't use plagiarized sources. Get your custom essay on
“ Mericans and Response to Executive Order 9066 ”
Get custom paper
NEW! smart matching with writer

In Mericans, the author utilizes the emotions of both the grandmother and the narrator to show their opinions on how they see their identities. “The awful grandmother knits the names of the dead and the living into one long prayer fringed with the grandchildren born in that barbaric country with its barbaric ways” (Cisneros).

While the grandmother sees the United States in a negative light and still strongly identifies herself with the Mexican culture and church the girl doesn’t feel the same way.

Instead she feels more connected to the American culture. Another way the author demonstrates identity differently from Okita is by using references to American pop culture:“I want to be a flying feather dancer too, but when he circles past me he shouts, “I’m a B-Fifty-two bomber, you’re a German,” and shoots me with an invisible machine gun” (Cisneros).

The use of these references show the connectivity the narrator feels towards American culture.

In Response to Executive Order 9066 Okita chooses to use different methods while still conveying a similar theme. By using the direct thoughts of the narrator it allows the reader an in depth view at the girls own thoughts on her identity. “If it helps any, I will tell you I have always felt funny using chopsticks and my favorite food is hot dogs” (Okita lines 10-11). The narrator expresses these thoughts to show that even though she is japanese that doesn’t mean she feels that way.

This is evident in her dislike of chopsticks and enjoyment of American food. An additional way the author uses a different technique than in Mericas is by using the different views of others. “You’re trying to start a war,” she said, “giving secrets away to the Enemy. Why can’t you keep your big mouth shut?” By using Dwight’s best friends’ view on her identity it shows that even though Dwight feels as though she is American others may not view her as one.

While both texts have examples of different ways of conveying a similar theme there are also similarities within the texts that serve the same purpose as well. An example of this is both authors use of the narrator’s opinions. “I gave her a packet of tomato seeds and asked her to plant them for me, told her when the first tomato ripened she’d miss me” (Okita lines 24-27).

Dwight’s own opinions are present in the text much as the narrators are in Mericas: “ I don’t mind being Ming the Merciless, but I don’t like being the Mud People” Both narrators use their thoughts to form clear opinions on topics much like their cultural identities as well. In addition to opinions another shared device is how others perceive the girls based on their looks. “”But you speak English!” “Yeah,” my brother says, “we’re Mericans”” (Cisneros). The lady assumes that the boy does not speak english just because of his appearance but in reality he doesn’t identify as Mexican.

Overall both authors use both different and similar ways of conveying the same theme of identity is not based on heritage but where one feels they relate and belong the most. Cisneros uses the methods of comparisons and pop culture to get her ideas across while Okita uses direct thoughts and others opinions. While they both do different organization they also share a few such as narrators opinions and others opinions based on looks. In conclusion both authors are able to get their point of identity is up to each individual through similar and different ways. 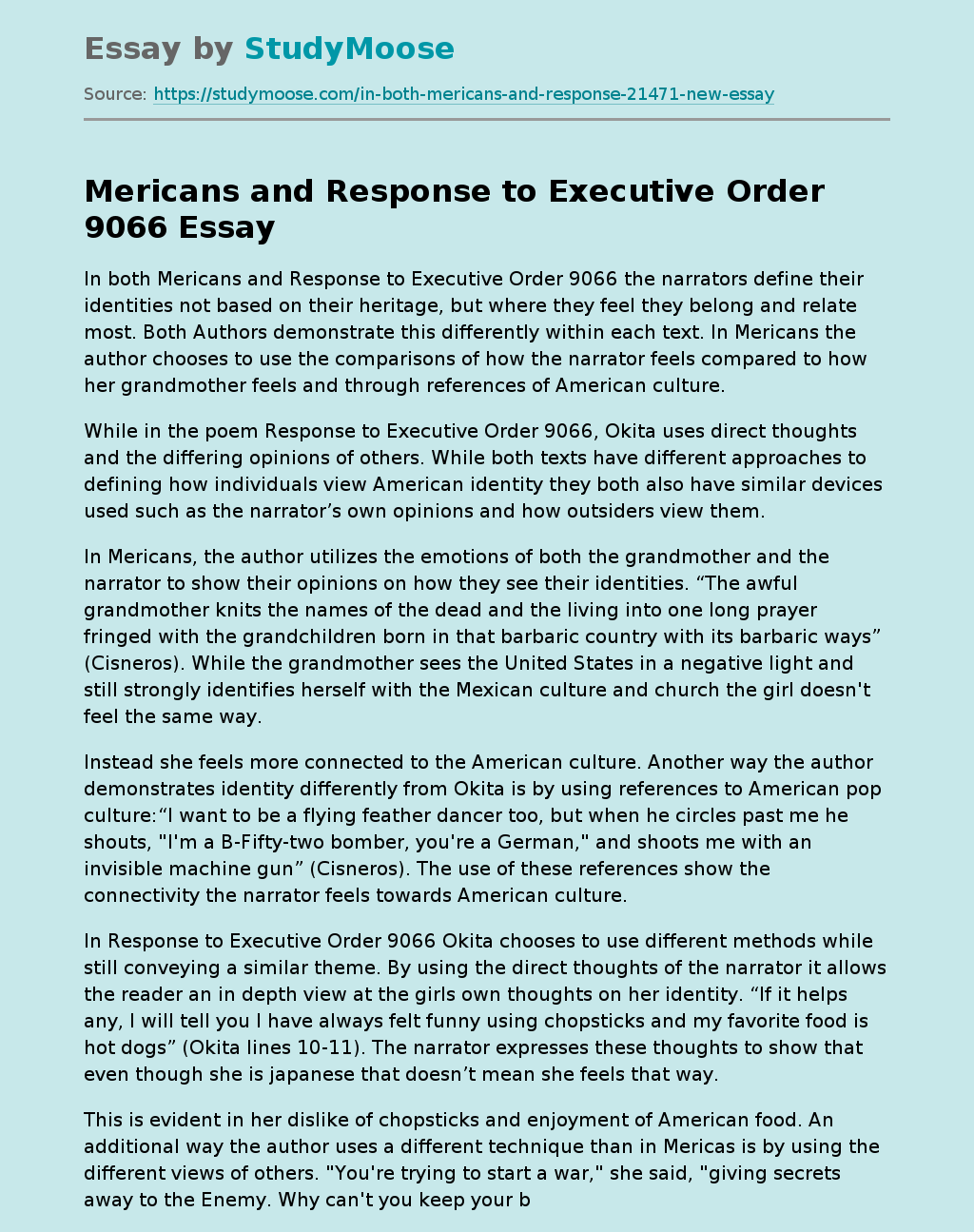