Technology has changed the way we as humans live; it changes our understanding of the way things work and changes the way we interact with one another. Technology was once opposed but is now somewhat welcomed into our homes. During the renaissance period, technology was opposed, as the church believed that technology would oppose the beliefs of god. Well they were right. Technology isn’t just computers or TV’s, its engineering science. And in Science, our goal is to progress and understand everything there is to understand about us, our planet and beyond.

Don't use plagiarized sources. Get your custom essay on
“ How Technology Affects Teenagers? ”
Get custom paper
NEW! smart matching with writer

However, the way we understand and experience this concept the most is that its just to make our lives much more efficient. When you look around, what do you see? Just at an intersection in downtown New York or Los Angeles, you see people walking around with cell phones and carrying around laptop cases, other’s just listening to music. But then the companies that build these types of technology want to make them better and more efficient.

So they keep releasing new devices that are smaller and faster and mostly more costly.

Technology in the lives of Teenagers Kevin Palmieri Friday Sept. 26, 2008 ENG 4U Ms. Murray Introduction Technology in the lives of teenagers: for better or for the worse? According to Jake Willard, an established English teacher at West Mount Secondary School, “Teenagers now are far more obsessed with technology- they cannot be without their cell phone or iPod” (Willard). This topic was chosen because from personal experience, students appear to be more disruptive and unfocused in the classroom.

Locating a main source may be helpful in the future to improving the learning environment for the majority of teenagers today. Answers and solutions have come from a personal survey conducted at Orchard Park Secondary School, own experiences, interviews with teachers, and online sources. The growth and development of technology today has been beneficial to society. However, cell phones, mp3 players, and other portable media devices taken into account are causing more damage to the learning environment of teenagers than they improving. Overview of Subject Matter From personal experiences in and around the classroom, technology has grown over the years and spread to the point where it needs to be controlled.

In the past, technology was not as big of a distraction to other students due to many reasons such as its portability. Today’s cameras, cell phones, mp3 players, and other portable media devices are compact and easy to carry. Some of these devices can have all the features built in one, which allows students to bring these electronics to school. Teens are able to send text messages, listen to music, or play games in the palm of their hand and causes students to be distracted from school work. This is not just seen from a student’s point of view. An interview with Jake Willard shared what the classroom is like from a teachers point of view when he stated, “I see much more technology used during class- many students use it to zone out, focus, or not have to interact with others” (Willard). The use of portable devices in school is not just hurting teens, but also makes it harder on teachers to do their job. There is no reason for portable media devices to be inside a school. A majority of students have noticed problems with technology affecting their grades (Survey).

Technology is not just found in the classroom, but its main use is at home on the computer. Online sources and a local survey show an increase in the internet’s use at home over the years. Teens are far more connected to their computers than in the past; they use it for instant messaging, surfing the web, playing videos games, and doing research. The use of the computer and access to the web is helpful for teenagers to find information on hard subjects to talk about to others (Pew). There are many pros and cons to the growth and development of technology, some of just many which have just been listed. Overall, technology and its increase in use should be highly recommended. That being said, although it may be important in the lives of teenagers, it must be controlled. Too much technology and media can be harmful to teens. Elaboration on Special Topics The internet’s use has spread throughout North America over the last few years. A poll conducted by Pew Internet and American Life Project showed just over half the population of teens using the internet in 2003 which was a 42% increase from 200 (Pew). This is consistent with the data collected from the survey conducted at Orchard Park Secondary School showing 100% of teenagers surveyed used the internet which is a 49% increase from 2003 proving that over time, more and more teenagers are getting connected (Appendix Fig. 5).

Teenagers now are capable of getting advanced research, and learning just about everything on the World Wide Web (www). The only problem with this is that students were 36% more likely to plagiarize work over the internet. The internet is not the only technology advances that have affected the learning environment of students. Around 90% of teenagers at Orchard Park own a cell phone and 75% own an mp3 player with 88% of teens bringing them to school (Appendix Fig 3/4.) With all this technology being brought to school, 60% of teenagers at Orchard Park found themselves being distracted by technology around them. Over half of teenagers who owned a cell phone were likely to be text messaging each other periodically throughout the day, along with 93% of teenagers owning an mp3 player listening to music on average of 2.5 hours per day (Pew). What does this mean? It means that this could be one of the major causes as to why 50% of teenagers at Orchard Park found their grades dropping as little as a few percent (Appendix fig. 10). Some people may not find a few percent to be that big of a deal; however, applying for university and setting the path a teenager will take in life might depend on every bit. This is why technology in the lives of teens must be controlled.

Technology will only continue to improve; it is our way of life, and some teens take it for granted not knowing the consequences. Recommendation Teenagers today are the teachers, engineers, social workers, and trades people of tomorrow. Education is essential in the lives of teens, and must be taken seriously. The use of internet and access to computers is an important aspect of learning and should continue to grow and be applied in school learning. Mp3 players, cell phones, and other portable media devices should be banned from schools. Studies and the survey conducted at Orchard Park Secondary School have shown a trend in grades and overall focus level go down. High school sets the future paths that students will take in life. Unnecessary distractions are only holding students back from their full potential. Technology plays an important role in the lives of teens, and has its pros and cons. Technology is continuing to improve and is for the better, as long as it is controlled. 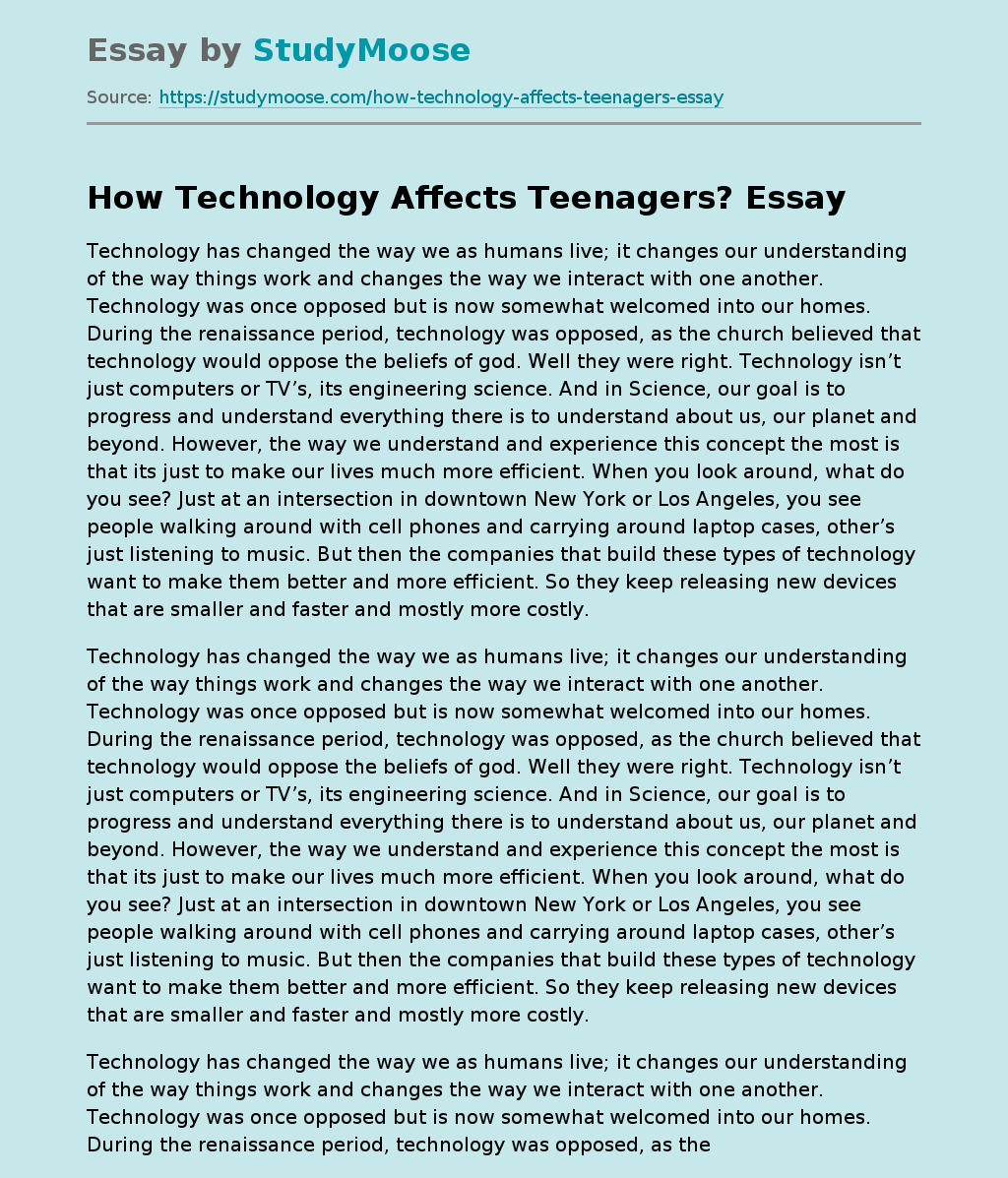